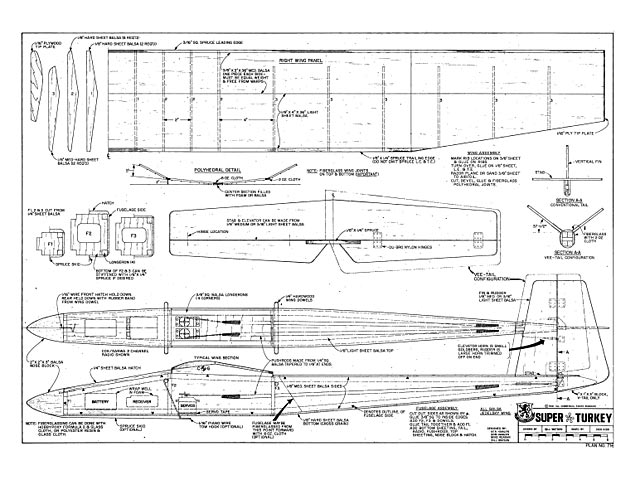 Quote: "If simplicity is a virtue, you're going to have the most virtuous R/C aircraft on the field with this six foot span, all-balsa, Jedelsky wing sailplane for two-channel operation. Super Turkey by Joel Rieman.

In this world of computer designed model airplanes, simplicity is a virtue. Too many model glider enthusiasts are becoming concerned with Reynolds numbers and formulas, Their intentions are to design a super ship that will fly fastest on the slope or break a distance record in the desert. While competition and being top-seated are all well and good, and very American, I can also be nerve racking and expensive. So, while your Grand Esprit (oz9015) is still in one piece, set it aside and consider the advantages of having a model like the Super Turkey.

To begin with, the all-sheet construction and Jedelsky style wing make for easy and fast building. In fact, the model can easily be built in one full day. Financially speaking, $25.00 to $30.00 is all that is needed to buy the necessary materials - tools excluded, of course. When completed, you have a hands-off airplane, its stable nature and good maneuverability make it an ideal trainer, although it is in no way limited to beginners. All told, the Super Turkey is a simple, inexpensive, good flying sport model which, if demolished on the face of a slope, would be a relatively minor loss, assuming there is no radio damage.

It has taken approximately five years for the Super Turkey to reach its present state. Actually, the design combines the best ideas of four glider flyers, all of whom had been experimenting with all-sheet, Jedelsky winged flying machines. One of the four flyers was Bill Watson who added the final touches, drew the plan and supplied the needed information for preparing this article. It was Bill who tried the first V-tail on the Super Turkey, Although it looked sporty, it required a little more attention than the conventional tail version and was also more difficult to rig.

I first came in contact with the Super Turkey about four years ago, after watching Bill Watson, a superb pilot, perform incredible stunts with his model. Impressed, I built one, installed a used EK brick and set forth to fly my wood grain bird (it matched my radio). It had been a wise choice for my first RC glider. By the time l had mastered slope landings, I had inflicted several wounds, allot which could be repaired with a band-aid and some five-minute epoxy. Even a folded wing, the result of an attempted Hi-Start launch with 1.4 in surgical tubing, was not too serious for this remedy. That wing had not been glassed.

My model was a bit on the heavy side, but 90% of the flying I did with it was on the slope. The Super Turkey, while well suited as a slope glider, was originally designed for thermal flying. If most of your flying will be of this type then build light, adding ballast for the slope or windy conditions. Use the recommended flying weight of 26 to 38 ounces as a guide in building your Super Turkey.

Construction. Wings: The wing plan illustrates the simplicity and ease of constructing a wing Jedelsky fashion - two planks with ribbing. This type of wing has been used successfully in the past on free-flight power ships, Nordics, and RC gliders. Its hard to beat for low cost sport models.

The wing shown spans 72 in - two lengths of 3 ft balsa - and has an area of 500 square inches. An 8 ft wing can be built in the same manner if 4 ft stock is available. In either case, you will need two sheets each of 3/8 x 3 in medium hard balsa and 1/8 x 4 in light stock of the length you choose. Make sure when choosing this wood, that it is unwarped and that the opposed sheets are of equal weight.

Begin building the wing by tapering the 1/8 sheets as shown on the plan. This will automatically provide washout when the tips are raised. Now cut 8 long ribs from 1/8 hard sheet and 12 short ribs from 1/8 medium hard sheet. Using a ball point or felt tip pen, mark rib locations on both of the 3/8 sheets of wood and then glue the ribs in place using Tightbond or a similar adhesive..." 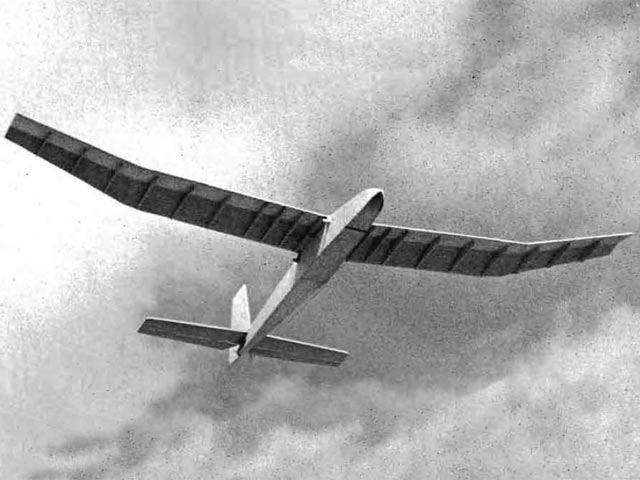 First, I love Outerzone. Thanks so much for all you do. We built a bunch of Super Turkeys in the late '70s, but substituted foam-core sheet for all the balsa, and used them for indestructible slopers. A fantastic and surprisingly airworthy (and crashworthy) design. Super cheap to build in foam core, and when it won't fly anymore you throw it out and make another! All the best,
PeterDudley - 11/07/2016
In the late '70s this was the first scratch built plane I ever built. When I say scratch built, I mean I had only the RCM magazine with the plan on one page. I measured all the parts and drew it on a piece of paper and built it from that. I put a Cox .049 in the nose and basically learned how to fly with it. It was easy to fly for a beginner. I had forgotten about it until I saw it on Outerzone. This is a great website for us scratch builders. Thanks for all you do.
BillJenkins - 15/07/2016
Hello, and thanks for all the beautiful plans. I have built my Super Turkey in the early '80s from RCM magazine plans, enlarging them by hand and cutting all the pieces. I was 15 or 16 at the time. I flew it many times with a Cox .046 on the nose. Now I've seen the plans on Outerzone, I've retrieved the plane in my father's home attic and restored it. I left the old Futaba servos but did them a proper maintenance. I repaired and reinforced everything and changed the control lines. I put a modern outrunner on the nose, even if I planned to fly it from slope. I'm sending you a couple of photos from the 'maiden' day [more pics 003, 004]. It flew beautifully after 30 years! My heart was beating fast. Used to the modern fiber and foam ships, the feel of the flying wood is kind of a thrill. I'd be happy if you'd put the photos on your site. Thanks for the plans that triggered my restoration and that made me able to rebuild the damaged parts.
RaffaelloBisso - 09/08/2016
Built mine in 1996 or so, flew it at a slope near Quebec City (Quebec, Canada) the following year. Despite a few moves and more models, I keep coming back to it, such as during an expedition in Lawrencetown Beach (Nova Scotia) in August 2015 [more pics 005]. It's been my best investment in balsa wood!
JacquesDesBecquets - 10/10/2016
I built one when I was 14. the Super Turkey had made the happiness of all our club. We had built more than 6 of them in Saint-Bruno, Québec ! With the bungee cord it was a pleasure to spend days flying them. I think I'll do one again with my son :-)
Robert - 10/10/2020
Add a comment