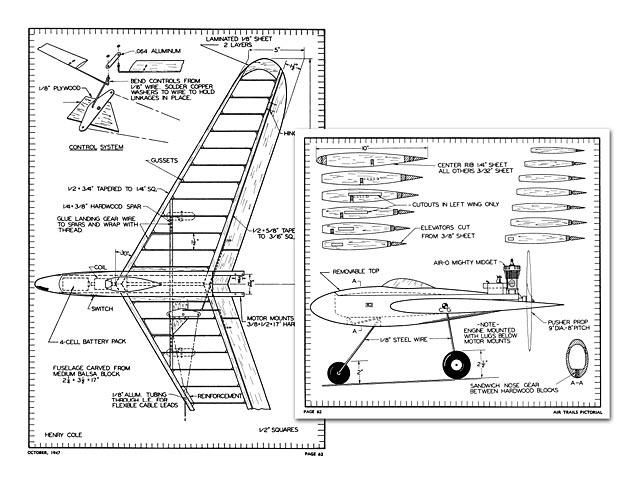 Quote: "TH E general opinion of control-line flying wings is that they are a novelty and cannot compare in performance to conventional types. Most model builders expect the flight pattern - to be erratic, with numerous longitudinal oscillations. Nothing could be further from the truth. A correctly designed flying wing is easy to fly and is exceptionally stable in the air. In fact, the design shown here is recommended for beginners because it is almost impossible to ground loop, and takes off and lands almost by itself.

The story of the development of this design began aboard an aircraft carrier during the Pacific war. Balsa was hacked from a discarded life raft on Samar in the Philippines, and the job was built in spare time between operations in the Philippines and around Japan. The main problem in the design was deciding between the tractor and pusher arrangement. In favor of the tractor was the simplicity of controls and the ease of keeping the weight forward, in favor of the pusher was elimination of prop wash over the wing and the placement of the motor away from the receiving end of the model.

The deciding factor between the two was the fact that the sweepback necessary in the pusher design to bring the CG forward of the CL, a requirement of stability - added to the longitudinal stability, the main bugaboo in control-line flying wings.

The powerful Air-o Mighty Midget was selected for a powerplant because it has rings and is less sensitive to overheating on the ground. Most motors tend to overheat on the ground as puchers and so the job should be launched as soon as possible after the motor is started..." 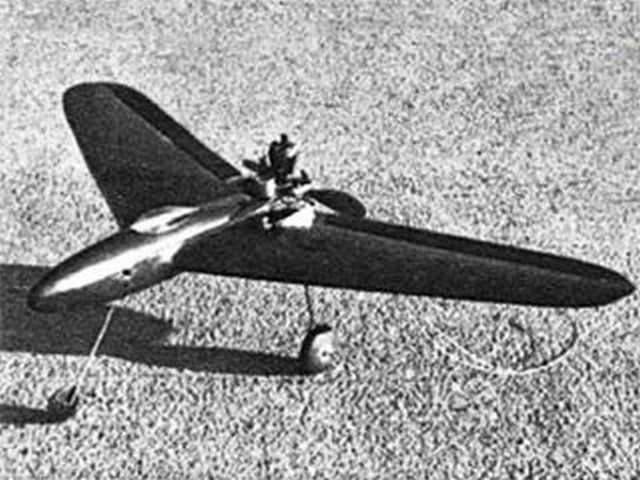