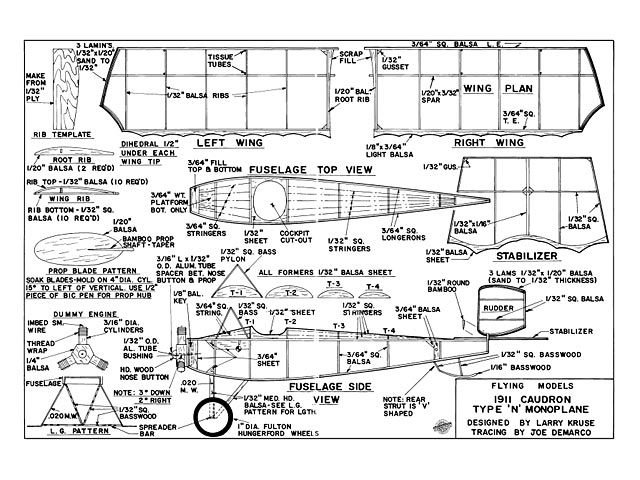 Quote: "Captivated by the simple elegance of this vintage plane, the author presents a simplified Peanut replica. 1911 Caudron Type N, by Larry Kruse.

Bill Hannan has the unique knack of putting together irresistible little modeling vignettes dedicated to the world of smaller models. His latest Peanuts and Pistachios booklets are literally treasure troves of inspiration for all. Volumes I and II of the P and P series have terrific photos of models, numerous 'build-off-of-plans', and several excellent 3-views in Vol.II of rarely modeled subjects; one of them immediately caught my fancy. The 3-view of the 1911 Caudron Type N Monoplane, done so very well by Harry Robinson, just had to be built in Peanut Scale. Incidentally, the Peanuts and Pistachios volumes are available from WC Hannan Graphics, Box A, Escondido, CA 92025 for $4.95 each, plus $1.50 postage and handling.

Because the intended subject was to be a Peanut with a very short nose moment, I simplified several areas in consideration of weight, namely the 'overlaid' airfoil, the rigging aft of the CG, and the basic airframe structure. (Translation: the scale outline remains that of the 3-view, but almost everything else has been sacrificed to keep the weight down.) Nonetheless, the plane still looks like the 1911 Caudron Type N, and flies very well.

Construction notes: Light wood selection is of paramount im-portance in building this plane, perhaps even more so than with many other designs, if that's possible, because of two things: the relatively small wing area and the previously mentioned short nose. An overtly tail-heavy condition in this plane will require an unacceptable amount of weight up front. That weight, in turn, will create an excessively high wing loading which will severely limit flight performance.

The above sermonette was courtesy of long years of building too hefty Peanuts and a very good article by Les Garber in the October '87 issue of Model Builder entitled appropriately enough, Making Your Peanuts Lighter. I would highly recommend it as required reading for any modeler. It's caused me to modify several of the ways I had been doing things.

Start building your Caudron by building two fuselage sides, one on top the other, separated by Saran wrap or a similar kitchen wrap. Form up the basic fuselage box with the indicated crosspieces, starting with those at former stations T-1 and T-2 (top and bottom). Pull the tail together and taper both tailposts on the inside so when the two are glued together their total thickness is 3/64 inch. Moisten the top and bottom longerons from station T-1 forward to allow the fuselage sides to curve to meet the nose cross-pieces.

When the basic fuselage structure is complete, add the superstructure formers T-1 through T-4. To give the cockpit interior a little character, I colored T-1 and T-2 with a brown Magic Marker to simulate a dark wood surface prior to covering the area with light 1/32 inch sheet balsa. Dampening the top of the 1/32 inch sheet will assist it in conforming to the curvature of the formers. Carefully cut out the cockpit opening after the sheet-ing dries. Stringers, fore and aft, complete the fuselage proper. Note that the stringers in front of T-1 are 3/64 inch square while those from T-2 to the tail are 1/32 inch square, the lighter the better. The landing gear can now be installed using the 3/64 inch laminate mount shown. Do not add the 1/32 inch landing gear fairings until after the fuselage is covered.

The tail surfaces are 1/32 inch square and 1/32 inch sheet as required. The top and bot-tom of the rudder are three laminations of 1/32 inch square pinned around a cardboard form. For ease of handling, I started with strips of 1/32 x 1/20 inch balsa and then sanded them to correct thickness after the glue dried. The rudder mount is a 1/16 inch square piece of bamboo rounded to 1/32 inch diameter and pointed on one end. Such an arrangement allows for easy flight trimming adjustment. The bamboo merely pokes down through the stabilizer center and can be tack glued in any position and moved in small increments as required.

Laminate the wing tips as shown, again using cardboard forms. The wings are built by laying out the 3/64 inch square leading and trailing edges and installing the 1/32 inch square rib bottoms..." 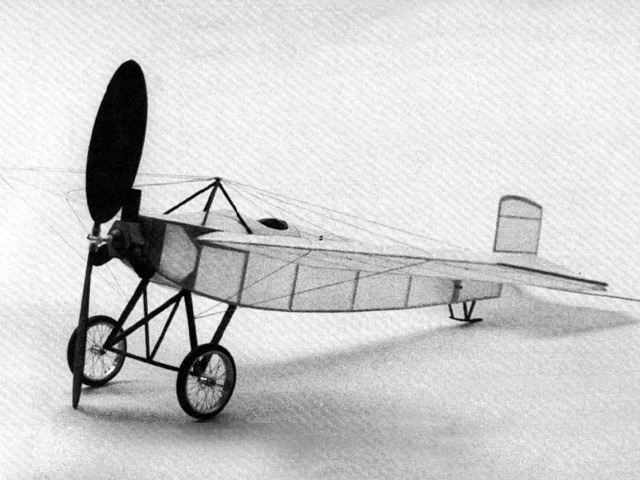