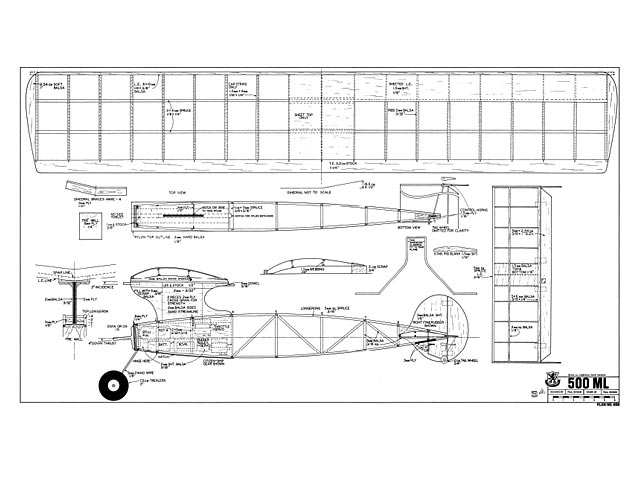 Quote: "Back in July 1940, a sport type plane appeared in the Air Trails Magazine that was so small that it didn't even meet the weight requirements based on engine displacement according to the 'new Academy rules', therefore, it couldn't be entered in competition.

The plane, the Half Pint (oz197) was: 'So small it could be carried to the flying site in a shopping bag, so the aeromodelist would be spared much embarrassment and explanation on the way to the field. Jeers from the neighborhood kids, truck drivers, and dogs, will cease when you tuck your Half Pint under your arm and set out for the field'.

The above is quoted from the article by the designer, the late Lou Garami, who also said he had never seen a 'sporting flyer'. Since Garami didn't design the Half Pint for competition, then perhaps he was our first sport flyer.

In 1971 I designed a plane with a 1/4A engine which I called the Quarter Pint (oz2183). I was not then aware of the above article and plans; I had only a side view of the plane along with the wingspan and length. The Quarter Pint faintly resembled its famous ancestor, but it flew like a dream. It started out to be a single channel R/C but, because of various and sundry difficulties, it would end up being free-flight. It flew through many flying sessions before it was retired. Those wheels sticking way out in front were intended to protect the plane from hard contact with the ground, although they were really never necessary for that. With power off, it floated to the ground in a wide flat circle and many times I caught it without having to move a step from where I originally launched it.

Recently, when we lost our field and moved to the nearby San Diego Charger football stadium for our sport flying, I wanted a plane that could use the light poles to advantage rather than flying above them like everyone else did. I wanted something that would take-off short, land even shorter and turn on a dime. I wanted to play ring-around-Rosie with the light poles, which is similar to pylon racing, I am told.

Why not scale up the Quarter Pint and put in a 3 channel radio, have a highly under-cambered wing so it would fly backwards in a gentle breeze, and could be taken to the field, in a 'shopping bag' which has more carrying capacity than some of our compact cars?

Why 500 ML? Well, as you know, the metric system is on its way and, to introduce you to millimeters, centimeters and cubic centimeters, all the dimensions on the plans are metric. Have no fear, the English equivalents are just below. There are no exact equivalents for the dimension in which balsa wood comes without going to decimals so these are just eyeball equivalents. I don't want you science students writing in bother-ing our Editor telling him that 1/16 in isn't exactly 1.5mm - I know, I teach Chemistry. Originally, the Quarter Pint was almost called the .125 Liters which is 1/4 of a pint. Since the new plane is about twice the size of the original Half Pint that would make it a full pint and that brings a lot of things to mind, but they aren't met-ric, so 1 pint is equal to .5 liters which is 500 milliliters or 500 ML. Confused?

In building the fuselage, it saves time if you cut the two 3/32 sides to shape and build the frame around them. It will be confusing if I use metric in the text, so all measurements here will be English. To build your left and right side, pin the sheet to your building board and build around it with 3/16 spruce longerons and 3/16 square balsa for the cross members. To make the other side, shim up the 3/32 sheet with 3/32 scrap and build around it the same as the first side. The cross members behind the sheet are 3/32 x 3/16 strips.

Finish the fuselage in your conventional manner but be sure to use 1/2 triangular strips to reinforce the joint between the fuselage and the firewall. Coat the firewall with epoxy for strength and fuel proofing after the landing gear is sewn in. The landing gear wire is bent to fit outside the blind mounting nuts used to attach the motor mount. Drill 1/16 holes in the firewall and lace the landing gear on with fine copper wire and epoxy. This is a good time to get the tank in place. A 4 ounce tank is more than sufficient with a .15 and, if you mount the tank horizontal with the top of the fuselage, there will be room enough under the tank for the battery. I used a 500 mil battery pack and it must be up against the back of the firewall to get her to balance where Mr Garami recommended on the Half Pint - 40% from the trailing edge of the wing. The pylon makes installation of the radio gear through the bottom necessary.

Cover the bottom back to the first cross member with 1/16 ply, then leave the remainder open back to where the side sheeting stops. This will be your compartment access and can be covered later with a 1/16 cross grain ply hatch cover. The stab and elevator are standard, no problems here..." 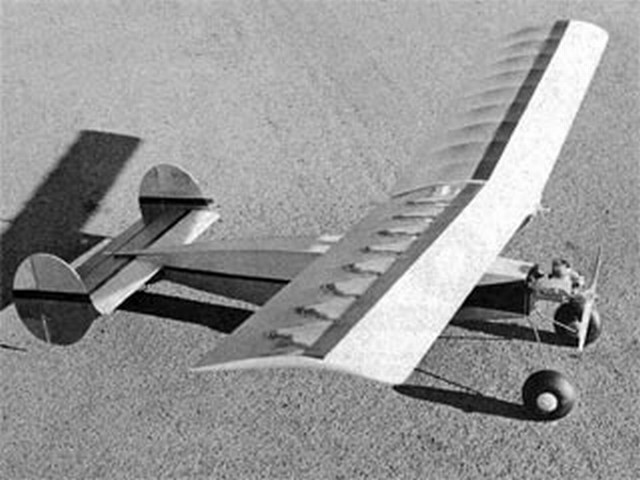