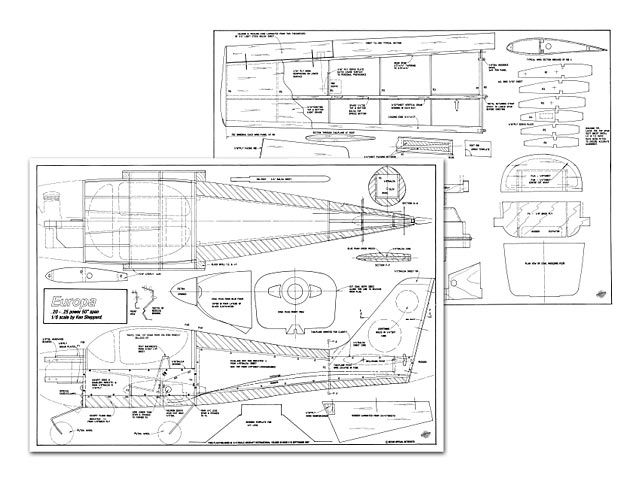 Europa home-builds have been around for several years now, with the mono-wheel and more recently a tricycle U/C versions. Hailed as 'the most significant light plane of the decade', it's innovative constructional methods, using moulded glass-fibre sub assemblies and extensive use of blue foam, closely follows the build techniques of many of our own large models.

I have not seen a Europa modelled before, and the ideal proportions of the flying surfaces, the very pretty lines of the fuselage, and the simplicity of the cockpit interior, do cry out for the R/C treatment. In terms of size, the Editor had suggested a .20 motor would produce a design that would fit onto 16 page format (suitable for a free plan!), so calculations were done to check that the power loading was correct (it was) and that the design would fit (it did!).

Deesign Criteria: Having settled on a span of 50 in to give the chosen wing loading, the next decision to be made was how to fix the wing. On the full-size, the cockpit glazing is so revealing, that a fully fitted-out 'office' would be mandatory, which meant that it would have to be a two piece wing. Study of photos of the full-size showed that a wire wing joiner tube could pass through the cockpit, just behind the seats and would be invisible. The section on the slightly tapering wing plan would completely bury a mini servo, so the well-proven free-flight method of wire joiner, incidence pegs and screwed plate retainer on each wing panel was used, with individual servos for the ailerons.

The cockpit is a one-piece unit, comprising of firewall with nose wheel leg, hardwood bearers and ply shear plates to carry the motor and fuel tank, an intermediate bulkhead carrying the wing joiner tube, and a rear bulkhead carrying the rear u/c legs. Doubler-reinforced balsa sides, and a central tunnel link these three formers (on the full-size, the tunnel carries the mono-wheel and mechanism, on the model it makes a perfect recess for Rx and battery). Ears on each former provide the location of the root wing rib. The bay between the wing joiner and the rear legs being the location of the three fuselage mounted servos. In this configuration, the balance point came out just on the safe side of the CG (slightly nose-heavy), without any additional ballast..." 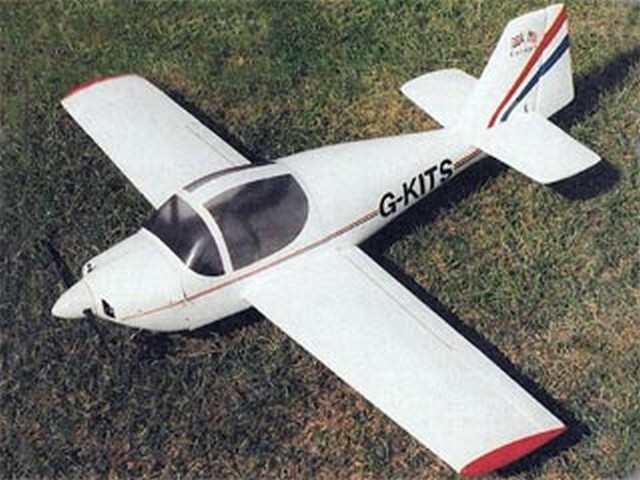