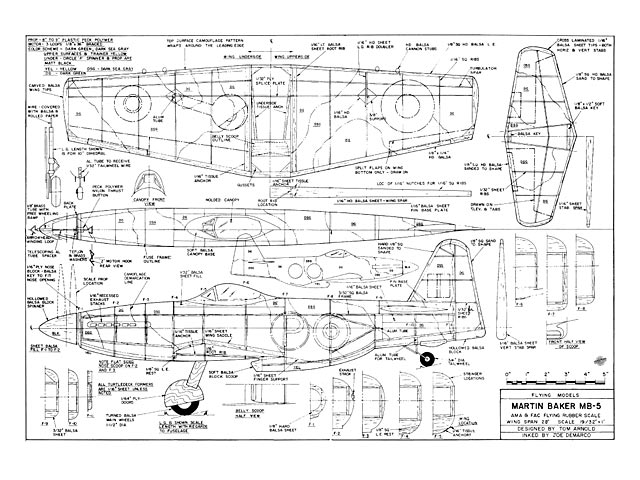 Quote: "A true thoroughbred. Move over, Mustang. Here's a free-flight scale version of what could have been the greatest piston engine fighter ever. Martin Baker MB-5, by Tom Arnold.

It had to be the most undeserved hard luck story of aviation. The fourth of a short line of experimental fighters produced by the tiny English firm of Martin-Baker, the 6-ton prototype won high accolades from all who flew it. Powered by a 2,000 HP Napier Sabre engine turning a counter-rotating propeller, the corpulent fighter was good for 460 mph at 20,000 feet and the controls were so exquisitely harmonized that pilots compared it to the highly esteemed Spitfire.

With almost stubby wings and the long profile of a greyhound it appeared as more of a thoroughbred racer than a fighter. While the pilots praised its maneu-verability, the maintenance inspectors wrote glowing reports of its ease of maintenance and fine engineering. The landing gear system, engine installation, and armament were so well laid out that they were recommended for future aircraft of all manufacture.

Demonstrated and tested by aviation professionals for four years, there were nothing but flowers and compliments for the broad-sided speedster and yet there was only one produced. Sir Jimmy Martin must have had mixed emotions seeing the dramatic success of his brainchild and then watching all interest in this ultimate piston-engined fighter quietly fade away as the infant jet age dawned.

The aircraft itself had one last mo-ment of glory at the 1946 Farnborough Air Show when the famed Polish flyer, Jan Zurakowski, put on a dazzling display of aerobat-ics and then - nothing. The yellow-bottomed aircraft that was described by one pilot as a 'cross between a Mustang and a V-2' simply disappeared in history. No records exist where it went and no one has ever claimed to have seen it. It came and went without even a name to recall it by, just a cryptic designation: the MB-5.

While the MB-5 made no great splash on the aviation world, as a rubber scale subject it is delightful. One look at the long nose, large horizontal stabilizer, and broad wings makes one think that perhaps Sir Jimmy Martin had a bit of stick and tissue time under his belt before he designed the MB-5. Countering the advantages is the deep fuselage and short wings which just about eliminate what little excess stability the aircraft has. Fortunately, a forward CG and generous dihedral give a manageable subject. Eliminate those at your own risk. While the MB-5 flies smoothly and well, the parameters of its trim are pretty rigid. More on that later.

The outline is true to scale with the only deviations being airfoil, dihedral, and of course, propeller. The author is assuming that the builder has a few rubber scale models behind him and that he is looking for a sleek subject to give some competition to his cohorts at the fun flys and contests. Let's get started.

Wings. The MB-5 uses the 'cracked rib' construction, mostly because the author hates cutting out different wing ribs. At the Reynolds numbers our model will fly, the flat sections supply a needed turbulator effect and the air-foil section is constant and true the length of the wing..." 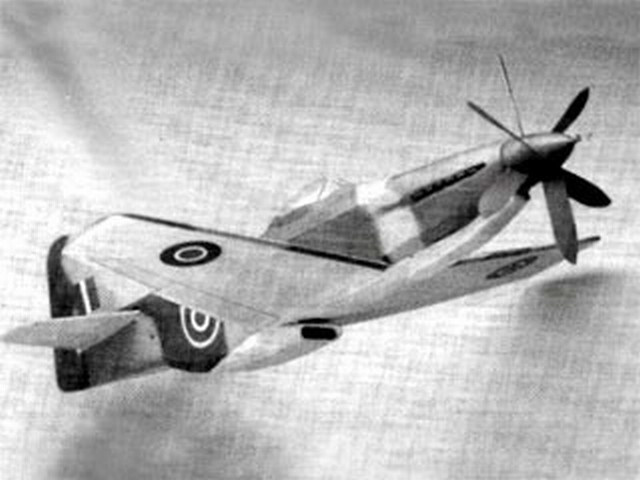 Give this more dihedral than is noted on the plan.....the most you can stand! Otherwise it is a very calm weather airplane.
Tom Arnold - 11/06/2019
Add a comment