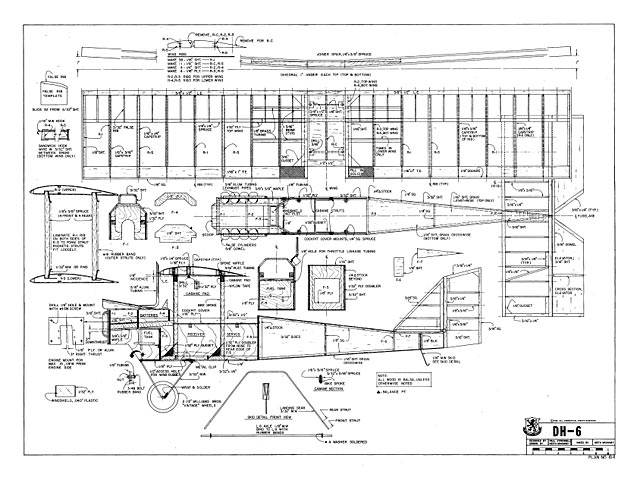 Before any of you scale purists begin writing in to complain about the scale fidelity of this particular model please let me explain its orgins. Its real genesis was as one of Walt Mooney's very fine peanut scale rubber models. Being a fan of Walt's articles on peanuts, I was really intrigued with the DH-6 (oz10693) when it appeared and noted that its fine lines, all straight, would make a nice RC job.

After noodling it for awhile, I settled on a 3x magnification, or Brazil nut scale, which made for a nice .15 size airplane and also matched a set of wing rib templates I already had on hand. It was only after I had drawn plans and begun construction that I discovered that Walt had made some extensive changes to adapt the airplane to rubber power. What evolved is a very, very semi-scale DH-6, but one helluva good scale (3in = 1ft) model of a peanut scale rubber powered airplane!

Aside from the fact that it is not exact scale, you must admit it makes a very interesting scale type airplane. The flying characteristics are excellent with no tendency to ground loop on take-off and a slow, stable flight. If you're an expert looking for a change of pace or a novice with hankering for something different yet easy to fly, grab some balsa and have at it.

Construction. In describing the construction I wil assume all pieces are cut out beforehand and describe just the assembly unless some special cutting instructions are required. Since weight is not a serious problem on this airplane, select your balsa with more of an eye to strength.

Fuselage. Laminate the 1/32 ply doubler to the 3/32 sides using contact cement, then mark the location od the bulkheads, the cabane struts and engine mounts on the inside of each..." 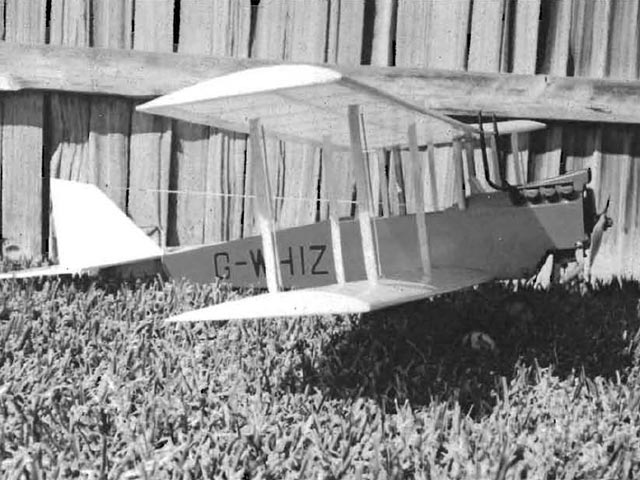