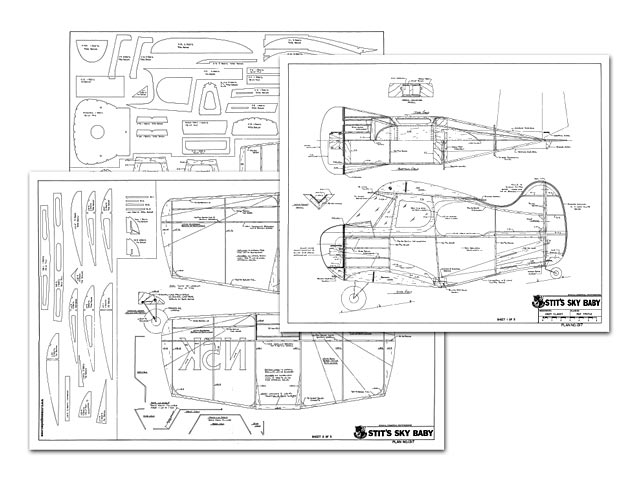 Quote: "Why do I love weird airplanes so much? Maybe it's the rebel in me that admires those who succeed at what 'conventional wisdom' says can't be done. The Stits Sky Baby is more than just an unconventional-looking plane; it was an actual World Record Holder, being the world's smallest man-carrying airplane of its time - a distinction it held for some 30 years.

My love affair with this aircraft began with RCM! Ken Willard's 1986 RCM article and plans for his 1/4 scale version of the Stits Sky Baby (oz6409) went straight to my heart - despite the fact that he had great difficulty getting it to fly. I remember Ken's wry comment that flying his .25 powered Sky Baby was easier than flying a 1/4 midget racer, but harder than a Quickie 500. There were many crashes and rebuilds.

Ken's plans and article were my starting point with the Sky Baby. I first built a 1/8 scale R/C scale model of the Sky Baby powered by an .061 and flew it successfully. But flying it was a real stunt. It left my knees shaking after each flight!

This super lightweight 1/4 Scale Sky Baby design with its lightweight radio gear, efficient batteries, and electric motor enables most any R/C pilot to fly this magnificently rebellious aircraft. You just need to follow my instructions and please, you must promise to tell no-one how easy it is to fly.

Full Size Sky Baby History: Ray Stits told me that he became interested in very small airplanes during some hangar talk in which his buddies said: You can't do it! The result was his first World's Smallest Plane, the Stits Junior. The Stits Junior was a low wing monoplane with a ten foot wingspan and a ten foot length. This success spurred him on to take things another step down in size with the Sky Baby. The Sky Baby had a 7 foot 2 inch wingspan and a length of only 9 feet 10 inches.

The construction of the original Sky Baby began in April of 1951, and took about 13 months to complete. The plane was built as a joint venture between Ray Stirs and Bob Starr. Bob supplied the Continental C-85 engine which was set up as a racing engine and was rated at 112 bhp! Ray mentioned that back then, to promote air racing, Continental would supply a special heavy duty crankshaft to would-be racers for half price - about $100.

It was originally designed to have tricycle landing gear, but problems with the nose gear led to the adoption of a tail wheel. This reduction of weight in the nose and increased weight at the tail caused the plane to be somewhat tail heavy. To prevent the plane from being too tail heavy, only a light pilot could fly it. A pilot of only 140 lbs. would have given a perfect balance.

There are flaps on the top wing and ailerons on the bottom wing. It uses an NACA 2312 airfoil, which is a very stable airfoil that minimizes the problems caused by the plane's slight tail heaviness. This same airfoil was used on the Curtiss P-40.

The plane is so small that the pilot's feet were on either side of the oil sump. An interesting feature of the original Sky Baby was that the outboard wingtips had leading edge slots to delay the stall. The landing approach was made at 80 mph and touchdown was at about 65 mph. Top speed was an indicated 250 mph. I say indicated because the airspeed indicator was never calibrated. Why calibrate it when the pilot is much too busy to ever look at it?

Only two pilots ever flew the Sky Baby. Bob Starr was the original pilot and he made most of the flights. Bob had flown Merlin-Engined P-40's for the Flying Tigers late in WWII, so he had some experience with the airfoil. The other pilot who flew her was Lester Cole. The smallest plane that Lester had flown before the Sky Baby was a clipped wing Cub. Unlike subsequent 'World's Smallest Planes' - which only made short hops in ground effect to set the record and get it in the books, the Sky Baby's flight characteristics were good enough for it to log ten flight hours..." 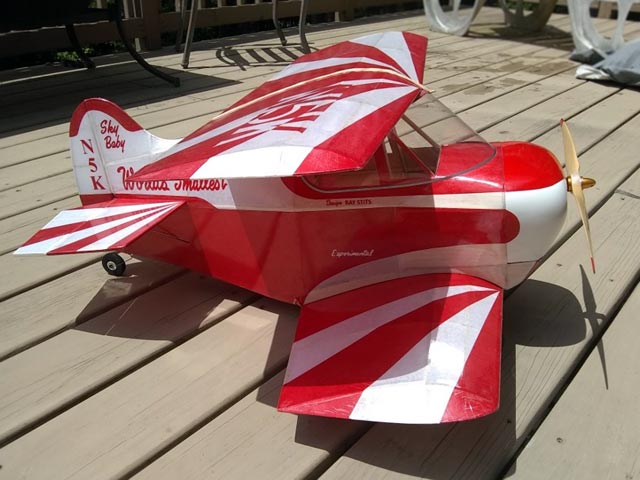 Hi Mary, Attached are a couple of pics of my Clancy Stits Sky Baby from Outerzone plans [main pic, 004]. Covering is Easy Built Lite Tissue with Doculam over the top. Came in at 30oz with a 1300 3s battery. With the Hobbyking motor I had in the parts box and a 13x6 prop to clear he cowl I have 150w per lb, so half throttle max I think if I don’t want to tear it apart. A lot of fun to build and I’m sure to be the only 30oz ¼ scale at the club this weekend!
John G - 11/05/2021
Add a comment