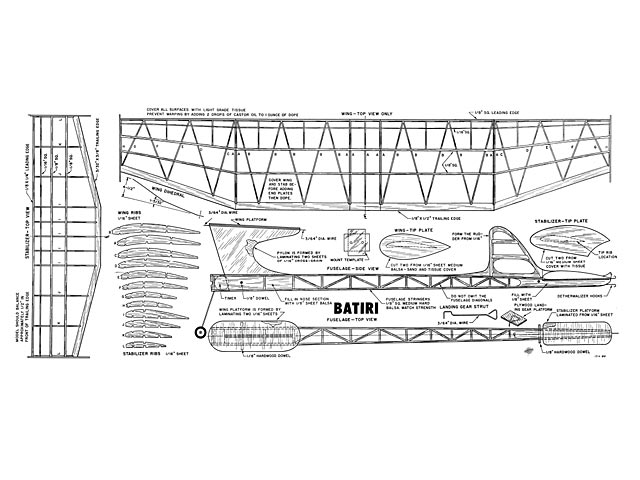 Mexican model by J Manuel Tellez. Thanks to Pit for confirmation on this one.

When I first seriously considered designing a F/F model that would stand a chance in a large US contest, I came to the conclusion that it would need a skyrocket climb and a slow soaring glide. As we all know, these characteristics are based on contradictory design principles. Every model designer is torn between the two, trying to reach a satisfactory compromise. I began to wonder if there was a way of changing either principle from the usual standards without sacrificing one or the other. After some thought I believe I succeeded in changing both and in incorporating these changes in Batiri.

My first aim was to gain maximum altitude during the powered part of the flight. This depended on two factors, the flight path and the speed. The model would gain the most altitude by traveling along a completely vertical flight path at the greatest possible velocity. I first concentrated on obtaining the maximum possible vertical speed and soon realized that it depended mainly on a relationship between power and weight. This can be more clearly understood by studying several mathematical formulas involving power, and starting with the one which defines it: P = (W x H)/T, where: W = weight in pounds; H = T height in feet; T = time in minutes.

Since vertical speed is equal to vertical distance or height divided by time, the formula becomes..." 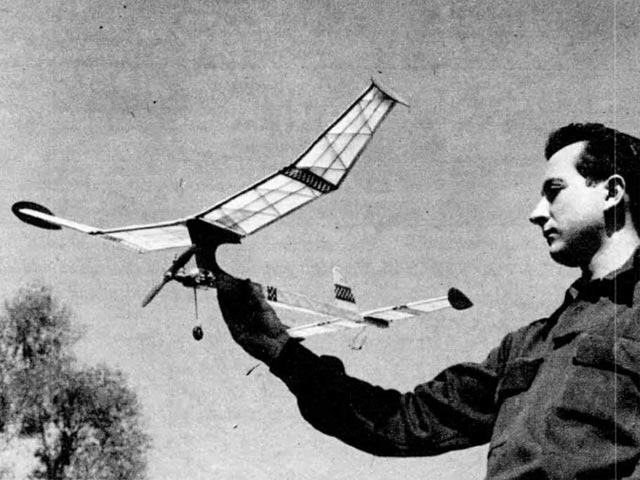 Hi Steve. Batiri was designed by J. Manuel Tellez of Mexico. There is some info on the Volar Libremente site but the article appears to be in Spanish: aeromodelismovolarlibremente.blogspot.co.uk
BobP - 25/06/2016
Add a comment