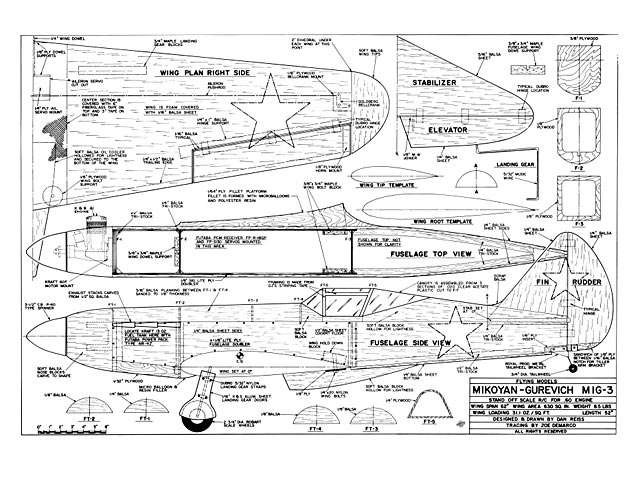 Quote: "An early product of the famous Mikoyan/Gurevich team, this plane's sleek design makes it an appealing R/C subject. MiG-3, by Dan Reiss.

The MiG-1 was the initial product derived from the collaboration of the Soviet aircraft designers A Milkoyan and M Gurevich. It first flew in 1940 and used a mixed bag of materials, wood and metal, for construction. Unfortunately, its handling characteristics left quite a bit to be desired and it was soon supplanted with the improved MiG-3 in 1941.

The MiG-3 had a more powerful engine, new propeller, additional tankage and an increase in dihedral. The canopy was changed from an open version to a sliding one, with the portion of the fuselage just aft of the cockpit removed and glazed over to improve visibility. The oil cooler was enlarged and moved forward. Other than these changes, the two aircraft were basically similar in their outward appearance.

The MiG-3 was a much better flyer and was relatively fast for the period; about 400 miles per hour at altitude, But it also like its predecessor, suffered from poor maneuverability and both were outclassed by the opposing Luftwaffe fighters. Other, more superior Soviet fighters soon replaced the MiG-3's front line duties and it was relegated to less important roles such as high speed reconnaissance before being totally withdrawn from combat. In total, about 2,100 MiG-1's and -3's were built.

The Mikoyan Gurevich design team continued on through the war and is still in existence to this day. That design bureau is responsible for fighters such as the infamous MiG-15. used extensively in Korea, the MiG-25 Foxbat used by a Soviet pilot, to defect to the west in 1976 when he flew it to Japan, the swing wing MiG-27 Flogger and the MiG-31 Foxhound, their latest design. But these modern day fighters are not the subject of this article. It is the MiG-3. Ideally proportioned for a radio controlled model, you'll surely attract attention and admiration at the field when you show up with this most striking model.

Putting it together: Start with the wing. Cut out the foam cores using the supplied templates. Glue on the 1/4 x 1/2 inch balsa trailing edge. Carve and sand it to shape. Use some masking tape over the foam to protect it while you are shaping the balsa. Cut, out the recess for the 1/4 x 1 inch balsa hinge support and cement the support in place. Make sure it is level with the top surface of the wing% install the aileron bellcrank at the wing tip as shown on the plans. Make the aileron pushrod from fi-berglass arrow shafts and put them in place.

Sheet the wing with 1/16 balsa. Cut a small slot in the wing skin at the bellcrank where the pushrod to the aileron will protrude. Temporarily locate the aileron control horn in position and bend up a Du-Bro Kwik Link and rod with a Z- bend in it..." 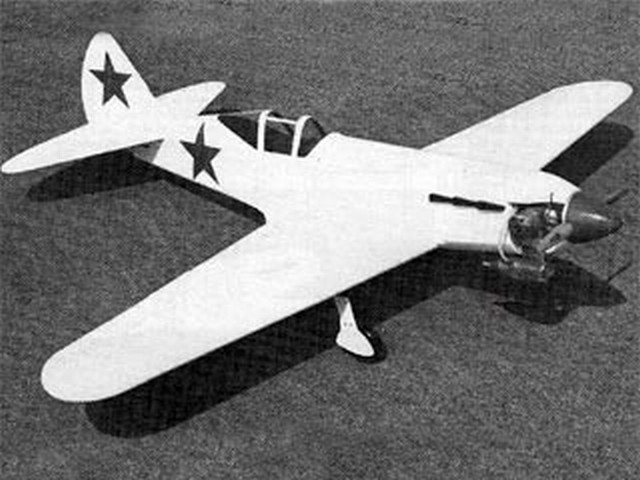