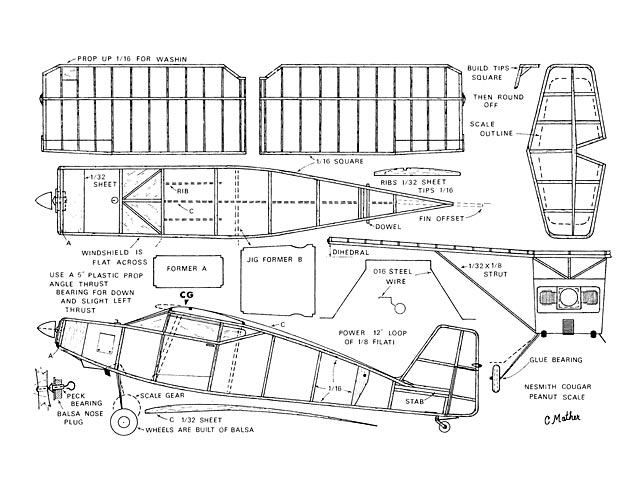 Quote: "This is a model of a two-place, high performance, homebuilt airplane that was designed and built by Robert Nesmith of Houston, Tex. Many copies have been made from his plan, and many of those include variations of the original.

I selected it as a model when my son Kim wanted to build a scale model. That was several years ago, when he was a Junior of limited construction skills. The Cougar has simple box construction and excellent proportions for free flying. Kim's model was rough in appearance, but flew well. In competition, the model won the 1970 Nationals and Flightmasters Junior Peanut Scale events. A neighbor youth, John Nowak, built one and won the 1971 Flight-masters Junior Peanut Scale event.

Many others have been built and fly well. I finally got around to building a Cougar two years ago, and it climaxed its career with a nine-minute flight at a San Diego Orbiteers' contest. The Flying Aces Club of Bridgeport, Conn issued an 'official' world's record Peanut Scale flight certificate for that. The Flying Aces, led by Dave Stott, are responsible for the Peanut Scale concept. And Dave is able to enlist the support of well-known persons, since the certificate is signed by Martha Mitchell!

The plan drawn for Kim had almost no details, but some are shown here for the modeler wishing to add them. A highly detailed drawing of the airplane appeared in the February, 1959, American Modeler.

Peck Polymers (Bob and Sandy Peck) are producing a first rate kit of the model. It is great for the modeler who wants all of the materials and special fittings in one package. They put much time and effort into obtaining high-quality materials and items suitable for this size model and I highly recommend the kit.

This article is aimed at helping modelers who are inexperienced at building and flying small scale models. The small strips of balsa can be purchased or cut from sheet. A metal straightedge makes an excellent guide for stripping sheet wood. Place the wood on a hard, smooth surface such as glass or tempered Masonite. Use medium-grade balsa. If graded, the 8 lb (per cu ft) stock is about right. Soft balsa may be lighter, but is more likely to warp.

The wood sizes shown produce a strong model on which the tissue can be shrunk and doped. The cross members of the fuselage and tail surfaces could be reduced to 1/32 x 1/16 if you care to work with wood that small. The longer-ons and flying surface outlines could be reduced to .050 in square and still with-stand light doping. Some modelers use much smaller wood sizes and leave the covering loose.

The various parts are assembled and glued over the plan, and held in position with pins. A sheet of soft 'wallboard, such as Cellotex, is an excellent work surface, since pins can be pushed in easily. Cover the plan with Saran Wrap, or similar material, to protect it from glue. Some parts of small models are difficult to manipulate with the fingers, so try bent-nose tweezers. At first, the spring action of tweezers requires a large force, making it difficult to feel the wood part; so grind or file away much of the metal near the upper end.

Almost any glue will do the job on a model such as this one. I recommend squeezing some Duco or Ambroid plastic glue into a bottle and adding 25% lacquer thinner. Apply this to the parts of a joint with a small brush or stick. The thinned glue soaks into the wood better, but requires a double coat. That is, coat each part of a joint, then wait a minute or so before applying a second coat and putting the parts together. White glues can be used, but take longer to set. They are less likely to warp a light frame, so would be good for the flying surfaces (thin these glues, also).

The two fuselage sides are assembled over the plan. Some modelers do both at once to produce identical frames. Due to glue flowing, the frames will stick together. They can be separated by carefully sliding a razor blade between them. Pre-bend the longerons so that they will hold the curve without forcing..." 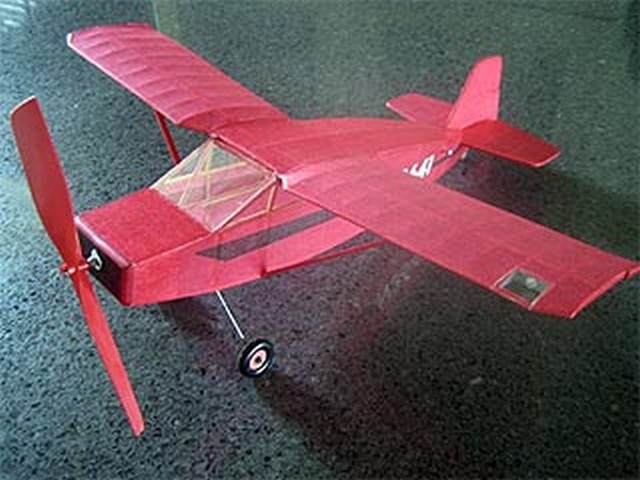