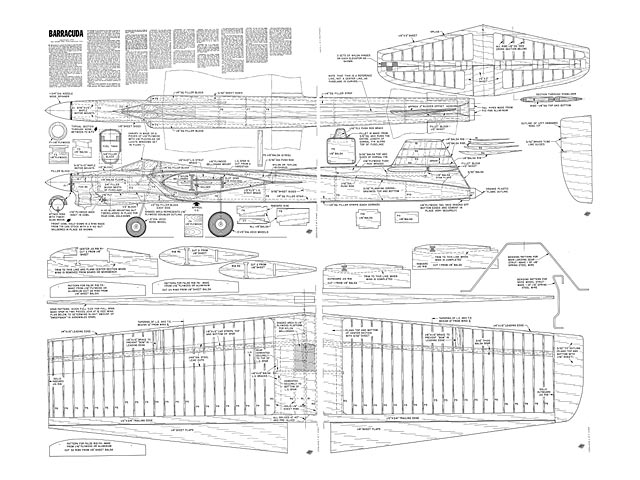 Barracuda is a control line design to meet the needs of the stunt flier who needs every appearance point he can muster up plus a contest ship that practically flies by itself. And you sport fliers will find this one different enough to enjoy building and as rugged as any you will come across for plain fun flying.

Barracuda evolved from 30 months of experimentation which began with a plane called the 'Cirrus.' That very sleek job with extremely long slender lines had an ill-fated existence for its first year and a half. Since I usually build a fairly heavy stunter I started with a 15% airfoil and 600 square inches of wing area. So this turned out to be one of my lightest stunt ships weighing in at 42 ounces! Consequently, with not much weight and all that wing area the wind blew it all over the sky.

Among the other things that happened to Cirrus: Its transparent canopy was replaced by a balsa block due to a stress crack that kept cracking the plastic ones as fast as I could put them on. Its landing gear was too softly torsioned in the wing which resulted in bouncey landings so it was shifted to the fuselage to provide good landing characteristics - instead the change eliminated a slight bobble in the square corners. I put the landing gear in the fuselage too far forward of the center of gravity so I eventually substituted a tricycle gear which gave a guaranteed landing every time. The reason I am bringing out all these factors about the original Cirrus is to emphasize that you should never give up on a stunt ship and put it aside after one week of flying. If I had felt that way the Cirrus would not still be flying.

After all this battling with the original design I began to see some excellent characteristics shining through (incidentally, she weighed 58 ounces after all those changes and a re-finish job). I felt her general dimensions were worth following through in a new ship. Thus, Barracuda came into focus. I decided to develop a stunter that would resemble a jet with Cirrus' performance.

First contest for Barracuda was the 1962 Nationals at Glenview, Illinois. I was overwhelmed by the attention and favorable comments given this ship. To top it off she was awarded top appearance points in the Open class. All flights to date have left me with the impression that through any maneuver she flies at one speed (approximately 55 or 60 miles per hour) whether going up or down and regardless whether the weather is windy or calm. You will find that Barracuda flies right in the groove or any place you desire. When you give her up or down no matter how abrupt or violent she turns smoothly with no tendency to mush or sink or lose flying speed. This is due in part to an extremely wide fuselage which is helping smooth out or cushion the turns.

Also contributing to good flight characteristics is the extreme taper wing which starts with a 20% airfoil at the root and runs to 9% at the tip..."

Article pages, text and pics, thanks to Pit. Further construction details are printed on sheet 1 of the plan. 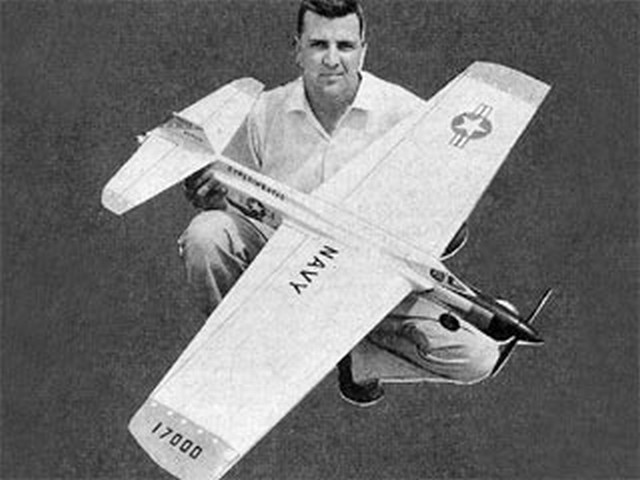