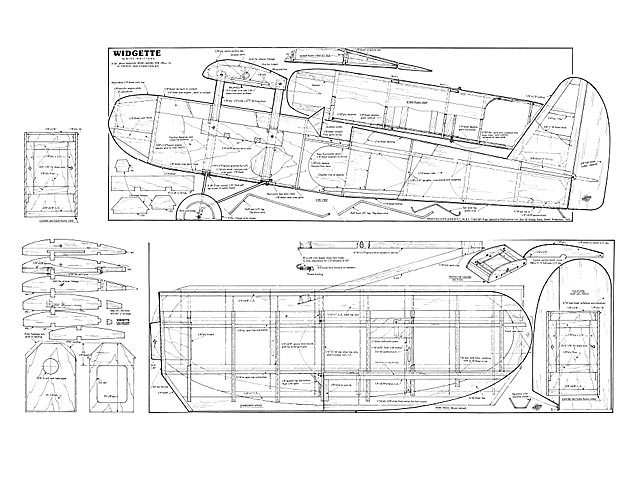 Quote: "Your full size pull out plan is for Mike Whittard's sem scale charmer, for .15 to .20 engines and 4 function radio.

WIDGETTE ORIGINALLY STARTED some three or four years ago, and with three objects in mind. It had to be suitable for three or four function operations, it had to be simple to build, and lastly, it had to use no material over 24 in long - this because the original request came from a kit manufacturer. The original machine was duly built, and after some engine problems, proved to be a reasonable flyer - certainly it fulfilled the requirements admirably. At this stage the prospect of it becoming a kit faded, and the engine problems returned, resulting in the severe damage and eventual scrapping of the model.

Last year, when casting around for a sports design that resembled a full-size aeroplane, the original 'Widgette' plan was unearthed. At this time it bore no name and was merely referred to as the 'Parasol'. The original plan was heavily modified to increase wing area, improve its looks and stability, and to provide better crash-resistance - not that I intend to crash models, but I do have accidents from time to time. The final result is presented here as the 'Widgette' - partly due to my earlier association with the Westland Widgeon, and partly due to the model's slight resemblance to that machine in some features.

The fuselage construction is a little different to most models, but is easy to build and immensely strong. Start by cutting out to 1/16 sheet balsa sides for the front fuselage. This is the bit from the rear of the cockpit to the 1/4 in ply former F1. Mark the positions of the cabane struts on the inside faces. Cut the cabane struts from 1/8 ply. Make sure that it is 1/8 ply (or 3mm) and not 5/32 in otherwise you will have to bring it back to size later. Now cut out the 1/8 balsa doublers, the front and middle ones (with reference to the struts) with the grain vertical, the rear with the grain horizontal.

Glue these in place and ensure that the structures can lie in grooves forward between the doublers. Note that the front doubler stops short of the outer skin to provide a position location for F1, and that the rear doubler extends well beyond the rear of the outer stern. The 1/32 ply inner skin is now added; you will note that the struts now slide in a vertical socket formed between inner and outer skins, and the balsa doublers. Add the 1/16in. ply F7 pieces which will locate the servo rails and provide additional stiffening for the cabane strut bolts. Join these two sides with Fl and F3, then add the two F2 formers and undercarriage blocks.

The rear fuselage is built up on two light frames which are constructed on the plan in the normal way. These can then be joined over the plan view by pinning in place upside down. When dry, the front and rear fuselage sections can be trimmed and joined. The best way to do this is to position the plan so that F3 is just clear of the building board and front and rear sections can then be aligned over the drawing - upside down - for joining, the plan enables you to ensure alignment in the plan view, and the board ensures alignment in the side view. It is necessary to trim the longerons to fit between the skins, but once glued up, results in a strong enough joint for the rest of the operation. The reason for the rearward extension to the rear 1/8in. doubler now becomes apparent, as these components now protrude through the outer faces of the longerons, and should be planed and sanded to conform to the rear fuselage taper.

Now add the rear fuselage 1/16 balsa skins, followed by the rear decking formers, skins, etc. The front fuselage top decking can now be added. Before planing and sanding to shape, make the slots for the cabane struts by passing a long series 1/8 in drill, or even a sharpened piece of 10swg wire, up through the sockets in the fuselage. Lower cowl and bearers can now be added..."

Article pages, text & pics. Note the article says '40inch span', but the actual span is 53in. 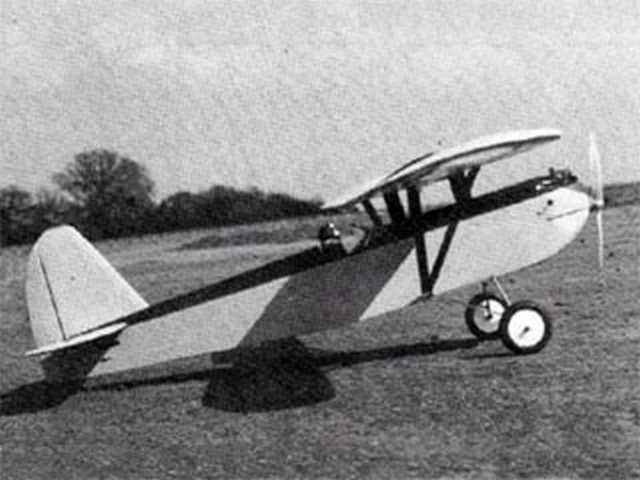