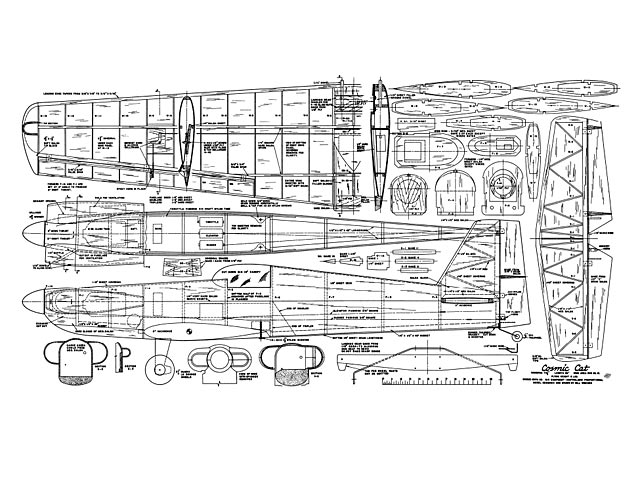 Quote: "Next year will climax the trend to more realistic R/C models. This semi-scale beauty combines a Goodyear's exciting looks with an aerobatic performance good enough to win contests. Why not make your 1967 ship a crowd stopper?

If you think that the Cosmic Cat looks like a Goodyear racer, you're right; that's exactly what I had in mind when I built it. While the model Goodyear event was producing scale and semi-scale models that looked like the real thing in the air (though flying charactenstics often left much to be desired), the majority of our stunt ships were going in the opposite direction. With square fuselages and the cylinder sticking up in the breeze, any attempt to resemble a full-size aircraft was doomed to failure.

I built a Cosmic Wind (original version with a turtle deck, looked like a Long Midget) for pylon racing and it was a total flop. Like many scale ships, the tail moment was too short, with the attendant problems. The CG was hyper-critical, and aside from the fact that it stalled when it was going 80 mph (a situation not improved by its 6-1/2 lb weight) it was still wonderful to watch in flight - after I got it going faster than the stalling speed.

Hence, when 1 started to build my next stunt ship, I was determined to build a model that looked like an airplane. The Goodyear style affords advantages over other configurations. You can hide the engine in a cheek cowl (made to order for an opposed twin) and the full-size design was capable of aerobatics. Some changes are needed from scale dimensions to provide good characteristics..." 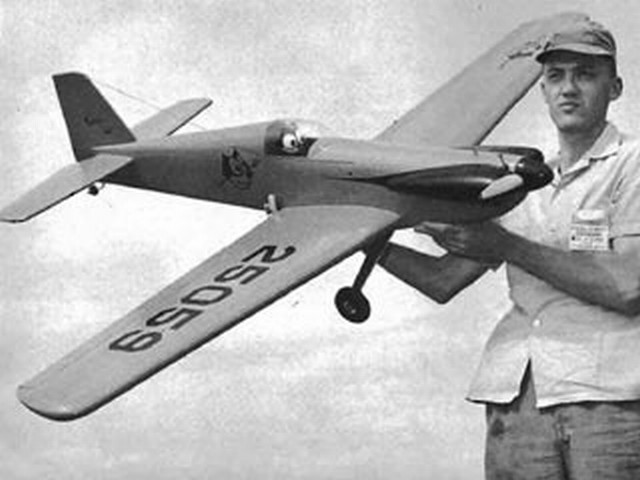