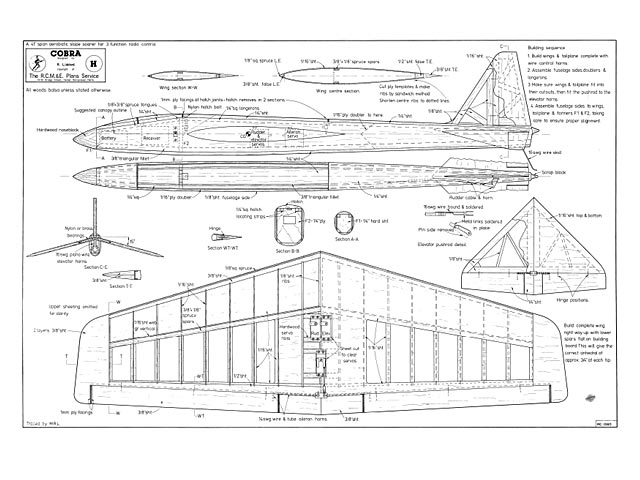 THE Cobra was developed during last winter. I felt, that with the excellent slope soaring sites we have at our disposal in this part of the country, a soarer plane capable of flying in light or marginal conditions wasn't really necessary. What was required was a small, compact, relatively simple model which would fly in the strong winds that prevail during winter months. It also had to be aerobatic, not in a competition sense, but something which would make for exciting, enjoyable flying. I also wanted to to look a little different from the established slope-soarer, but it is difficult to make an aeroplane not look like an aeroplane! After toying around with semi-scale jets, I disregarded them as being too complex for my purpose, but making excellent projects for the future and one or two have appeared on the slope already.

So, after much scribbling on scrap pieces of paper, the present layout was eventually produced. It is fairly small by most standards, only 41 in span but it has a wing area of approximately 430 sq in, a fully ten per cent symmetrical section was used, with the maximum thickness at 35-40 per cent of chord to give good penetration plus full acrobatic capability.

The anhedral tailplane was almost an afterthought, it seemed to suit the plane - what the aerodynamic qualities are I'm not sure, but they are certainly not detrimental to the handling. The plane will perform the usual looping maneouvres both upright and inverted, in fact it flies better inverted than upright, presumably due to the anhedral wing, but it does make flying upside down a little easier. In contrast the rolling manoeuvres are carried out at an alarming rate, so take it easy on the aileron control to start with.

Construction: This is fairly easy, start with the wing, which is of conventional built-up structure. The ribs are made by the 'sandwich method.' Due to the large variation in size from root to tip over a short span. all the ribs for both wings are placed in the jig and paired off after sanding to shape. Spar notches are cut off before separation. The wing is built the 'right-way' up with the bottom spar flat - so that the wing has a slight anhedral.

Cut the former F2 from 1/4 in ply increasing the width if necessary to accommodate your radio equipment and glue to fuselage side with epoxy. When set, glue F 1 into place making sure that the sides have equal curvature. Pull the rear end together and fit by placing a piece of 1.5 mm ply with sandpaper glued to both sides between the fuselage sides and moving back and forth until the desired fit is achieved. The top and bottom sheeting is from medium grade 1/4 in balsa, but just tack the top sheeting where the hatch will be..." 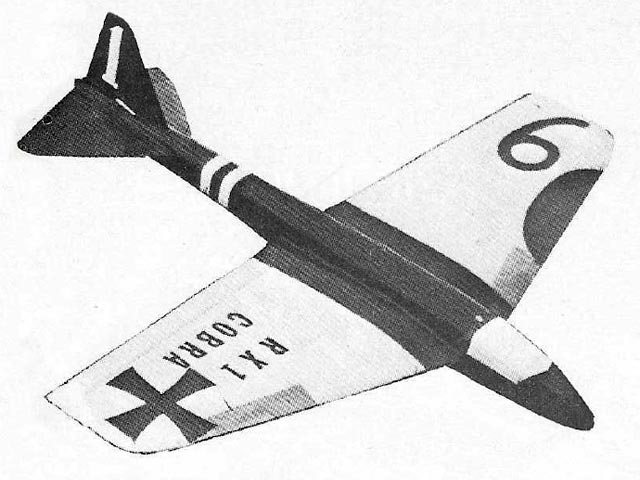