Remember the term? I did, shortly after watching 'D' who, while admiring his brand-new first-time plane, leaned over to brush that speck of dirt off his wing and had his Zippo fall from his shirt pocket through his wing. Welcome to our hobby, 'D', and meet our man, Murphy, who is alive and well! Fortified with this rare gift of creativity, we commenced designing a Quarter Midget racer. Actually, Snafu began to have a great deal of bench flying shortly after Don Dewey (alias the Sierra Madre Monk) proposed the RCM Quarter Midget rules from his Monastery.

The plane is patterned after the Curtiss X-P40Q, which came into existence near the end of WWII. Unlike earlier models, this one dropped the traditional high turtle back and went to a bubble canopy. This appeared as early as their 'G' series. Changes continued until finally a clipped-wing, bubble-canopy version emerged. This was the X-P40Q. Only three were built, and of these two were destroyed through ground testing. In 1947, Skip Ziegler entered the remaining '40Q in the National Air Races in Cleveland. It proved to be a formidable opponent until Ziegler was forced to eject close to the ground. The canopy struck and killed a woman, while remaining sections went into a New York Central railroad siding. Thus ended the existence of the X-P40Q.

A good racer should have certain qualities. I feel that Snafu offers a low-cost, high-performance aircraft. It meets minimum requirements and builds in under thirty hours. There is ample room to make gear installation easy and field servicing excellent. Using normal building techniques, you should be able to turn out a very clean 2-1/4 to 2-3/4 pound bird. Okay, put down your hot grape Kool-Aid and let's build it.

WING: For those who wish to do so, you may build it by drawing a set of ribs via the method described in the June issue of Dewey's gospel. To keep building time to a minimum, cut yourself a foam core, or head over to your local foam cutter and bribe him to do it for you. Many articles have been written on this type of construction, so I think general comments will suffice. The cores are covered with 1/16 balsa, using one 6 in and one 3 in piece. This gives you only one glue joint to work with. Be certain to sheet your core in the foam block as it makes a great jig, and the wing really will fly better without a twist..." 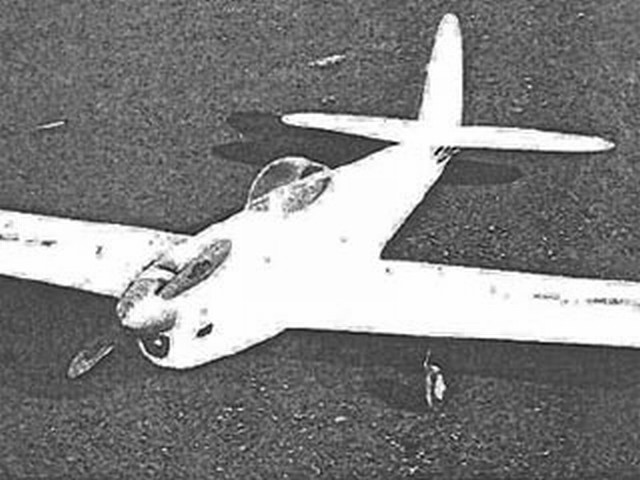