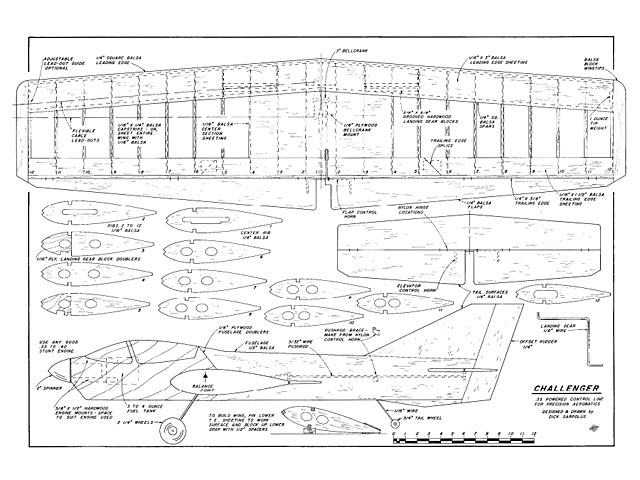 Quote: "Around control line acrobatic circles, a profile don't get much re spect, but they do have their place as an easily built pattern trainer. Several good ones are still available in commercial kit form, such as Top Flite's Tutor and Sig's Banshee and Twister. Their popularity continues, due to the ease and speed of construction of this type model. I designed and built the Challenger when I found myself without a decent stunter on hand: I wanted one quickly to get back into more serious CL flying again. but without the investment in time and effort required for a true full house aircraft.

To speed the project along, I used a Sig Super Chipmunk wing kit, their RP-BK-019. This easy-to-build wing provided a tradi tional 22% thick airfoil, 52 inch wingspan and 570 square inches of wing area, right for a .35 or .40 powerplant. Around this wing I laid out a fuselage with a 15 inch wing trailing edge to elevator hinge line dimension, and an 8-1/2 inch nose length. Horizontal stab area selected was 20% of the wing area, and tail surfaces and wing flaps were simply 1/4 inch sheet balsa.

The fuselage profile Is the usual 1/2 inch balsa sheet with inset 3/8 x 1/2 inch hardwood engine mounts and 1/8 plywood nose doublers. This basic construction has been around for more than 30 years now; it's simple and it works. The fuselage side area along with the fin and rudder were styled-for a modern appearance. The landing gear is in the wings for a wide, stable tread. Nothing revolutionary: they're proven areal size relationships that work.

I ended up with what I wanted: the plane isn't a competition machine, but it will do the pattern, and when I can spend the time, I can go to a more sophisticated model. Its certainly well suited for learning and perfecting your pattern flying capabilities without going to an all-out aircraft. I think it would be worthwhile to add a few features as you build this model. such as an adjustable leadout guide and a hatch for 'adjustable wingtip weight.

As you probably know, light weight is the path to success and a good flying aircraft, so try to select light balsa as best you can and keep the finish light. There are several options on the wing construction: buy the Sig wing kit, cut your own parts from FM's plans, or go with a foam core from Robin's Wing, 54 Sussex St. Newton NJ..."

Quote: "Steve / Mary, Here is the plan and article from the Flying Models Dec 1987 featuring the Challenger by Dick Sarpolus. The Challenger is a 52in Wingspan Profile Control line model for .35 sized engine. I re-sized this plan to full size without further changes. Thanks, George." 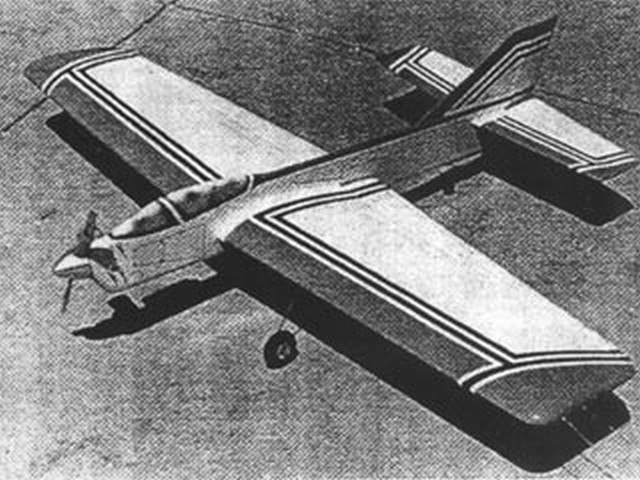