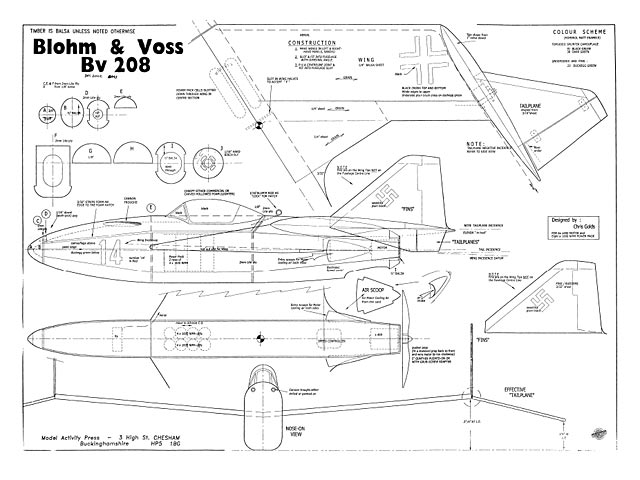 Quote: "A simple-to-build 32 in span, three-channel replica of a most unusual warbird, designed for electric power. The Blohm und Voss 208/04, by Chris Golds.

In March 1998, my wife Lauri kindly bought me the just-printed book entitled 'Luftwaffe Secret Projects - Fighters 1939 -1945'. It lists the very many projects (or Entwurfen) by numerous German aircraft companies designed to thrust the Luftwaffe fighter arm into a new realm of performance. Many of the shapes so produced were quite odd to say the least and the aircraft illustrated on the book's cover - the Focke-Wulf Ta 183 - has been tried by a number of EDF (electric ducted-fan) modellers without too much success so far.

Development: Some of the less fanciful designs looked to me to have considerable promise - especially for EDF. Notable amongst these was the Blohm und Voss 215 twin jet night fighter which I sketched up at about nine feet span for a pair of WeMoTec 90mm Midi fans. But I needed to 'prove' the shape first before building a large model which, with retracts, would need a fair amount of runway. My e-flying chum, Ron Laden, dropped in to talk amps and watts and, while leafing through the book lying on my work-bench, he said that looks promising for a 400 pusher! He has just produced his A-7 for such a set-up and it goes like stink! So.

In August 1944 Dr Richard Vogt designed a pusher-piston powered flying wing, utilising outboard 'tailplanes/elevons' for pitch and roll control, thus allowing almost the whole wing trailing-edge to be used as flaps, to accommodate the higher weight caused by the necessary use of steel rather than aluminium for much of the airframe. The design became the base-plate for a series of proposed aircraft, which varied mostly in the choice of powerplant.

When I looked at the FW 183 drawings, my design brain said - don't like it - but the BY 208 drawing rang lots of bells which said, this WILL work. With its single pusher prop I could tackle it using a Speed 400 six volt motor with a direct drive Gunther prop off about eight small cells of NiHM type which Ron has used with much success. This meant a small model similar to my 'Shinden' using an identical and inexpensive power train.

Chuck it and see! For me any unusual shape means unusu-al C of G calculations and so I reverted to my standard practice of making a light-weight sheet chuck-glider half the size of the proposed Speed 400 model. The 'chuckle' only took about one hour to design and build and, despite the miserable weather conditions (we live high up a hill in the West Country and I was in cloud with drizzle but NO wind) I went out to chuck. A man's gotta do wot a man's gotta do, etc!

I was amazed. At my predicted CG and tailplanes negative incidence, it glided straight and flat on a very shallow descent until it met the inevitable tree and stopped. I rescued the glider and took it back into my workshop to balance and establish the actual CG. This point I transferred to my drawings of the full-size 400 model, exactly twice the size of the chuck-glider.

As the 400 model would also fly with a flat plate wing section I felt certain that the balance position would be correct.

Construction: In a fever of delight (cos I just love flying wings) I began to cut balsa and in no time at all I had a fuselage structure with hollowed blue foam top and bottom deckings (very much easier than trying to balsa plank). The wings, from soft 1/4 in, were quickly made and sanded and followed by the fins and tailplanes/elevons. By the end of the first day I had an entire airframe in one piece! If you build this FSM plan, note that the wing trailing-edge is sanded on the underside ONLY - this is to provide some small amount of reflex. And you MUST get the tailplane negative incidence right too!

I mounted the Speed 400 six volt motor (wired back-to-front for reverse action) and made up the 1600 NiHM pack from the cells I had just purchased from Stephen Mettam of the Electric Aeroplane Company. The bench runs went as predicted at ten amps and about 90 watts using the excellent Gunther plastic five inch prop - do not be put off by its 'toy shop' image, it is an amazing propeller..."

Quote: "Greetings Steve, Attached is Chris Golds' Blohm and Voss 208 published in AMI, not sure of the year. I'm building this one now, so far the most challenging part has been the wing tip pods. Thanks for Outerzone. All the best, Rocco" 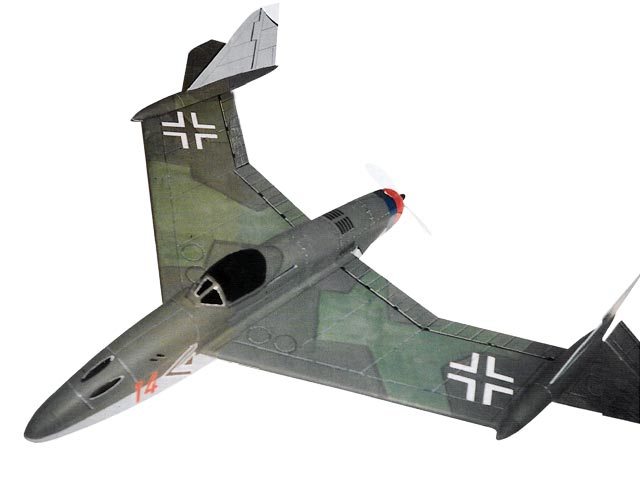 I built this several years ago from a plan in a magazine. It was hard to learn to fly, after that it was a lot of fun! Now I would use a lot of foam to replace the wood they show u to use. The second one would go a lot quicker in construction time. I still have the old model. I should make the time to fix it.
BobTaylor - 31/05/2016
Fix it and send us a photo Bob, we'd love to have a better one!
Mary - 31/05/2016
Add a comment