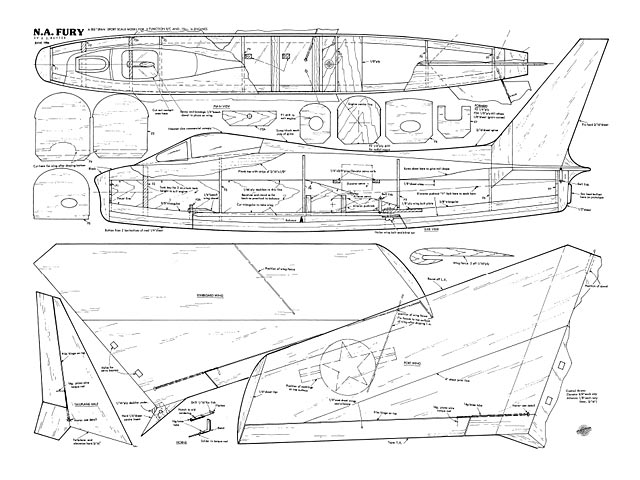 North American FJ-3 Fury. Sport scale model of the US Navy jet fighter, for 2 function radio and .15 cu ins engine. No detailed engine installation details shown, but design is for a tractor propellor.

Quote: "OK, are you ready for this? John Rutter's .15 powered North American FJ-3 lookalike is quick to build - and even faster to fly!

My most reliable and most used model for years was my Me 163 Komet (see Nov '85 issue); it was compact, cheap to fly and great fun. However, a combination of a leaky clunk tank and a number of minor accidents (pilot errors, I'm afraid) meant that a replacement was needed. I felt that another jet style model would be suitable and picked on the North American FJ-3 Fury as it's a bit different and has a short nose which is useful to offset the effect of sweep back on the CG position.

The model presented here uses the two channel gear from the 163 but a throttle could be added if you want. I wouldn't put a bigger motor in it though, as it is a very fast model anyway.

Getting cracking: As usual for me, I started with a kit of parts (photo 1) and then assembled the flying surfaces using fairly firm 1/4 in for the wings and 3/16 for the tail. There is not a lot to say about them except that the grain of the wood should follow the leading edges for stiffness, apart from the control surfaces where the grain should run along their length. I top hinged the ailerons and elevators with film and used ball link connectors due to the sweepback. (Photo 2).

The wing centre section is reinforced with a narrow strip of thin glass and the retaining dowel and aileron bearers epoxied to the top surface (don't add the latter until the wing has been cut free of the fus later on). The dihedral shown in scale and the model, as a whole, is to scale outline, the only cheats being in section and the width of the wing chord which is extended by 1in on the LE. All control torque arms are flattened, drilled and bent brass tube to suit the torque rod wire used (16 or 14g).

The fus sides are reinforced with 1/64 ply to the line shown on the plan, using an impact adhesive. The centre three formers are glued to one side with that side flat on the plan. The other side is added and, when dry, the tail and then nose formers are glued in place while pulling the sides in with tape or elastic bands. The size and position of F2 may vary with the motor you use but it has to be accurately epoxied in place. I didn't find either side or down thrust necessary..." 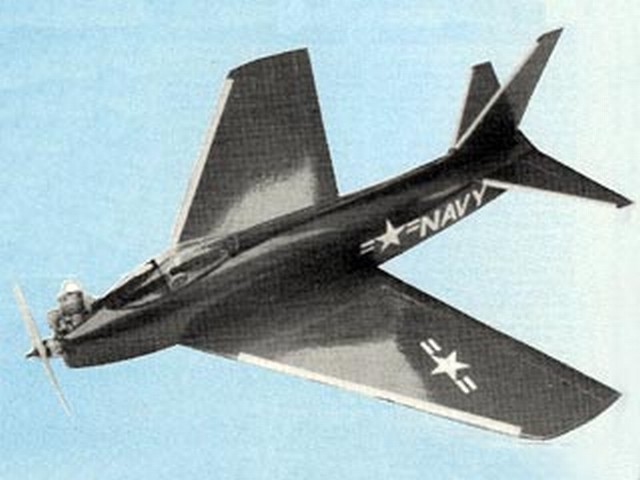