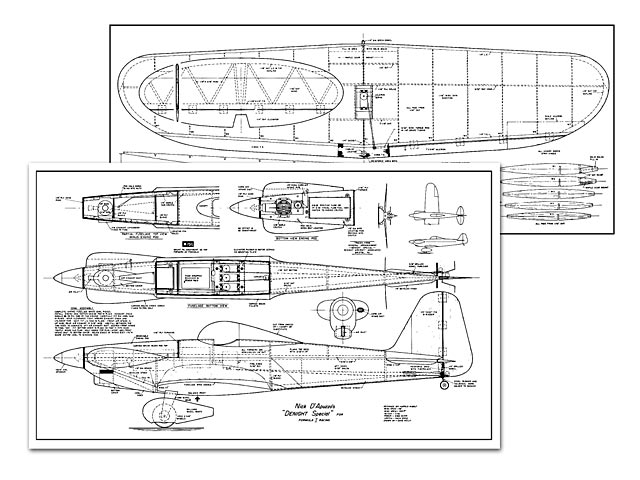 Quote: "Denight Special. Hal deBolt has been winning Pylon Races with this design for several years. Its unique featrures are well documented in the text.

The Denight Special is the third in a series of Goodyear racer designs. You would think that it represents the experience gained from the previous two, which were more or less successful, depending on whom you talk with. The main problem with it is that it appears to be no faster than the No.1 design, just as No.2 was no faster either! When you are racing, no increase in speed would seem equivalent to no progress. However, in this case a little tempering is in order. No.1 design turned race times which are just now being seen by other models. What has No.3 got going for it that No.1 did not have? First of all, No.1 is no longer legal - it fell under the 'prototype category.' Thus, No.3 is as close as we can come to the first one and still be legal. It is also improved and a much more usable model, es-pecially as far as maintainence is concerned.

With the Denight the big effort was to make it 'more scale' than any other Formula I design. You need the handicap in your favor to win today. The main problem is obtaining accurate drawings of the original airplane. Frankly, most of the drawings available vary as greatly as the draftsmen who drew them. One racer which was built in this area serves as an example; luckily, the builder is still around and had the original paperwork from which he built the airplane. But how do you come up with drawings to build a model from, when all he used were some dimensions on a scratch pad and chalk lines on a hangar floor? Yet, three views of this airplane have appeared - all profess to be authentic. Such is the case with most of the Goodyear designs available to us.

Choosing the Denight Special as the airplane to copy neatly solved this nasty problem. This racer was designed, and its construction supervised by Nicholas E D'Apuzzo of Ambler, Pennsylvania - the Bristol area where the airplane was built by the Denight Aircraft Associates. Nick is one of those wonderful people who seem to realize the peculiar problems which we modelers can have. During the course of my research into the Special, I had nothing but unlimited cooperation from him; the result being authentic factory drawings of the original airplane. Then, as luck would have it, D'Apuzzo attended the Philly Nationals and had the chance to observe first-hand the three examples of our Denight model which were there. The Denight is but one of several highly successful full-scale machines which D'Apuzzo has developed, including the PJ-260 aerobatic bipe.

With the scale angle taken care of, the next chore was to be sure our model would be the quickest and most usable our experience could provide. The basic features of the Denight are not run-of-the-mill or taken from all other successful racers, by any means. However, these features were proven very well in our No.1 Goodyear, the deBolt Special (oz2534). Fundamentally, the concept involves absolutely clean lines, low-drag progressive laminar airfoil, solid stability and a minimum of frontal area. The greatest change in the Denight was reduction to the minimum size required by the rules. No.1 was nearly 10 percent oversize.

One new aerodynamic principle is the use of a single aileron for lateral control. The why of it can easily be seen: obviously, one is easier to install than two when both are not necessary. In addition, it is a simple search for more speed and ease of flight. NACA data indicates that a considerable portion of the wing drag comes from the openings around the ailerons. If you cut the number of ailerons in half, you are bound to have less drag (from the openings) by a factor of 50 percent.

Remember that the one remaining aileron still creates drag, especially when it is moved from neutral. If you place the one aileron on the right-hand wing panel, this panel will be on top when flying a left-hand pylon turn. Theoretically you use aileron to enter the turn; the off center drag as the wing is forced to perpendicular causes the airplane to yaw to the right as you enter the turn. What this means is that you can fly into the turns much harder with the nose down and yet the reaction from the single aileron will keep the model level as it progresses through the turn.

In actual usage this system can shake you up when you first shift to it from a dual-aileron system. Basically it works just as planned, except for two things..." 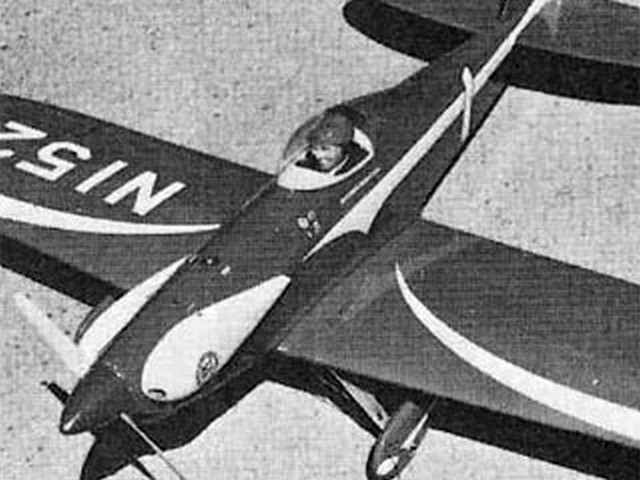