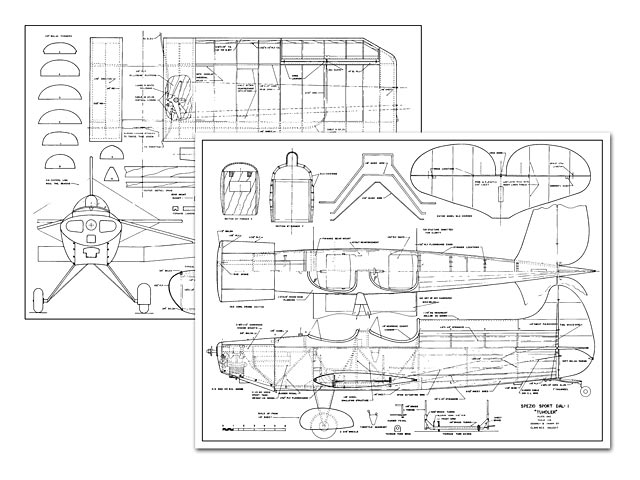 The selection of a Scale subject for today's competition is one of the most difficult tasks facing the Scale modeler. Gone are the days when all that was re-quired was a close resemblance to a set of questionable three-view drawings, a non-scale glossy finish, and lots of bent pins and thumbtacks in the cockpit. Often the meet was won by the only ship able to struggle into the air and complete a lap or two without the Scale crash bit.

To win in Scale today one needs a model that appears to be a real aircraft magically shrunken to model proportions. This must be backed by complete documentation in the form of accurate and detailed drawings, photographs and specifications.

By visiting the larger meets and reading model magazines it becomes apparent that a new trend is developing: the scale homebuilt. There are many good reasons for this. Any aircraft built in the home workshop, for example, can be duplicated part by part by the modeler if he so desires. There are usually no elaborate fittings or forgings to duplicate and similar materials are used in constructing the model. Another advantage is that authentic scale documentation is usually available from the original designer! Also on the plus side are the variations seen on given home-built designs such as cowlings, wheel pants, etc. Be careful on this one, however - you must be able to document your version. If the variation desired is difficult to document, then you are bet-ter off building a scale model of the prototype. You may, however, exercise some freedom in paint schemes and numbers as long as the original design is utilized.

Before selecting the Tuholer as a subject, I researched eight airplanes in this general category. I settled on the Tuholer for a number of reasons. My first interest in Control Line flying is stunt and I wanted a subject with aerobatic capabilities. The Tuholer has ideal moments and nearly 500 sq in of wing area. With an adequate engine this plane will not be aerobatically disappointing. In fact, the ship flies like a typical non-flapped stunter, and is smooth and responsive.

I made two scale deviations on the original: a symmetrical airfoil and an enlarged horizontal stabilizer. The plan shows the scale stabilizer length, but if you are not interested in aerobatics, the ship will handle well with the smaller tail surface. Deviations from scale must be listed in your documentation and will cost you a few points; they are minor compared to the aerobatic flight points possible with the slight modifications.

While we're on the subject of scale documentation, the winter 1971 issue of Air Trails Sport Aircraft is a good source and the October 1966 issue of Sport Aviation, the official publication of the Experimental Aircraft Association, has a lengthy article on the Tuholer. Both issues are available and have three-views with dimensions as well as an excellent cutaway view giving many usable details. Plans including many photographs are available from designer Tony Spezio for construction of the real airplane.

There are several features any scale model in this category should include. In general, adhere to scale rib and stringer locations as well as proper control hinge locations. Fabric areas should be silk-covered and finished with enough dope to fill sufficiently, but the fabric weave should be visible. Sheet metal-covered areas should be well filled with the proper 'edges' apparent. Any sheeted areas, such as leading edges, should be duplicated and trailing edges made as unobtrusive as possible. The cockpit should have moveable rudder pedals and sticks that follow control movements. Scale structure should be visible in cockpit area; instruments, switches and secondary controls should be properly located and duplicated. Give careful attention to tail-wheels as many points can be added here. Throttle control on the engine is well worth the effort, however the added drag of the third wire will make aerobatics risky unless an engine in the 40-45 class is used. You will have to be the judge.

Construction: The Tuholer is not a beginner's project so this will not be a glue-stick-A-to-former-B article. My comments on construction are limited to specific details which may be of help.

The fuselage should be started first and is simply sheet sides attached to the plywood former and engine mount as-sembly. Stringers and sheet fillers complete the sides. Formers in the after fuselage are built up from 1/8 x 1/4 strip stock and the sides are joined at the tail post. The fuselage construction should stop at this stage to allow easy assembly of wings, tail surfaces and landing gear. The wing is built next..." 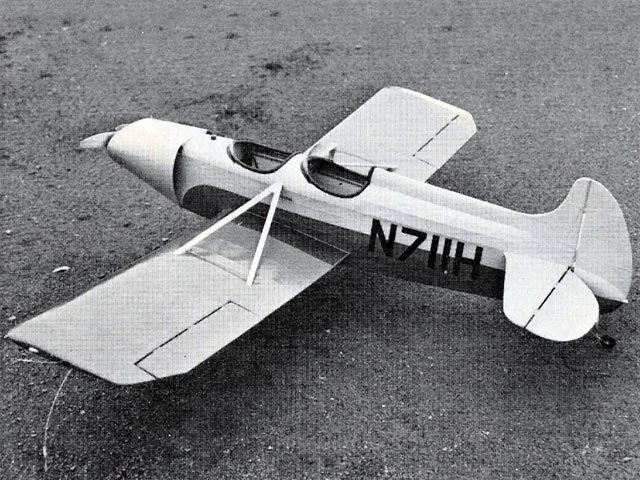