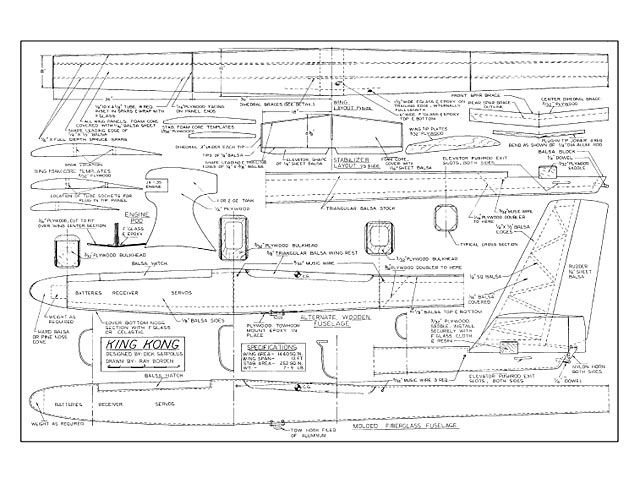 THE KING KONG was designed for one purpose - to win in soaring competition. And that it has been doing. In three East Coast RC soaring contests in 1969, the Kongs placed first and second at Dover, third and fourth at Lakehurst after leading in all rounds except the last, and' fourth at Columbia. They showed an amazing, and unexpected, ability to float in dead air. The two Kongs now flying weigh seven and a half and eight and a half lbs, but they still float as well as or better than the lightweights. They glide fast enough to cover a lot of territory and penetrate wind extremely well. Because of their large size and swift flying qualities, they can go far downwind - which is where it seems that the best thermals always are to be found.

The design was somewhat of a group effort. Dr Ed Morris started the trend to big gliders in our club with a 12 ft model. Then we got together with Doc to make a fiberglass fuselage pattern for a new design. Fred Kingsbury, local fiberglass expert, made the mold and the fuselage pieces. Joe Roslyn did some airfoil research and picked the Eppler E 387 section. Then we got together to settle on the overall layout. The prototype was made up with Joe's choice of wing and the fuselage and tail I selected. It flew so well a second model was quickly finished, and we headed for the contests. Some further comments on the de-sign are in order. The fuselage was made as small in cross section as was felt practical. It has proved to be quite strong, surviving several almost straight down landings. The horizontal stabilizer has dihedral to protect it on landings, keeping the stab up off the ground. The tail assembly is held on with rubber bands for simplicity and for ease in fitting the plane in a car.

The wing breaks at the polyhedral joints because it was felt that the most strength was needed in the middle. This was achieved with four plywood dihedral joiners and fiberglass cloth. Polyhedral was used for better turning ability. It doesn't look as good as straight dihedral, but the plane will really hang in a turn which helps in the thermals. When the first wing was assembled, ten degrees dihedral were put in the middle. We looked at it and decided it needed polyhedral, so five degrees were put in the tip joints. A few test glides were made this way, but then we went to ten de-grees at the tips too..." 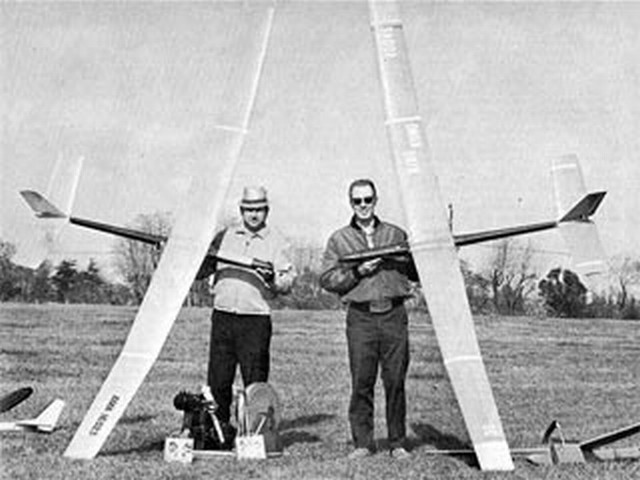