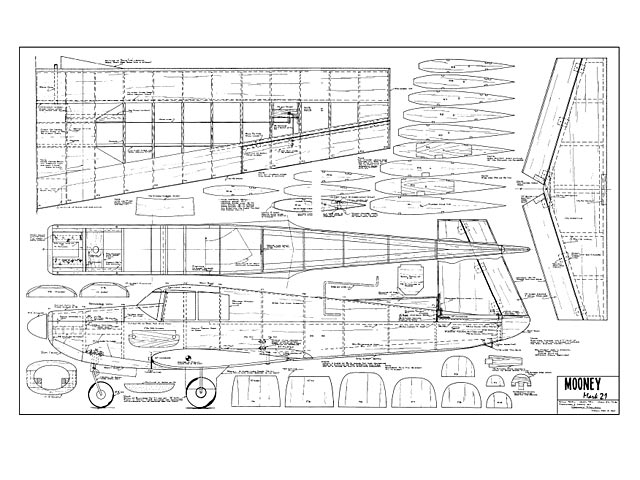 Quote: "Designed as a functional stunt model, our semi-;scale R/C continues the trend towards realism. It has that 'Looks-Like' appeal. Span is 70 in. Mooney Mark 21, by Gerald Nelson.

MY Mooney is a semi-scale stunt model which resembles a 1963 Mooney Mark 21. It is intended to be a stunt job first, a scale job second.

No major breakthrough in the state of the art has been made with this design. It is intended to be an interesting looking, functional stunt model using basic con-struction techniques and materials. Regarding the semi-scale aspect of this ship, several excellent articles have been writ-ten lately noting the trend towards real-ism in stunt models. This trend is gaining momentum and I am pleased to see this happen. One of the purposes of Mooney design is to encourage and promote this trend.

The original, classic stunt job theme - Kwik Fli (oz6526), Taurus (oz612), etc - will be with us for sone time. This type of model flies excellently, is easy to build, and has an excellent contest record. However, there are flyers who are looking for something different. They want a design that they can identify with a full-scale aircraft.

R/C models are tending to become miniature aircraft, and not toys. To help the image of R/C model airplane flying as a sport, realistic-looking designs are needed instead of our standard 'toy air-planes.' Take a design like the Mooney to a flying session and watch the specta-tors group around the ship. They may or may not recognize it as a Mooney light aircraft, but they will recognize the fact that it looks like a miniature light air-craft. When you fly the ship all eyes are watching its progress in the air. After the first flight, the flyers of the unrealistic ships can be seen comparing their stereo-typed jobs to the Mooney. They usually go home saying something to the effect - Maybe I should build something like that Mooney.

You are not at a competitive disadvantage with this design. It will do all the new 1968 AMA maneuvers, plus a few other maneuvers that might come into effect in 1969. The list of 1968 maneuvers will probably grow. The Mooney has the requirements for the future maneuvers.

The only disadvantage of the Mooney's design is a little extra work in building the fuselage. There are a few extra deals, like the hatch, rounded fuselage top, wheel-well doors, and a scale-like paint job. When you think about it, the extra
work isn't very much. The almost scale fuselage width will allow any kind of radio to be installed with room left over. There is also ample room for a retractable landing gear system, if you want one.

The wing span is somewhat large by current standards (70 in). It is highly tapered, which brings the wing area down to normal areas. The airfoil is a relatively thin, symmetrical section. This section is advantageous for the flying performance we now require. The ship flies at a good speed, and can slide through the maneu-vers instead of being pulled through them by brute force. The section also provides an excellent glide path by forcing the model to fly slightly nose high..." 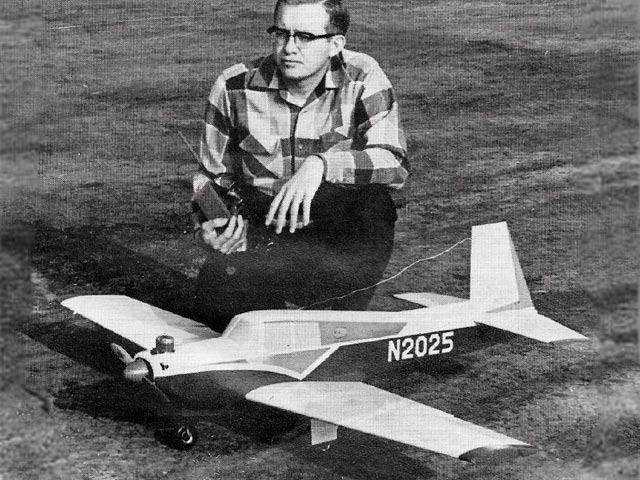