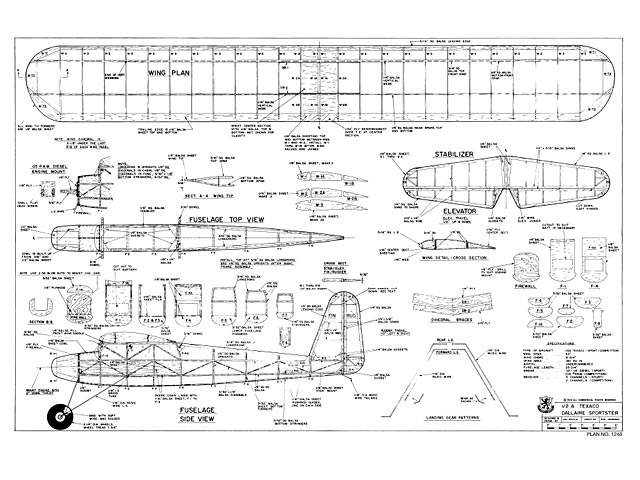 Building and flying 1/2A Texaco R/C models is great fun. The models are simple in structure, cost very little to build, transport easily due to small size, and they fly beautifully. And if you're contest-minded, SAM holds low-key fun-type contests all over the USA for these models. These , are SAM's most popular models in competition! Cox even makes a special #4506 Texaco .049 that looks like their Black Widow but is subtly altered to turn a 7 x 3-1/2 around 9,000 rpm for about six minutes of climbing power. I call it a 'Coxaco' engine as do many others. Contests are usually won with two 15-minute flights and an unlimited duration third flight to break ties.

Best of all, the rules allow you to scale down your favorite best-remembered gas job design from before December 31, 1942. The best flying 1/2A Texaco models seem to have 300-350 sq in of wing area and the wing loading minimum is 8 oz/sq ft of wing area. If you're a scale lover, the newest SAM event is for 1/2A Texaco scale models of the same vintage. If you design your own and it flies well, you may stand a good chance of getting it published here in RCM!

My good friend, Lou Davila, loves small models. One of Lou's all-time favorite gas-powered free flight designs was the Dallaire Sportster (oz6098). It was kilted by the Dallaire Model Aeroplane Company in 1936, had a 108 inch wingspan (it was huge for its time) with over 10 sq ft of wing area and it looked like a sleek real air-plane. It sported a rounded windshield, enclosed cabin with see-through windows, and had stringers forming a rounded lower fuselage section. In those days, it was a kid's 'dream model' and it still looks good today. Lou found an original set of Dallaire Sportster plans in Dan Lancaster's archives (nice name for real old model stuff) and then bought ModelCAD ($99.00 from ViaGrafix, at: One American Way, Pryor, OK 74361 - they usually advertise here in RCM) and the plans you see here are Lou's results.

For Sunday Fun flying, Lou uses a PAW .03 diesel bought from Doctor
Diesel (Eric Clutton, 913 Cedar Lane, Tullahoma, TN 37388) and his Cannon radio system's two servos are augmented by a tiny Tower Hobbies servo to operate the PAW's R/C carb so he has throttle control along with rudder and elevator. One photo shows the PAW .03 and the simple plywood engine mount Lou made that matches the mounting bolt pattern of the Coxaco, so the two engines easily interchange. For contest work, the Tower servo comes out to save weight and the Coxaco goes in with a 7 or 8 inch prop.

It's interesting how the name 'Texaco' originated with model airplanes. In the 1930's Texaco Company sponsored many model plane contests and the publicity they derived has lasted for over 60 years. The volume of fuel for the model engine was allotted by total model flying weight. A larger and heavier model was allotted more fuel for its engine to run longer and maybe get the model up as high as a smaller and lighter model; it was an interesting concept that worked. Today's 1/2A Texaco models are allotted 8cc's which is the capacity of the tank on the Coxaco engine. The newer and larger 'A' Texaco models (a SAM provisional event) allow engines through .20 displacement and allots 14cc's of fuel which is about a half ounce as held by a Perfect #5 metal fuel tank..."

Note there are some unclear areas in this scan. If anyone has a clearer scan, that would be great. 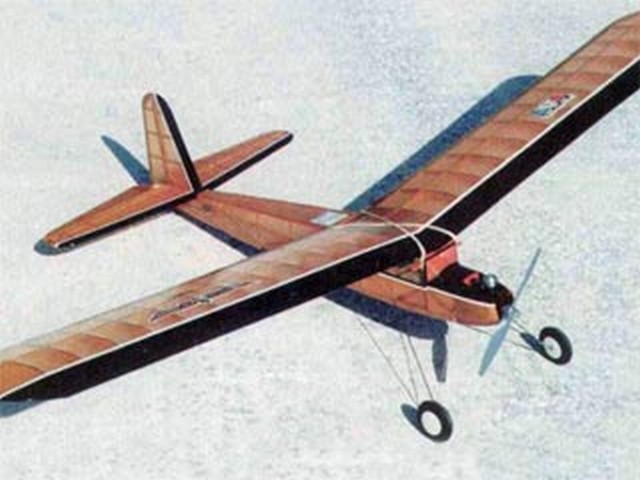 Hi Steve, I've built four planes from your plans. This is the Dallaire Sports [more pics 003]. You're providing a great service to us balsa builders with your many fine, free plans. Keep up the good work.
BobK - 03/10/2016
Add a comment