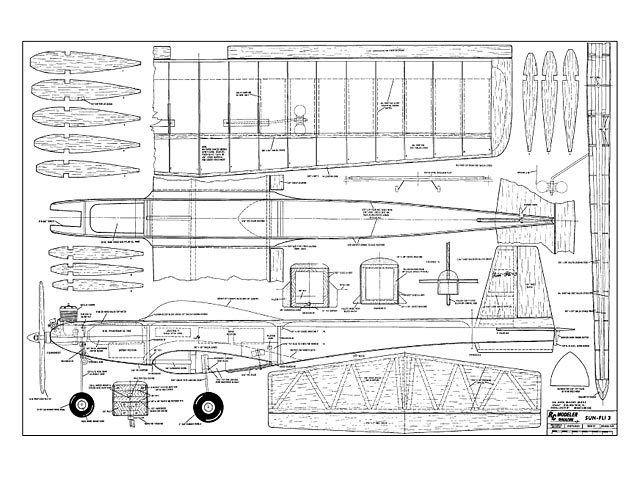 Quote: "The Sun Fli III is one of the most consistent contest winners in the nation - placing in virtually every contest in which it is entered. Its slow, nose-high main gear landings are a sheer delight. By Joseph Bridi.

R/C Modeler Magazine is proud to present Joe Bridi's Sun Fli III. Joe, a member of the RCM field staff, is a top stunt and Goodyear pilot, usually ending up in the top five places of the majority of contests which he enters. Joe has been respectfully called, by his many friends, a 'gentleman sportsman.' The Sun Fli III is, somehow, this type of airplane. There is nothing radically different about it - it doesn't scream through the air at break-neck speed - it can be one of the most docile stunt aircraft you'll ever fly - yet it has, over the years, placed in the top money in virtually every contest in which it has been entered including a first place win at the Mexican Nationals. The man and the plane are a familiar sight at contests throughout the Western States, as Joe has flown this same design for several years. A consistent winner, the Sun Fli III could be your entry into the winner's circle in 1968-69.

THE Sun Fli III, like the majority of Class C pattern model aircraft, had a host of ancestors. Different airfoils, tail moments, and shapes were used with the thought in mind that we wanted a docile type model that would still do the AMA pattern. The model itself had to be fairly easy to construct, cutting down the building time to a minimum in order that more time could be spent at the flying field rather than at the garage or basement work-shop. I think that you will find the Sun Fli as easy to construct as it is to fly, therefore construction notes will be kept to a minimum.

Construction. The fuselage sides are made from 3/32 by 4 in balsa sheet with continuous vertically grained 3/32 balsa doublers the entire length of the fuselage sides. Contact cement is used to laminate the doublers and sides together. Two balsa and one 1/8 in plywood bulkheads are the only bulkheads used in the fuselage.

I, personally, prefer hardwood beam motor mounts, so these were always used in the various Sun Fli models. Either maple or oak will work quite satisfactorially in this application. The top fuselage block was a tapered 1 by 4 by 42 inch soft balsa plank hollowed out to reduce weight. The hatch at the fuel compartment was made of pine to minimize warping or cupping of the hatch itself.

The rudder and elevator are constructed in the conventional manner - using an internal framework with 1/16 balsa sheeting on both sides. Once the framework was built over the plans, contact cement was again used to laminate the sheeting and the framework together. The rudder and ele-vator was also built flat to reduce the amount of labor spent in constructing these surfaces. I also feel that the flat sur-faces are just as good, if not better, than the airfoil type sections.

The wing is the only part of the Sun Fli that is a little difficult to construct due to the progressive type airfoil. The actual method of construction is conventional except that close attention to proper blocking of the wing is necessary to reduce any possibility of building a warp into the wing. Any model aircraft that is not true is that much harder to fly. If you want to bring that hardware home from the next contest, make sure you use the best construction techniques possible..." 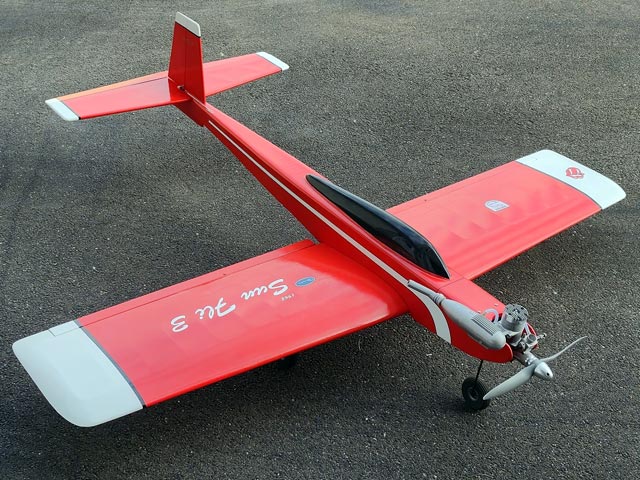