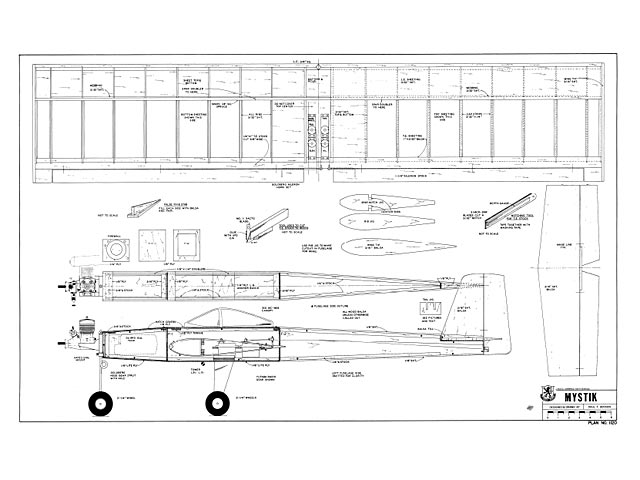 Probably the most copied airplane that has ever been designed is Phil Kraft's Das Ugly Stik (oz5175) which was published in Grid Leaks Magazine in 1966. You can look through the advertisements and find replicas from a Little Bitty Stik to a Great Big Humongous Stik, a Pretty Stik, a Sweet Stik, and even a fragrant Joss Stik. They have every size engine from a Cox .02 Pee Wee to a three cu in Quadra.

We have built a number of these planes in the .20 to .40 bracket ourselves and have enjoyed building as well as flying them, they all have an excellently designed beginning.

Mystik is an acronym for mid-wing stik. We started with Mistik, 'MI' for 'mid' but me just didn't like the way the word went together. Even though the 'MY' might inadicate that this is our personal stik, doing this article should indicate that we want to share it with you. So Mystik it is.

If Mystik looks something like an Ugly Stik you are right, it was designed that way, but like all the others it is a bit different. We were kind of tired of having a high wing configuration so we thought of putting the wing on the bottom, or is it, turn the fuselage upside down and stick the empennage on what is now the top.

We are not into taildraggers, our planes must have trike gear. That brings up one of our pet abhorrances (we too have a thesaurus) planes with landing gear on the wings. The wing lays there propped up at a dismal angle with the wheels and the ailerons on the floor. The fuselage has a nose wheel and will not lay flat in the back of the station wagon, it cants itself up on a stab tip and the wheel.

We insist that the main landing gear, along with the nose gear, be on the fuselage. Incase you haven't discovered it yet, this is a one piece airplane. Once you put the servos in the plane, run the pushrods, and install the aileron torque rods, the wing is in place and cannot be removed. We have a small hatchback automobile and all the planes we have designed with a 54 inch wing will fit in the car with the wing in place. Oh yes! Fitting in the car was another of the design criterion.

We have been using Romney Bukolt's design parameters, as published in the January, 1981 issue of RCM by Ken Willard, for many years. We have found, over and over, that a plane constructed with these specifications will fly, so we used them to design the Mystik.

Here are some of the features we incorporated. The fuselage is exactly 36 in long, a length of 6 x 36 in lite ply will make the fuselage sides and bottom. If you start with a 6 x 48 in slab of lite ply, you will have enough wood for the formers and the hatch covers. The wingspan is 54 in, the wing chord is 11 in giving an aspect ratio of just under 5:1 which is just about right for a sport plane.

A piece of MonoKote cut from a roll will mach from the side of the fuselage to the wingtip without splicing. The rib design is such that the bottom is straight enough no the wing may be constructed flat on your workbench without any jigs or spacers. Pin the trailing edge bottom sheet to the plans, pin the bottom spar in place and start insert-ing wing ribs. The fuselage is a box. pin down one side, erect the formers and fire-wall, and add the other side - just that simple... " 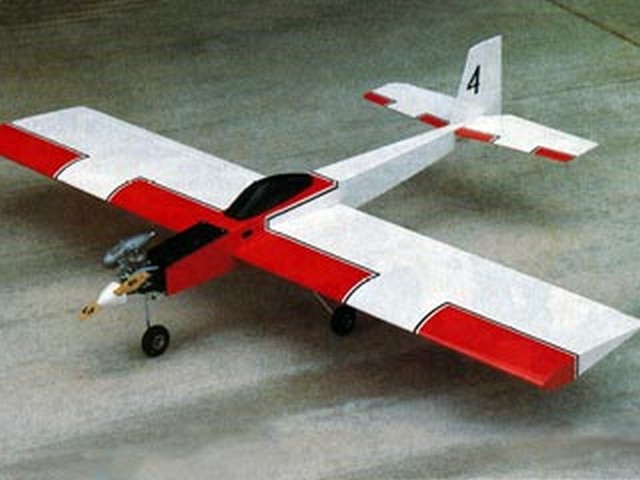