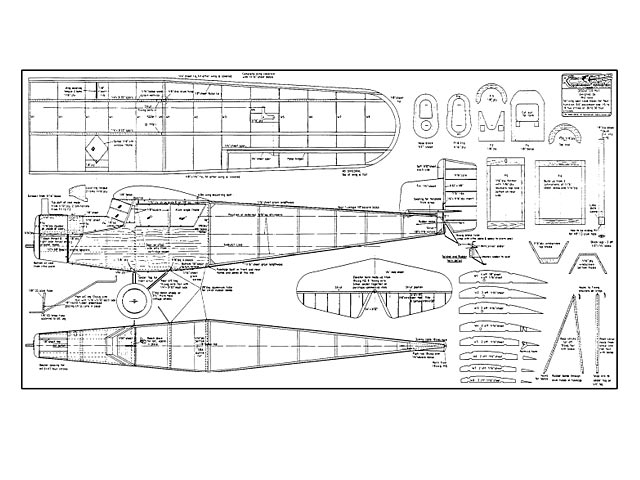 Quote: "With a wingspan of 54 inches, this little gem designed for .20 four strokes upwards is still a practical size. Desoutter MK1, by Phil Kent.

Being interested in 1920/1930 civil aircraft I was quite taken by a photograph of the Desoutter Mk.1 Monoplane G-AAPK. Not that the aircraft was beautiful, but it had a rugged charm and its registration bore my initials. What better excuse to build a scale model? I had previously built the ABC Robin (oz10258) for club 20 scale and felt that the Desoutter would be a good companion.

Documentation for this model is much easier to obtain than for the Robin. I looked back through my old Aeromodeller magazines as I could remember seeing a 1/72 scale drawing of the Desoutter. Sure enough there it was, September 1944 issue. G-AAPK was owned by National Flying Services and was painted in their attractive house colours; black and orange fuselage, silver wings and tail, white lettering on the fuselage and black on the wings. There were several other schemes including G-AANB which was yellow with silver wings and tail with black lettering. This aircraft also had low pressure airwheels rather than the vintage Palmer Cord type.

The Desoutter Monoplane was built under licence in England to a design by the Dutch Koolhoven company. It was a wooden aircraft, the fuselage slab sided with spruce longerons covered in 1-1/2mm plywood. An unusual feature was the external stringers which ran down the outside of the fuselage. The wings were fully cantilever using spruce and plywood box spans and spruce ribs, the whole structure being covered in plywood. The tailplane was also ply covered but the rudder and elevator were fabric covered steel tubular frames. The undercarriage was of a very wide track, a very useful feature for a model.

Perhaps the De-soutter's biggest claim to fame was that it was the first three seat cabin monoplane to be built in England. I had decided that the Desoutter would take the place of the ABC Robin for club 20 scale competition work and decided on a scale of 1/8 which gave a wingspan of 56 inches.

I had also wanted to keep the structure light as the power was to be the HP VT-21 again. As things have turned out the all up weight is less than 3-1/2 lbs and the little four stroke has all the urge neded.

The construction should not present any difficulties to modellers who have man-aged a couple of built up models. Do not worry too much about getting a super finish on the model, the full size aircraft tended to cockle with its ply covering also the model will be viewed at 10ft for static judging if used for competition work.

Wings: First cut out all the wing ribs from medium 1/16 and 1/8 sheet balsa. The wings are made in three pieces, a centre section and two outer panels. Each is made separately and joined later. For the centre section, pin down a 3 in wide 1/16 sheet leaving equal spaces on each spar. For the outer panels the 1/16 sheet pieces are tapered and pinned down. The six remaining pieces of bottom sheeting are pinned in place and the original pieces removed for fitting later. The spars are now glued to these pieces of sheet after checking the spacing with the ribs..." 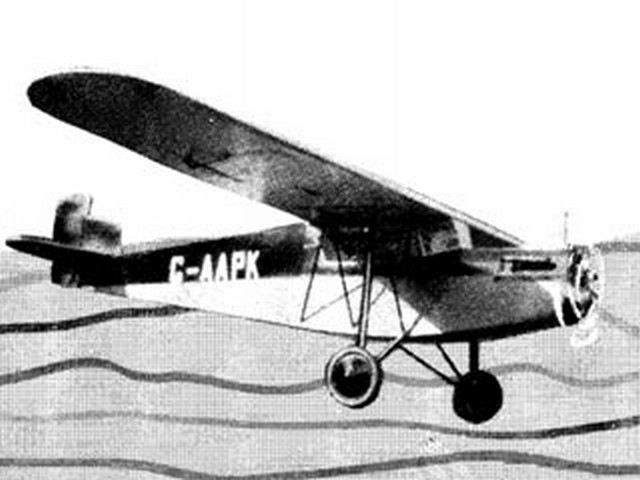