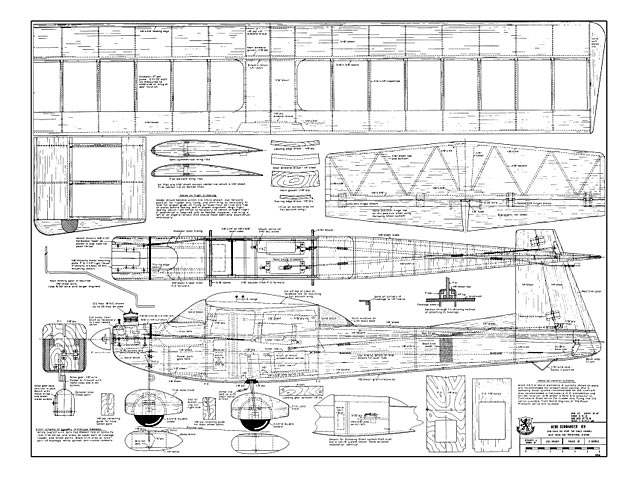 Quote: "For digital or pulse proportional, this 54in span semi-scale version of the AC 100 is ideally suited for the sport flier. Aero Commander 100, by R Jess Krieser.

In an unofficial sort of way, this article has become part 2 of a 3-part series that began with the Cessna Skyhawk features that appeared in the January, 1968, issue of R/C Modeler Magazine. Part 3 will appear in a future issue, and will feature the Aermacchi-Lockheed AL-60 Santa Maria. Those of you who read the Sky-hawk article will recall how the Skyhawk was developed, and how I reworked the Skyhawk configuration so that it would resemble the Aero Commander 100. The results have been most gratifying, as the Aero Commander 100 has all of the good performance characteristics of the Sky-hawk, with a slight advantage thrown in for extra measure.

That advantage is due to the swept-forward 'Mooney-like' fin and rudder on the 100. It gives the ship better stalling and spinning characteristics than the Skyhawk, as the rudder is never blanketed by the elevators when at extreme angles of attack, as is the case with the swept-rudder designs. Recovery from spins is faster and more positive, too. Another advantage of this will be evident to those who fly with Galloping Ghost systems, as the sweptrudder will always give a component of up-elevator in turns, which at times can be undesirable. This characteristic is not present at all with the Mooney-like fin and rudder. Herb Abrams, the Rand man, was quick to recognize this when looking over the original Aero Commander 100, and pointed out the obvious advantages of this for GG systems. He liked the 100 so much that he left my workshop with it in his possession, and is now flying the pants off of it. In his comments on the advantages to GG of the tail configuration, Herb stated that the Aero Commander 100 'has got to be the prototype of all G-G designs'.

When Orv Broberg (of Du-Bro Products) and I got together to figure out what we could come up with in the way of a good design to be molded in plastic, for the growing 'Almost-Ready-to-Fly' market, we kept Herb's comments firmly in mind. We settled on the Aero Commander 100 as an ideal ship to be the first in Orv's new line of ARF airplanes. However, we decided to scale it down slightly, to make it more ideally suited for .09, .15, and .19 power, and hence, more appealing to the GG flyer. At 85% of the size of the original model, this gave us around 380 square inches of wing area, small enough to handle GG systems, yet large enough to take the new compact proportional systems and provide top performance with a .19 in the nose.

The results have been excellent, and Orv is now on the home stretch on the project. By the time this appears in print, the first production run should either be on the shelves in hobby shops, or on the way. So those of you who would rather fly than build can get your AC 100 in the air by simply going to the nearest hobby shop. Those of you who are die-hard balsa butchers, and still prefer to work with the traditional building materials, and like the smell of butyrate permeating your workshop, can simply put in your order to R/C Modeler for the plans, gather together all materials you will need, and sit back and wait for the postman to arrive.

I became interested in the AC 100 some time back, when it was still the Volaire. It began its life in Alquippa, Pennsyl-vania, as the Volaire 10. designed by Jock Gilbert', and certified as a 2-place aircraft in November of 1962. It was modified into a 4-place design and certified as the Vol- aire 10-A in June, 1965, and very shortly thereafter the entire assets of Volaire were acquired by Aero-Commander. Aero-Commander, in turn, became part of the Rockwell-Standard Corporation, and manufacturing of the 100 was moved to Albany, Georgia. where the Aero-Commander Division of Rockwell-Standard established a complete new facility for producing both the 100 and the 200, the latter being the former Meyers low-wing design which bears a slight resemblance to the Navion. Aero-Commander acquired all of the assets of Meyers Aircraft about the same time that it acquired Volaire. Since then, Rockwell-Standard has merged with North American Aviation, and the Albany works is now part of the Aero-Commander Division. North-American Rockwell Corp.

Upon acquiring the design from Volaire, Aero-Commander made a few minor design improvements to the ship, such as redesigning the wheel pants and the instrument panel, changing the wing tips, and adding a more streamlined rear cabin window to the ship. The latter not only improved the appearance considerably, but added an extra 2 mph to the cruising speed.

The Aero Commander 100 probably represents the most airplane for the money in today's private aircraft market. While there are other comparably-sized aircraft that offer higher performance, with more deluxe features and plusher interiors, they also carry a considerably higher price tag. When it comes to buying an honest-to-goodness basic airplane with excellent performance, with a payload of four people with baggage, the 100 can't be beat for sheer dollar value.

Of all-metal construction with fibreglass engine cowls, landing gear parts and wheel pants it is powered by a Lycoming 0-320, rated at 150 hp at 2700 rpm. This gives the ship a full load cruise of 128 mph at 75% power. Range is 560 miles with 45 minutes of fuel remaining. Take-off run is 750 feet, after which it climbs out at better than 850 feet per minute, with an operational ceiling of 13,000 feet. Landing speed is moderate, with stalling speed in clean configuration at 52 mph, and 48 mph with 35 flaps. Landing roll is only 650 feet. The wing features the 23012 airfoil, which gives a smooth stall, with fast, clean-break characteristics, and is fitted with flaps that can be set at 10, 20, and 30 degrees.

The 100 has a roomy cabin with big doors and can accommodate six-footers with ease. Cabin carpeting is in nylon. with a Royalite interior, and the ship conies equipped with hydraulic brakes on each main wheel, and an altimeter, air-speed indicator, magnetic compass, tachometer, stall wanting indicator, oil pressure gauge, oil temperature indicator, cylinder head temperature indicator, ammeter and left and right hand fuel tank gauges, all as standard equipment. All of this for only 8500 bucks! I expect that quite a few 100's will show up at private airports throughout the country during the next few years.

In the meantime, maybe a number of 100's will show up in 54-inch span, radio controlled versions at R/C flying sites throughout the country. That is, if many of you fellows out there get as much of a kick out of this ship as have those who hove built and flown it to date. You don't need to worry about power handling, as it has handled everything up to .40 size engines to date! Construction of the 100 is virtually identical to that of the Skyhawk, with the exception that many of the parts are shaped differently.

Wing construction is very simple, and it can be built in one piece, or in two pieces. joining the halves after completion and adding dihedral braces and gussets. Simply be certain that your center joints are well-glued, and strong; you may use epoxy here, if you wish. I prefer to build wings in one piece. You can do this by making a simple jig for it, or by propping up two flat boards at the correct dihedral angle, joining them at the center. Tabs shown on the ribs help keep things in proper alignment when building on flat boards. All sheeting and capstrips on the top of the wing are glued to place and allowed to dry thoroughly before remov-ing the assembly from the beard or jig. The tabs get cut off the ribs after this stage is completed, and the bottom sheet-ing and capstrips are then installed. Tips are solid blocks of light-weight balsa... 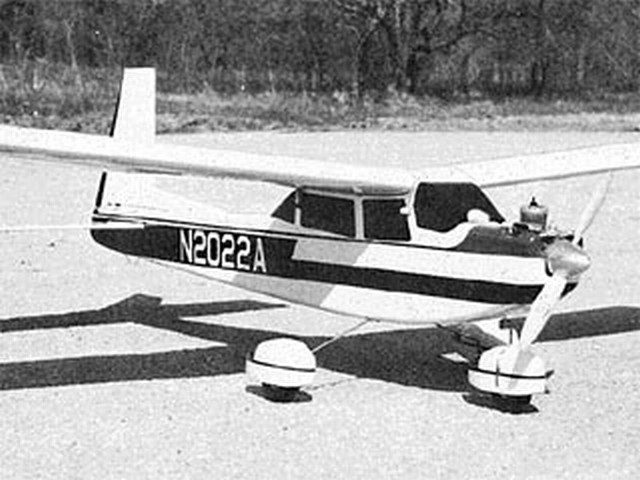