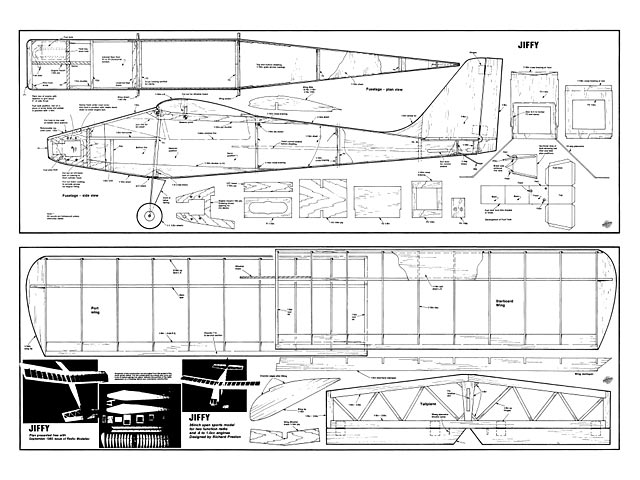 ABOUT 15 YEARS AGO I built a David Boddington designed Quest (oz1720) for a DC Merlin and single channel radio. Due to my inexperience the typical life of one of my small radio models in those days seemed to be just a couple of weeks so the poor little Quest didn't stand a fair chance to prove itself. Now that I am once again interested in the more 'back to basics' type of model, I decided to design a simple two channel model using the very same DC Merlin that I used all those years ago, so the Quest style was obviously going to form the basis of the design.

The model features conventional building methods and should not present any problems to anyone who has built a normal free flight model. The main ingredient for good performance is low weight so make sure that all the materials are carefully selected. The prototype weighed only 16 oz complete with radio gear using standard size servos and 225 Nicads. With the little Merlin turning a 6 x 4 propeller at full song a very respectable rate of climb is possible together with some basic aerobatics.

Construction starts by cutting out all the fuselage formers, fuselage sides and doublers. Cut the wing dowel holes in the ply doublers before cementing them to the left and right hand fuselage sides. Bind and epoxy the undercarriage wire to former F3 and allow to dry. Cement, formers F2 and F4 onto one fuselage side making sure that they are both square. When they are dry cement the other Fuselage side directly onto the formers, once again checking for squareness. The Ymin ply engine plate should now be eased into position through former F2 and epoxied. Former 2A can now be cemented into position against the rear face of the engine plate. Cement former F3 into position noting the angle. The false floor that forms the top of the battery compartment can now be positioned and cemented between formers F2 and F3 over the top of F2A.

Bring together the tailend and cement, holding it with a peg until dry. Carefully position and cement formers F5 and F6 between the two fuselage sides. Nose former Fl can now be cemented into position followed by the vertical fillets. Carefully cut out the left hand side engine cowling to suit whichever engine is to be fitted. The 1/16 in ply undercarriage brace should now be cemented into position between the undercarriage wires followed by the rest of the top and bottom fuselage sheeting. Leave the underside of the engine compartment clear as this helps cooling, aids priming and allows the oily exhaust film to drain away. The smaller items such as tail skid, top cowling, control snakes and wing dowels can now be added. Don't cement the wing dowels into position at this stage as the fuselage is easier to cover with them removed.

Make up a wing rib template from 1/32 ply and use it to cut out all the ribs noting that the root end ribs have a wider spar slot to allow for the diheral brace. Carefully cut out the main spars from good straight grained medium to hard balsa. Pin the right hand spar and trailing edge into position directly over the plan. Cement all the wing ribs into position noting that the root end rib is angled inwards towards the spar. Cement the leading edge into position and allow to dry, The wing tip sheeting can now be added. Carefully remove the wing from the plan. The left hand wing can now be built..." 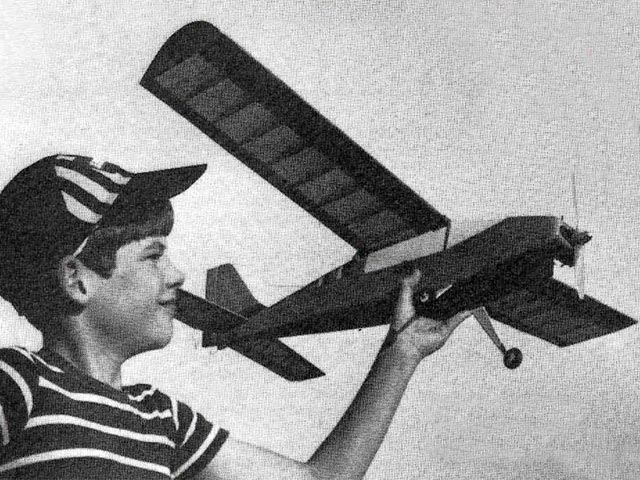