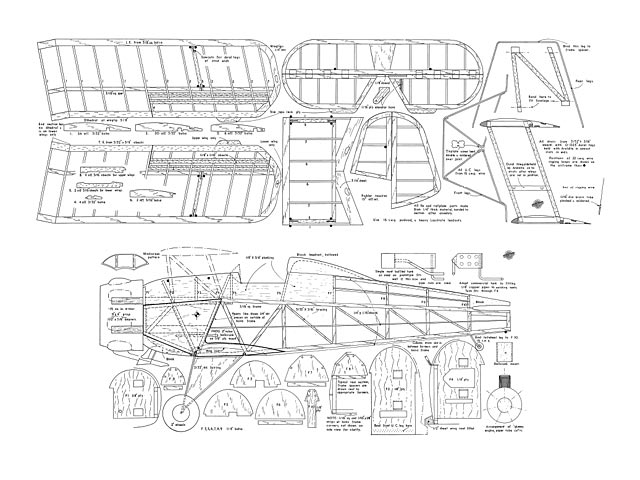 It may come as a surprise to control-liners of the build-it-in-concrete school, to see a design with virtually a F/F structure. It was an experiment which proved a success. In spite of a ham-fisted pilot, this little aircraft has come up smiling after impacts which would have dismembered some of its more rugged brethren. With a Veco 19 bringing the flying weight up to 24oz it respects the principle that a lighter model makes a lighter bang when it hits something.

The main structure is a box-shaped girder in 3/16 sq balsa, embodying the engine bearer unit which also carries the fuel tank, bellcrank and undercart. This provides most of the strength and gains more than might be expected from the lighter superficial layer, which makes the girder look like an aeroplane.

The wings are butt joined as they gain all the strength they need from the rigging, on which the model depends in the same way as the original machine. For this reason the wires are all pieces of stranded C/L wire, clipped with soldered brass tube into piano wire loops. There must be no doubt at all about the security of these vital loops, the technique recommended being to bind each loop to a piece of obechi and to cement it firmly in place, with just enough projecting to take the ends of the bracing wires. Biplanes are built so that the struts, as their name implies, hold the various components apart and the wires pull everything firmly on to the struts.

As very few modellers are watchmakers, it was obvious that the pushrod-elevator horn linkage must be external. In a contest model the loss of points on a few such concessions to practical necessity, are more than made up by the increased likelihood of completing the qualifying flights, the first requirement if the model is to come under the judge's scrutiny. The modeller who wants to win a contest can profit greatly from an evening's study of the SMAE. rules, noting which items are most worthy of attention. For instance, a cockpit crammed with bits is worth no more points than a scale prop, which is so. much easier to get perfect, is not required for the flying, but even so, is often neglected.

The original model was clear doped three times on the heavyweight Modelspan covering. All wooden parts were first covered in light-weight Modelspan and then given three coals of sanding sealer, with the usual rubbing down between coats. The pre-war German civil colours were sprayed on with the aid of stencils cut from Fablon, before finally fuel proofing. Gayer colour schemes have appeared in recent years on acrobatic mounts, but some Jungmeisters currently flying have rear upper fuselage modifications.

The dural tipped struts were made to fit into hidden slots, so that the finishing and fuel-proofing could be completed before attaching the upper wing, otherwise spraying is a night-mare. When everything is dry, the model should have all the struts inserted and then the wing put into place. The Araldite adhesive used to hold the struts allows plenty of time for checking the wing alignment and the elimination of warps, but be prepared to tape card spacers on temporarily, to prevent struts popping out before the joints are fully set.

Although the airframe is straightforward, the cowling is unusual as there are better ways of making it than by wrapping thin balsa sheet round delicate formers The section is circular so, for the original, three pieces of aluminium sheet were cut and bent to cover 120 deg each. Their shape allowed for the taper from front to rear and the compound curve was beaten over a hollow carved in an oak block. The three cowl sections were assembled using Araldite with strips of glass-cloth on the inside and the seven blisters, which were moulded individually in fibreglass, Araldited in place.

As an alternative to panel beating, a turned block can have a fibreglass cowling moulded on it in one piece..." 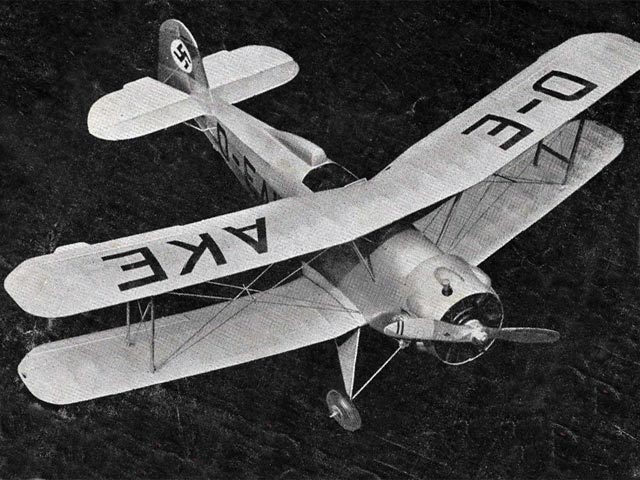