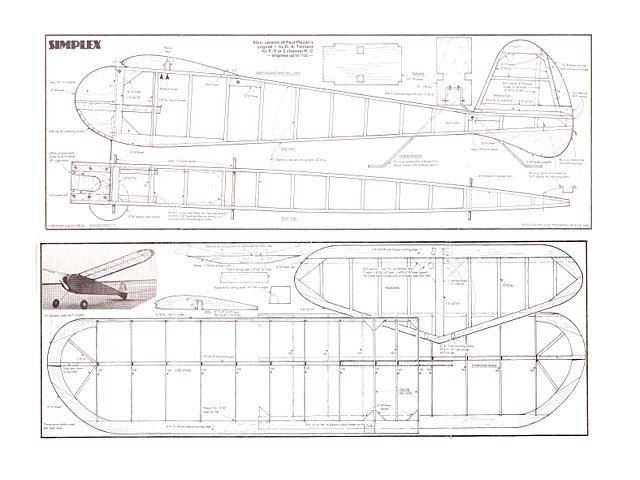 Simplex. Free flight gas model. A later, 40in wingspan version of the original Paul Plecan design, for 2 channel RC, engines up to 1cc.

First published in Air Trails of September 1941, Paul Plecan's Simplex (oz3073) set many remarkable standards which were little appreciated at the time. The original 5ft model appeared to British eyes as a skimpy, unrealistic typically American lightweight box car; but it was far from being that. For a start, Paul built the original far an equivalent cost in muterials of 50p or $2.50) - in those good old days when the pound was the equivalent of five dollars - add a seven dollar engine and $1.25 timer and you Had a complete 'gas job,' ready to fly for an investment of just aver £2!

Paul used a Sky Chief on his prototype, added the pull out battery tray arrangement with knack off motor mount bulkhead and by his eleventh flight he had the first out of sight of 33 mins from 15 sec engine run.

In times of stringency, when Brits were banned from flying power models and more used to bulkier, heavier cabin designs, Simplex came as a breath of fresh air and there must have been hundreds of expatriate aeromodellers from the old country displaced through the Commonwealth Air Training Scheme to Canada, Rhodesia, South Africa and the USA who cut their teeth on Bantam and O&R powered 'Simplexii'. They all found that Paul's model was just the job to tuck under thr barrack room bed between sessions of air training. So it is no wonder that 'Simplex' should re-emerge in fond reminiscence among the membership of SAM. Douglas Tennant has a clutch of them including this 40in, version for the Mills .75 diesel and at only 11oz all up it is naturally a spritely performer. Over to Douglas for his description..." 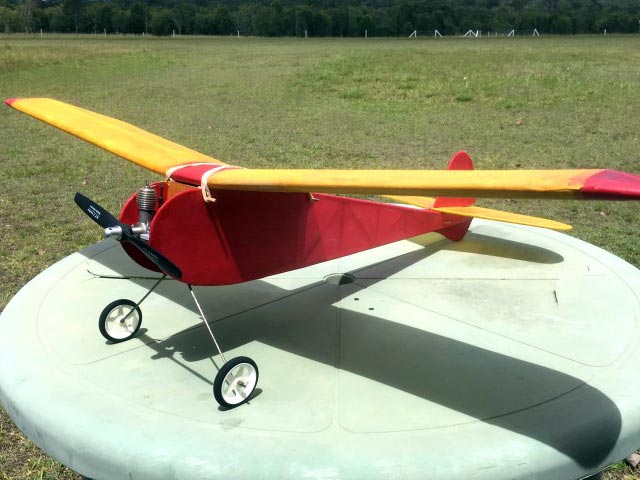 Hi Steve, A couple of years back - 2010 to be exact ... a challenge was made to our RC Flying Club. The challenge was to build a Vintage Model & make it RC assisted if need be & to prepare for a 'Vintage Fly-in' which was to be held at our club. I decided to build the SIMPLEX as per your plan No.77. Once again I had the original plan in hand and the results are shown in the attached photos [see more pics 004 - 007] Credit: Bernard & Petro Odendaal. My Simplex initially flew with a 1964 PET OS (.099) which I reconditioned and she flew like a dream - the only problem being the absence of a throttle.... I subsequently installed a Brushless EP setup. My Simplex still flies frequently and I want to encourage anyone reading this to build yourself one of these delightful little Vintage Models. Kind regards,
BernardandPetro - 19/07/2014
Add a comment