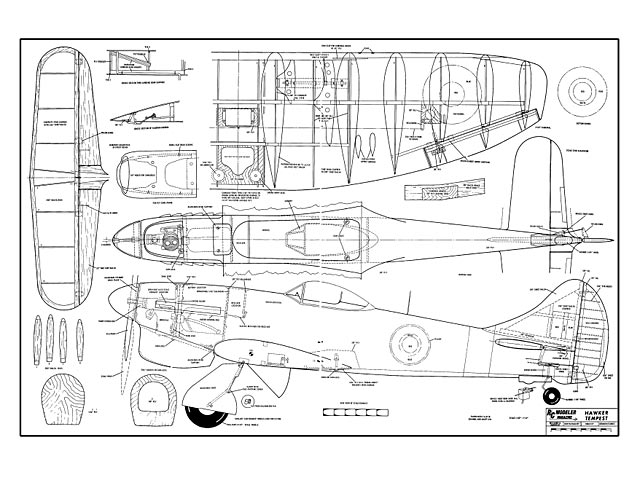 Quote: "The Hawker Tempest marked the end of the second era for a thoroughbred breed of aircraft. Harry Hawker had been there in the beginning of the 'Age of Flight' at the turn of the century. He had helped Sopwith produce the Camel that proved to be one of the most important fighters in the first war in the air. From the Camel, Sopwith had developed the Snipe, which has been described as the best single-seater scout of the Allied air forces. However, the Snipe was in active service for only a few months before 1918.

Harry G. Hawker is not often associated with those early years, but his pilot's license number 297 attests to his pioneering. Before 1914 he bad joined Sopwith after leaving his native Australia. He and T.O.M. Sopwith worked together in the construction of many famous Sopwith airplanes. There was a striking parallel in the second era. Hawker produced the Hurricane, which, like the Camel, proved to be one of the most outstanding aircraft in the second war in the air.

As the Snipe was the final war-time evolution from the Camel, so was the Tempest the final wartime descendant of the Hurricane. It was the last, and probably the ultimate medium and low-level piston-driven aircraft of World War II. Sir Sidney Comm, the chief designer for Hawker had developed it as a replacement for the Hurricane - hero of the Battle of Britain - and the Typhoon.

The prototype Tempest flew in September 1942, and exceeded 477 mph. In June 1944, Tempest V's made contact with enemy aircraft for the first time, and destroyed three ME109G fighters without loss of their own.

To the end of the war the Tempest was the fastest medium-altitude fighter in production, other than the Gloster Meteor and Me262 jets, and the rocket ME263. In fact when the Meteor was first put into service the Tempest could actually overtake it. Tempests destroyed twenty Me262's, and 638 ram jet 'Buzz bombs' in addition to assorted aircraft, boats, and ground targets, according to official records. This spectacular performance was made possible by the 24-cylinder Napier Sabre engine which developed from 2,400 to 3,055 brake horsepower. With a span of 41 feet, this 7-ton aircraft had an initial rate of climb of 4,700 feet a minute from level flight. It had an official speed of 435 mph at 17,000 feet. At 4,600 feet it would do 416 mph. An interesting thought for unlimited pylon!

I must admit that the powerful, fast look of the Typhoon and Tempest has intrigued me since the first day I saw one. In 1943 when we arrived in Bournemouth with the RCAF, these aircraft would fill us with envy by 'shooting up' the new arrivals. After skimming the wave tops they would fly right into the town park from the sea, then pull up to a vertical roll, and disappear in a dot overhead - well over 10,000 feet in less than 3 minutes!

The Tempest easily lends itself to a scale radio-controlled model. It has a wide-track undercarriage, and the large diameter wheels help on our rough flying field north of Toronto. It has a longer nose moment than the Typhoon. The cowl gives ample protection for an inverted engine. I did feel it necessary to increase the area of the stabilizer.

It was a pleasant surprise to find that the model needed no trim adjustment and on the first couple of flights it wheeled in as smooth as a kitten's wrist. Some of my subsequent flights were not so uneventful. but she's still in one piece.

Construction. The Wing: The construction was not unusual excepting the flat center panel and elliptical shape. Note the break-away feature for cam-locks. The center panel was of heavier build than may be necessary. It supports the main undercart which has to be rugged when I am landing. The Top-Flite type of torsion-bar gear was used and all hardwood parts were epoxied or white glued for strength. Be sure the center section is built flat. The outer panels, however, should be jigged for W washout at the tips, ie negative incidence, to pre-vent tip-stall. The wing tip blocks are large and should be hollowed.

When joining the three sections, trim the outer ones to give 3W dihedral at each tip. Be sure the incidence is the same on both sides. The entire wing is sheeted with 3/32 balsa. Strips of 1/8 square balsa were glued inside the leading edge as shown in the photograph. They supported the sheeting at the front of the wing. The center section, and section joints were covered with fiberglass and resin with a double layer where the fuselage meets the wing. Fiberglassing can be done without showing by using the fine grade of cloth from Sig. When smoothed, the wing should be silked and doped. Ailerons were built integrally with the wing and cut out with an X-acto saw after sheeting, then fitted and covered with the wing.

The Empennage: The stab and rudder are straightforward. After the covered stab has been inserted and epoxied into the hole in the fuselage, the elevator is attached and the trailing edge added. The fillets can be finished with polyester putty. Nylon hinges are pinned in with sharpened tooth-picks and flush finished. The rudder post was extended to the bottom of the fuselage for strength and as a support for the nylon hinge.

The Fuselage: The fuselage, spinner, and chin radiator cowl were made of fiber-glass as described in the February 1966 issue of RCM. All joining was done with commercial epoxy adhesive (available in pints) or the faster hardening Hobby-poxy glue. The motor and firewall were positioned by screwing the motor to its Tatone mount and mounting the prop shaft through the center of a metal disc (the disc was also used to align the fuselage halves when they were being joined) before putting the motor into the fuselage. This disc was then screwed to the front of the fuselage (which was the same diameter). By doing this the motor and mount were suspended within the fuselage in precisely the right location..." 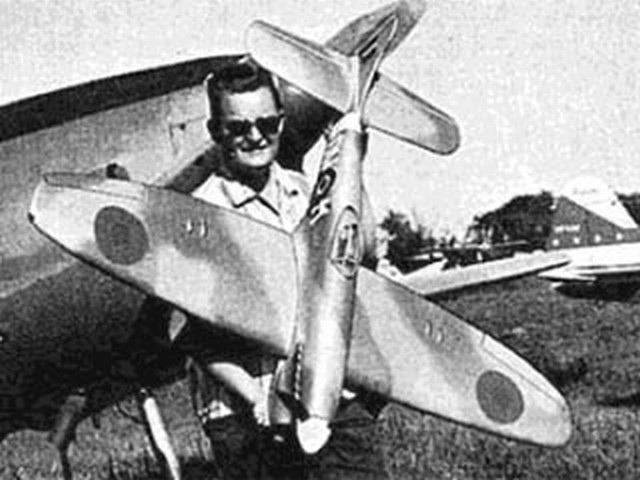