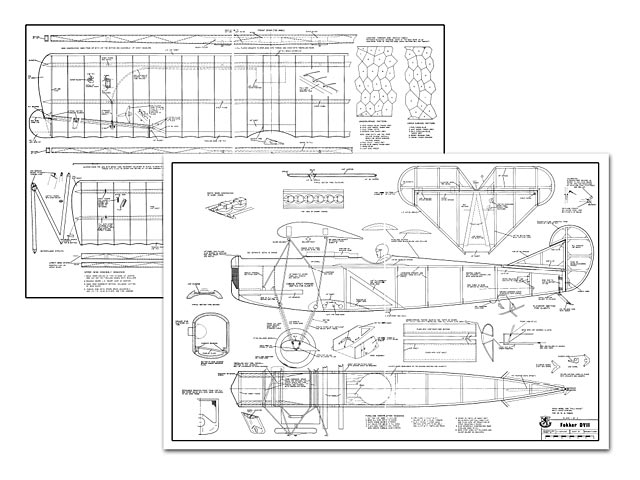 Quote: "The first in a series of antique scale aircraft construction articles to be presented by RCM. A practical flying scale model, with an emphasis on the flying, the Fokker has an impressive array of contest wins. Norman Butcher's Fokker DVII.

What is a scale model? This is one of the most difficult of all questions to determine. I've seen models which vary from starkly practical flying machines, which are admittedly recognizable as the prototype aircraft, to super-detailed masterpieces which, on close examination, turn out to be just as much a caricature. Yet each, for contest pur-poses, classifly as a scale model along with machines which really deserve the title. I think the answer to the question can only lie with the individual, and if he is satisfied with his creation, then who dares criticize it unless, of course he subjects it to the scrutiny of others by entering contests. This certainly sorts the scale from the semi-scale with the allocation of authenticity points, although the final results usually em-phasize the flying ability of the model as well. And why not? It is, after all, FLYING scale!

It was with contest flying in mind that I embarked on this D VII. I love building and flying models for pleasure, but this enjoyment is greatly enhanced by entering contests. Now the D.VII is a superb contest choice, but this was not primarily what convinced me to build it. After all, there are many aircraft which can offer equal, or better, contest chances, but the D. VII has always intrigued me.

In fact, this is the fourth D.VII I have built and I hope I've now have this particular model out of my system for a few years! To qualify the 'fourth' part, I should say that the first two were control-line and, although they won the first two scale aerobatic events held in Great Britain, they were, by present day standards, travesties of a scale model. The third D.VII was the 'prototype' of the present machine, but with flat-bottomed wings, sheeted construction, and so on - equally a travesty and, at 10-1/2 lb with an O.S. 50, it didn't fly too well either! However, it taught me many things and guaranteed, in advance, the success of number four.

Before embarking on the present version I took a hard look at the objects I wished to achieve:

Now, if one studies the FAI rules, it will be seen that although one CAN win purely on flying, or on fidelity, but this presupposes the absence of a model which combines reasonable authenticity with reasonable flight performance. I am not a 'rivet counting' scale modeler who delights in intricate cockpit details, and so on, but I do insist on authenticity where it really shows - in such matters as wing sections, incidences, control linkages and so on, and it will be seen that attention to these aspects can gain (or lose) as many points as a fully detailed cockpit, for example.

As I built it then, this D. VII is a compromise aimed at good flying and authenticity, to gain high overall con-test marks. If to this were added plenty of authentic details, such as is the delight of many scale modelers, then it could be formidable indeed. However, let us consider a further point, which is, that the more time and effort one puts into a model, the more reluctant one is to chance it off the ground. I know some modelers to who it seems an imposition that they should actually have to FLY their models at each com-petition. Yet, to me, this is the fun of it. If I didn't think I was really going to enjoy flying a particular model, I wouldn't start building it in the first place.

There you have my philosophy of scale modeling. I don't expect everyone to agree. indeed I hope they don't, because I would then cease to learn from more experienced scale modelers, but it has brought me contest success, albeit totally unexpected. When I completed this model for our Nationals, I antici-pated a 5th place if I was lucky, because I knew there would be many better scale models present. What I did not anticipate was that my compromise of a good flying score, with rather above-average authenticity and workmanship points, would consistently result in a total winning score. For the record. the D. VII won our Nationals and All Scale Meeting - the biggest events of the year and also made two other firsts, a second, and third, in National contests.

CONSTRUCTION Now let us consider the model itself. No, don't switch off, I'm not going to tell you how to build it - if you can't do that, from these admittedly rather stark drawings, go and learn the basic techniques on something simple, and by that time, you will also have learned to fly! Seriously though, the drawings tell enough for any reasonably compe-tent builder to complete the basic structure, after which you are on your own for details. These varied extensively between different aircraft, so get them form a reliable reading source.

The first point to consider is the engine installation. In Great Britain we have to use a silencer, so I either had to make up an elaborate manifold to suit the most commen type of Mercedes exhaust, or else take the easy way out by copying the aircraft which had the exhaust venting halfway down the fuselage. Guess which I chose...."

Update 18/10/2019: Added supplementary article (this is from Radio Modeller December 1967, so is earlier than the RCM article) thanks to RFJ. 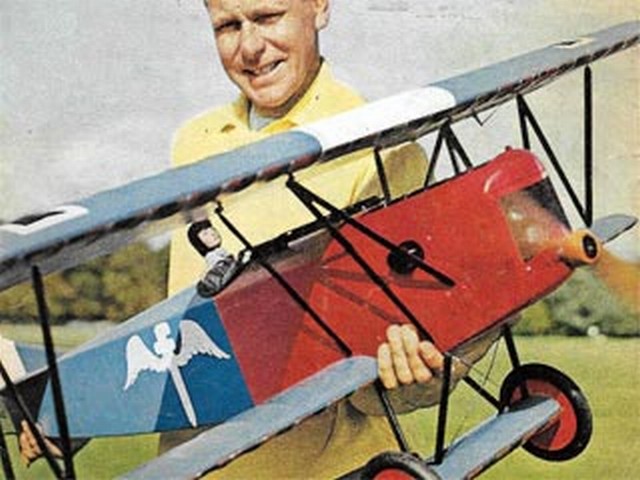