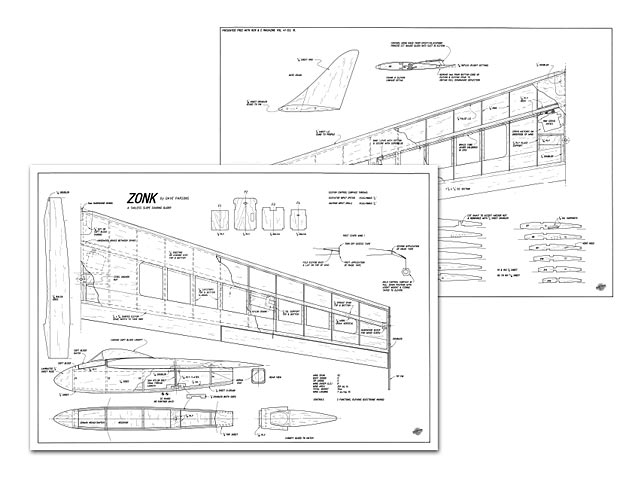 ZONK! by Dave Parsons, from RCM&E Volume 41 Issue 10. Slope Soarer model with 50in wingspan and is made up of all balsa ply built up construction. It is for 2 function radio control. AUW 17oz. Wing Loading 7oz/sq ft.

Quote: "The date: Friday 29 May 97. The place: 'Abernant'. Those present. Me, a slope soarer called Zonk and more seagulls than l could count. The thermal was a real 'boomer' and I was flying the Zonk into a south-easterly breeze above the black heat-absorbing surface of an old colliery landscaped into a large flat area. The icing on this pilots cake was a rubbish tip further up the valley - hence the seagulls, the best thermal indicator you could ever wish for. At a height of up to 1,000 feet it was difficult to pick out the small glider despite bright transparent yellow wings, only the occasional glint and flash of the sun reflected off the shiny Solarfilm allowing me to pick it out from the crowd, lucky they were all in white!

By this time Zonk was a good way back behind the ridge and gaining height at an alarming rate. Looking up into the clear blue sky with no reference to any clouds, l was getting vertigo. Time to lose height and get back to normality. Easier said than done! I managed to focus my burning eyeballs and get it facing back into wind. towards me. Some foiward pressure on the elevator stick got things moving. Bloody hell. it don‘t half shift! l could hear it whistling even at that great height. Ease back on the stick and we're up into a gi-normous loop! That‘s the trouble with 'flying wings' and their reflexed trailing edge wing section, the faster they go the more they want to go up. l bet Concord has it cracked.

The Zonk is fast, aerobatic, can be flown very precisely and doesn't need a gale to stay up. lt's compact and light with a corresponding low landing speed. With its fighter like, scale-ish front end the C G came out at exactly 15% mean aerodynamic cord - honest! With 1/4 in up elevon reflex. stable flight is achieved, though a little speed dependent - recommended!

Sticking a couple of ounces of lead up its rear orifice (tailpipe) moved the CG back to 18% MAC, and gave a flatter and faster glide attitude with a little less reflex to the elevons, this is OK and suits my kind of flying. With a little more lead up the tail pipe and the CG now at 20% MAC, l ran into a flat stall and no control response at low speed. Dodgy!

What's in a Name? l built the first Zonk flying wing quite a few years back, which was slightly smaller than this one, and used standard radio gear giving a higher wing loading. The CG was calculated, measured and was found to be slightly forward. No one likes to add lead and a forward CG is usually safe, after all. So, on went the walking boots and l headed up the mountain for a test flight. Remember the advice of making the first test flight over long grass? l was lucky as there was soft earth as well! With a good firm chuck into the fresh breeze. and before l could get my hand down to the elevator stick, it went Z-O-N-K, nose down, into the ground, up to the wing roots just ten feet in front of me! Thinks! l'll try again with the CG a bit further back and a little more reflex. l did and it flew OK - quite an anticlimax.

The fuselage is easy to build with 1/16 balsa sides and an 1/8 bottom. A 1/16 doubler at the top with 1/8 square bottom corners allows for some energetic sanding. Formers F1 and F2 are cut from 1/8 ply to give a good gluing area and strength. especially F2 which retains the wing, together with a 5 mm nylon bolt at the rear, which is screwed in from underneath and up into the captive nut in the wing. The 1/16 ply plates take the load and locate the wing.

Glue together some thick block balsa to make up the nose. The NiCad hatch can be sanded to shape in situ with the wing fairing, and painted to simulate cockpit windows Alternatively, carve some block to make up a fighter-like cockpit as I did. l think the extra effort is worthwhile. Former F3 retains the receiver and prevents crushing..." 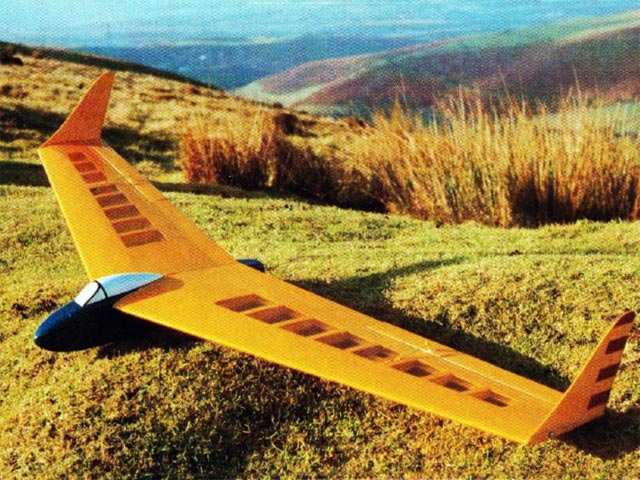