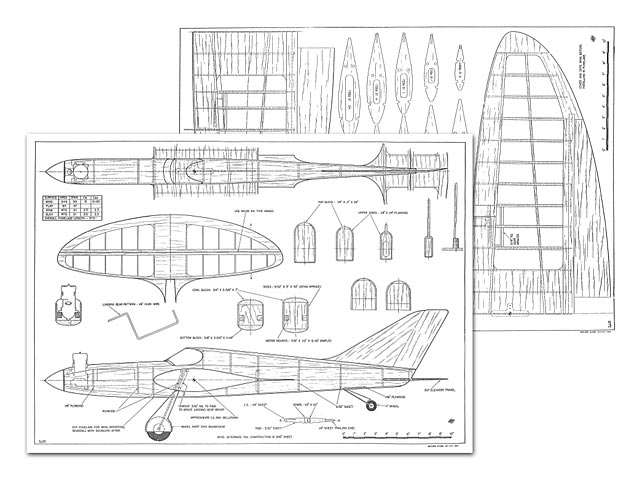 The Skylark represents the second in a series of original stunt models designed to achieve improved stuntability without sacrificing stability or appearance. It is identical to its predecessor, the Wingmaster, in its aerodynamic configuration, although radically different in outward appearance. The Wingmaster was designed to test some ideas on airfoils, moments, and such; the Skylark was intended to utilize the results of those tests in a more aesthetically pleasing airframe. Credit for the end-product must be shared with other members of the Aerodynamics Section of Grumman Aircraft who contributed suggestions and criticisms throughout the design, construction, and flight-test stages of the design.

Although outwardly of conventional appearance by current stunt-model standards, the Skylark incorporates two fairly unique features. The first of these is the NACA 64021 airfoil (slightly modified) which was chosen because of its gradual stall characteristics, and the other is our practice of keeping both wing and tail chord-lines on the thrustline in order to minimize flying characteristic variance between upright and inverted flight maneuvers.

One final comment before getting into the construction details: it has been our experience that the ratio of movement between flaps and elevators can be critical in determining the flying characteristics of a given model. Hence, we recommend an access hatch in the vicinity of the flap horn (the elevator horn is accessible through the open aft end of the fuselage). On the original, test flying began with a ratio of one degree of flap deflection to each degree of elevator deflection. This arrangement yielded an airplane of only marginally acceptable flying qualities, so we began experimenting with the flap-elevator ratio in an effort to improve performance. Increased elevator-to-flap deflection worsened the performance whereas increasing the flap deflection relative to the elevator deflection proved quite effective and the Skylark has been flown ever since with two degrees of flap travel for each degree of elevator movement. This is an unusual arrangement, we know, but it works very well in this case. Naturally, the proper ratio for a specific stunt model (be it this design or otherwise) can only be determined by test flying. We suggest starting with a one-to-one ratio on all models and leaving yourself room (access) to experiment to your heart's content until thoroughly, satisfied that you have the best possible arrangement for your particular model design.

Begin construction by cutting out all wing ribs and notching the trailing edge at the proper spacing to receive the ribs. Now cement ribs A-1 through H in place. The next step is to install the forward and aft wing spars which should be spliced and cemented into one piece at the wing center. It is critical at this point, prior to attaching spars in place..." 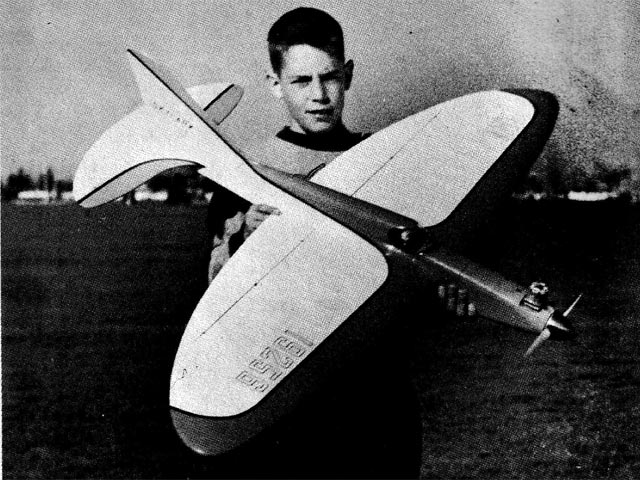