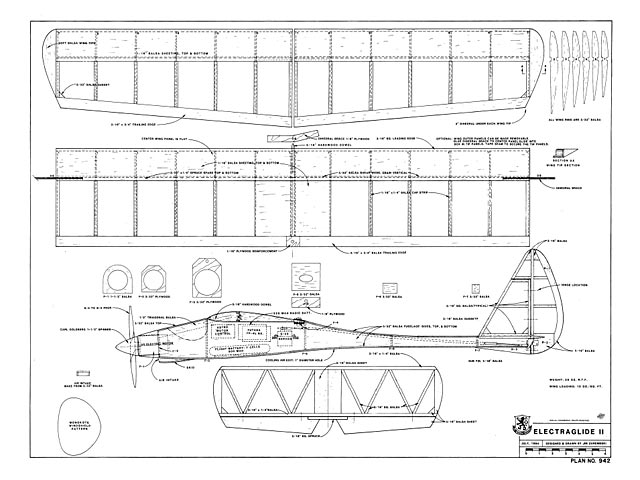 Quote: "Editor's Note: The original Electraglide 62 we flew in 1975 was one of the nicest powered sailplanes we had seen up to that time. The modernized Electraglide II far surpasses the original in all categories. It is easy to build, very easy to fly, and has a majestic glide that is hard to believe. And, best of all, you don't need expensive flight systems to fly it. Any of the 05 systems work very well. The RCM Electraglide II is a fun to fly sport sailplane that'll do 15-20 minutes in still air and thermal with the best of them. The Electraglide II is destined to be a classic! Electraglide II, by Jim Zarembski.

The Electraglide 62 (oz5272) was the first model aircraft article and plans that I had published in RCM in 1975. This model was built for the then new Astro 05 when it was first introduced in 1974. At that time all of us in the electric powered arena felt that we needed high lift airfoils because of the excessive weight of the flight batteries. I, therefore, chose the NACA 4412 airfoil for the original Electraglide. With a Cox Grey 613 prop, those old blue backed Astro 05s turned about 14,000 rpm with 8 cells rated at 550 mAh. The Electraglide would climb very nicely on this power which lasted about 4 minutes and ultimately had a flight time of 6 to 8 minutes.

Over the past 10 years there have been significant improvements in the design of electric power systems. The Astro or Leisure 05s available today turn larger props at higher rpm for a far longer duration of power. In early 1984 the new Sanyo 800 mAh batteries began to appear on the dealers shelves. A 7 cell pack of 800s weighs in at a mere 8.6 oz compared to 13.0 oz for the 1,200 mAh cells that have been in great use in the past few years.

We've also learned which airfoils work well in conjunction with Silent Power. Therefore, I wanted to take the old Electraglide 62 and redesign it as an electric powered sailplane for the mid-nineteen eighties. It would be designed for all of the 05 motors available today with either 7 cells of 800s or 6 cells of 1,200s. It would be designed for the sport sailplane enthusiast, not the contest oriented flier. The original idea in early 1984 was to use the same wing and stab as the original model with an Eppler 205 airfoil instead of the 4412. Because of reductions in the size of radios the fuselage could be reduced in size. Hence, the first versions of a new Electraglide sported a straight dihedral wing with a small streamlined fuselage and was very similar to the original Electra-glide 62. The first model was flown in June 1984 using an Astro Cobalt 05 for power.

It was immediately apparent that there was more than enough power to climb this ship at fantastic rates of climb. In fact, almost full down elevator was required to keep the model from ballooning. The glide was not really what I expected. It simply was not up to the caliber of performance for models like the Electricus that I had been flying for the past two years. Another major problem was that this model did not respond well to rudder, especially when flying with the wind. I also broke the wing of the second prototype trying to dive out of a thermal. This version had spruce spars top and bottom with 1/16 balsa sheeting from the leading edge to the spar. Shear webs were used but there was no bottom sheeting in an attempt to save weight. The result was wing flutter and a basket case. I'll always use the old D spar technique in the future on sailplanes.

Back to the drawing board. The model would be redesigned with a larger wing, 72 instead of 62 inches. The rudder would be enlarged and additional downthrust would be added so that a modeler could climb and glide with the same elevator trim. Additional design features include a lifting fuselage which is designed to be as drag free and lightweight as possible. This was accomplished by designing hatches out of the model. The motor, for example, would be able to be inserted from the rear radio compartment through a large hole in the fuselage former at the leading edge of the wing. From the first two prototypes it was determined that no other equipment had to be placed in the forward compartment to achieve balance.

The wing would be redesigned to use tip dihedral with a flat center section. This would be easier to build and lighter and stronger because additional dihedral braces and strengthening would be avoided. The wing tips were tapered to beautify the ship. A new version of the Electraglide II was built in a few weekend marathon building sessions. How would it perform?

A trusty Astro Cobalt 05 was inserted from the inside of the radio compartment and a brand new 7 cell pack of 800 mAh Sanyo's was servo taped to the floor of the radio compartment. I installed a new Futaba FP-4L radio with two of the new S-33 servos for rudder and elevator control. An Astro Electronic Motor Control was used for motor on and off control. This unit was selected because it has a motor short feature that stops the prop when the motor is turned off. A free wheeling prop is like gliding with a paper plate nailed to the front of your ship. To keep the weight down, a 225 mAh pack was used. With all of this gear neatly tucked in place, the Electraglide II tipped the scales at 35 oz. for a wing loading of 10 oz./sq. ft. I was all ready for the test flight, the day of judgment.

An old Cox Grey 7 x 3-1/2 propeller was bolted to the motor inside a Goldberg 1-1/2 in spinner and all of those completed model photographs were taken and quickly developed in a one hour processing center. (It's best not to take any chances.) The radio and flight systems were all charged up and a small group of youngsters traveled with me to a large park in my native Perrysburg, Ohio. I knew the model would climb but would it turn properly? I'd take no chances, I'd first test glide the model over long grass. Remember that instruction from the old days?

I ran into a light breeze and tossed the Electraglide on the test glide. It drifted to the left so I corrected with right rudder and it didn't respond. In fact, it spiraled into the turf and was tossed from wing tip to wing tip. I was mad! About ready to give up. I checked the model out and found no visible damage. The radio worked fine but - I couldn't believe it! I had the rudder hooked up backwards. The new Futaba FP-4L has servo reversing micro switches built into the transmitter. I had used it on another model and forgot to recheck at the
field. A flick of the switch and another test glide was attempted. This time the Electraglide II flew flawlessly. I launched with the Cobalt 05 screaming and climbed for about a minute. I had a total of four motor runs of over a minute and a total flight duration of 14 minutes and 17 seconds. The glide was spectacular and this model responded very well to rudder commands. The elevator was set at dead neutral trim for both the climb and the glide. From mad to ecstatic in a 20 minute period. This is what model aviation is all about.

Over the past few months I've flown the Electraglide II with Leisure and Astro ferrite motors with either seven small or six large cells. Flight duration in still air is about 17 minutes with the small cells and 22-24 minutes with the 1,200 mAh cells. The Electraglide II is easy to fly and easy to thermal. With the streamlined fuselage and the Eppler 205 it also handles the wind very nicely despite its light wing loading. I hope you're interested enough by this time to consider building this model. It's also very easy to build..." 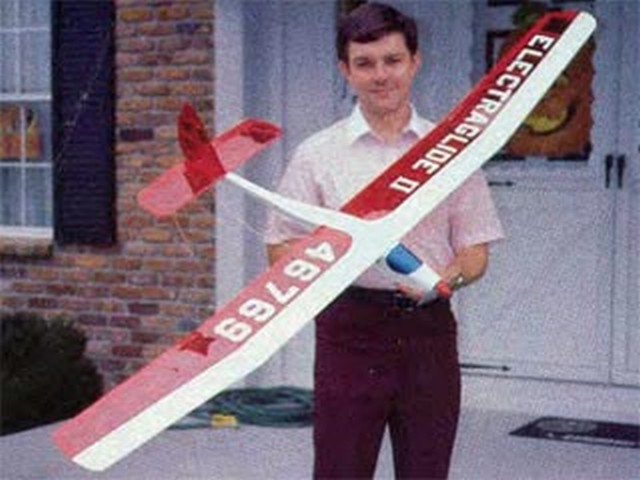