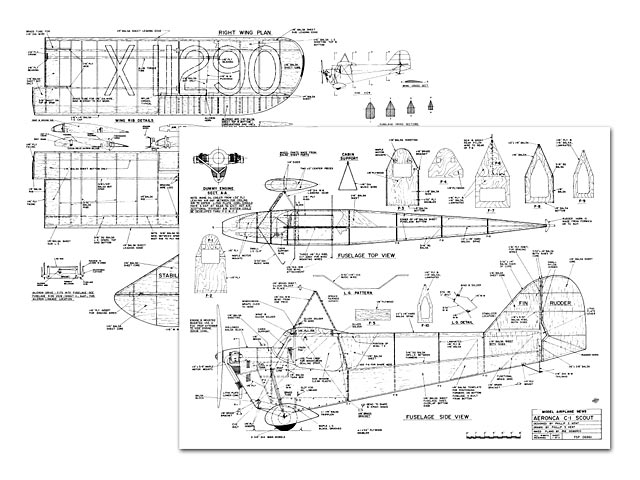 IN 1931, the Aeronca company was looking at ways to extend its range of aircraft. Several new designs were considered, one of them being the C-1 Scout - a development of the original C-2.

The Scout was designed as a racing and acrobatic mount, with the sport pilot in mind. The wingspan was reduced to 29 feet, 4 inches, and the airframe was strengthened to what was to become the C-3 standard. This modification entailed using steel tubes of a heavier gauge for the fuselage, increasing the size of the flying wires and reducing the dihedral angle to 2 degrees. The wing structure was also strengthened; the aircraft was capable of withstanding 8.5 G. Thanks to the reduced span, the roll rate was improved, but land-ing speed went up to 40mph.

The first C-1 was completed in March 1931 and test-flown by Al Bower. This aircraft - X11290 - was painted in an eye-catching color scheme of vermilion with a maroon nose area, a stripe and pants. On the fuselage, a black pinstripe separated the two main colors; the registration letter and numbers were in black, and a standard Aeronca A engine was installed (it had been developed for the C-3).

DEVELOPING THE C-1: My first Aeronca was a 100 version built from the excellent Dennis Bryant plans. The idea for the C-1 came from a desire to build a light scale model for my 0.S.* .26 4-stroke. I thought a 1/6-scale version of the C-2, C-3, or 100 would be too big, but I remembered seeing a photograph of a clipped-wing acrobatic C-1 Scout. That machine looked ideal; it had a bright color scheme and came out at just about a 58-inch wingspan at 1/6 scale.

As usual, there was a small problem: no 3-view drawings! Because I wanted the model for competitions, I decided to draw my own. The only differences between the C-1 and last C-2s were in the shape of the fin and rudder, the wingspan (it was shorter) and wheel pants. Using all the available infor-mation, I soon had the 3-view drawn and was able to start the model drawings.

In outline, the model accurately matches my drawings, and with care, it could be built to a high standard. The lack of photographs of the full-size plane could be a limiting factor, though.

I also think that the model could be modified into a C-2 version without too much difficulty. There aren't really any difficult areas for the builder, but wire must be bent accurately, and the wing mount must be silver-soldered. Another slightly unusual feature is the use of an aileron servo mounted in the fuselage. Using the small servos that are available these days, it would be possible to mount a servo in the wing using the more usual bellcrank-and-pushrod method.

CONSTRUCTION: I like to build the tailplane first, because it allows me to see a piece of the finished structure! In the case of the .prototype, all the tail surfaces were built using the sheet-core method. There's no balance problem, so if you prefer a more simple method, you could use lightweight, firm 3/16- or 1/4-inch sheet-balsa tail surfaces.

The 1/16-inch sheet-balsa cores are first cut to outline shape. Before you cement the ribs and spars into place, be sure to mark their positions on both sides of the core. On completion, sand the tail surfaces to the correct cross-section - a rounded leading edge on the tailplane and fin and a triangular elevator and rudder. Don't forget to add the 1/16-inch ply inserts for the bracing wires and also the balsa in-fills for the hinges and horn. I made the elevator joiner and horn by silver-soldering together 16-gauge wire and 18-gauge steel, but you could use a commercial horn.

Fuselage: The fuselage is made a little differently. Cut the 1/8-inch sheet-balsa bottom to shape, and place it over the plan top view. Then glue on the formers, making sure that they are at the correct angle (use the template shown on the side view to help here). When dry, glue the 1/16-inch sheet-balsa sides into place; some scrap wood strips and pins will hold them in place (see photograph).

Build a sub-assembly using formers F1, 2 and 3 and the engine bearers. This unit can be added to the partly assembled fuselage before the fuse is removed from the building board. Use epoxy to glue the sub-assembly into place and masking tape and pins to hold until the epoxy is dry. The top spine completes the basic fuselage structure. Make the wing-mount framework out of 16-gauge wire, silver-soldering the joints. The brass brackets for the wing wires should be silver-soldered, but the horizontal wire wings should be soft-soldered. The mount should be sewn to the plywood former F4T before the balsa-laminated ribs are glued onto it. Trial-fit and then install the former; fasten the front wire to the engine bearers with small brass or plastic brackets. Build up the center-section structure on the wire framework..."

Quote: "Steve & Mary - Here's the plan and article of Phillip Kent's 61in span Aeronca C-1 Scout from June 1996 Model Airplane News. He used a .26ci four-stroke (that'd be my choice), but would make a nice electric, also. In the text he says 1:6 scale and 58in span, which would match the full-scale's 29' span, but using the 6in scale on the plans the span measures about 60.8in when you include the center section. The article's specifications box says 61-1/2in. Regardless, it's a good looking model! DPlumpe." 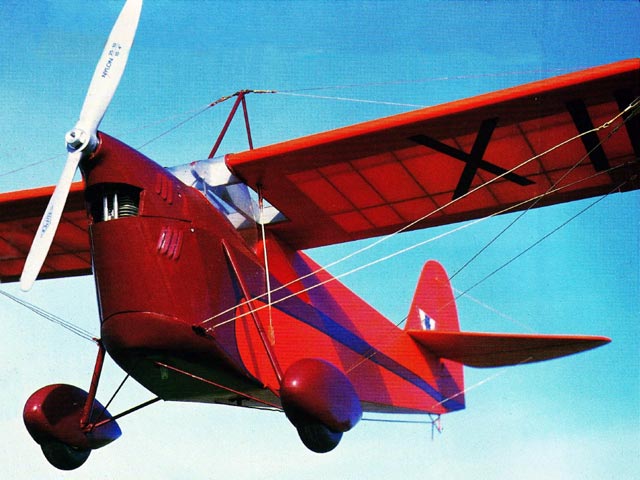