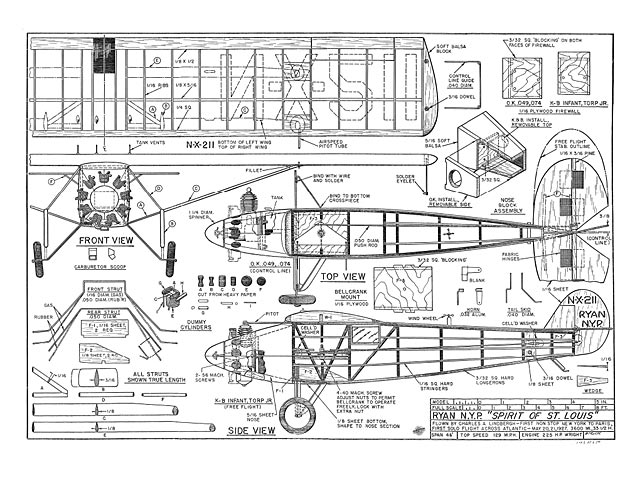 Quote: "How can you pass up this one? One of history's most famous planes as a control liner or free fighter. Ryan NYP Spirit of St Louis, by Henry Struck.

THE epic transatlantic solo flight of Charles A Lindbergh stands to this day as the most inspiring and dramatic achievement in the spectacular history of aviation. On May 12, 1927, then a virtually unknown young airman, he set down his silver ship at Curtiss Field, Long Island, to complete a one-stop jaunt across the continent and calmly announced his intention to fly on to Paris! Quickly he hopped his ship to nearby Roosevelt Field where Clarence Chamberlin and Commander Byrd were preparing their craft for the same test.

Early on the morning of May 20, 'Lindy' eased his long frame into the tiny cabin and lifted the heavily loaded ship from the soggy field in an almost incredible take-off. Barely clearing high-tension lines at the edge of the field, he disappeared into the mists. Twelve hours later he was over St John's, Newfoundland, the 'jump-ing off place' for the journey across the sea. Fighting blindly through fog banks, now skimming at wave-top heights to escape icing, again climbing to 10,000 feet to top rain squalls, he finally emerged into clearer weather near the Irish coast. After checking his position he sped toward the English Channel and Paris beyond. Thus, at the end of 33-1/2 hours of relentless tension he landed in the brilliance of flood-lighted Le Bourget airdrome, a hero to all the world.

Accepting the responsibilities of his new position upon returning to America, he flew a 20,000-mile Good Will tour, including a 2000-mile non-stop flight from Washington DC to Mexico City. At the conclusion of this mission the Spirit of St Louis was presented to the Smithsonian Institution, where it hangs today beside the original Wright Biplane, the first machine to achieve powered flight.

Essentially a modification of a sturdy mail plane built by the Ryan Aircraft Company of San Diego Calif, the NYP was nevertheless a great step forward in design. Utmost consideration was given to streamlining every possible part. Instrumentation was the best available at the time. The Wright Whirlwind engine chosen to power the ship was to establish itself as one of the finest types ever built. Brought to life under the skilled and daring hand of 'Slim' Lindbergh, the combination could not fail.

Our model is scaled 5/8 in to 1 ft, and presented in three versions: as a control line flyer with the Herkimer OK Cub .049 or .074; as a free flight gas with the K&B Infant or Torp Jr; and with the old reliable rubber power. (For information on building a .29 'Spirit' see end of article.)

Construction is identical for all types with a few minor changes to accommodate the various power plants, to be noted as the description progresses. In spite of the absence of dihedral the model performs realistically in free flight, unless of course, overpowered. The broad, sloping wing struts apparently provide effective dihedral.

Assemble the basic fuselage frame as indicated by the heavy lines. Construct the sides of 3/32 sq very hard balsa, over a sheet of wax paper to protect the plans..." 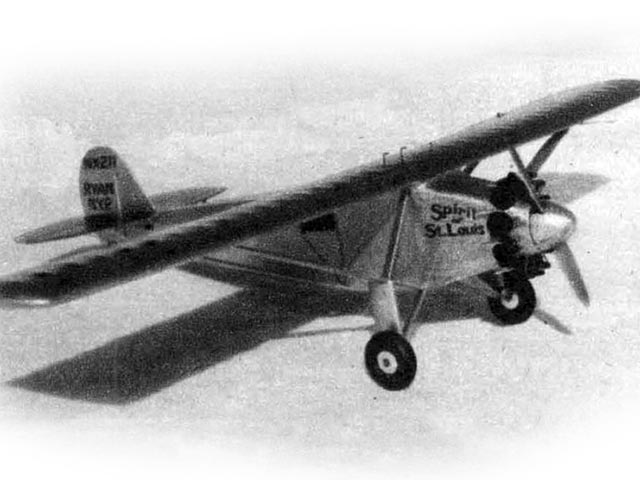