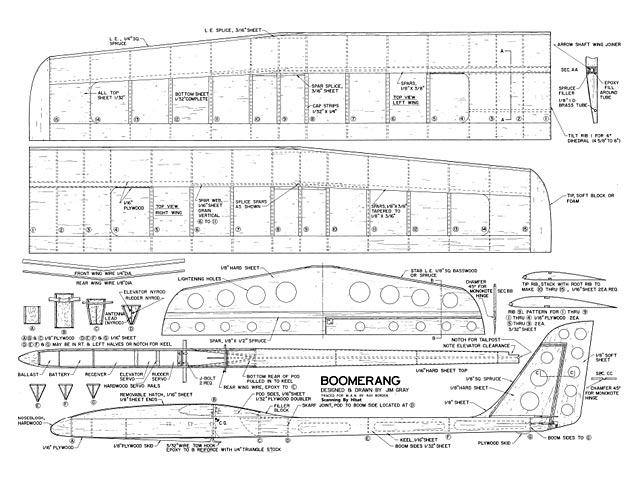 Quote: "A 'Boomerang' is supposed to go out, do its job and return - so should sailplanes. This 2-meter effort by MAN's 'Mr Soaring' matches its namesake in all three areas. Boomerang, by Jim Gray.

For about two years I'd been seriously considering the advantages and disadvantages of two-meter sailplanes, with the idea in mind of settling on a particular size and class of sailplane for fun flying, contesting, and - yes - building, too. The Dassel proved that a shorter-span sailplane need not give up points to long-winged birds when flown in world-class competition, and the Dassel has a span of only 84 inches! That's only 5-1/4 inches longer than 2 meters.

Although balsa comes in 3- and 4-foot lengths in this country, which is an annoyance when you need a piece that is typically 38 or 39 inches long, the 2-meter span has much to recommend it. Consider the ease of carrying this size sailplane in your car - as opposed to carrying an Unlimited Class or even a Standard Class bird. Although two meters is not recognized as a Class by the FAI, the increasing number of contests around the country have shown that it is popular.

As a cost-effective means of dealing with inflation, a two-meter sailplane has a lot going for it. Consider that the cost of materials goes up as the square of the increase in linear dimensions, not as a direct proportion. Therefore, a Standard Class ship could cost you 60% more instead of only 26% more than a 2-meter design. Some materials increase as the cube of the dimensional increase, and could cost twice as much as those for a two-meter size! This might mean that you could build two of the smaller ones for the price of a single larger one. Economy!

For me, the real clincher came when I attended the Two-Meter World Cup RC Sailplane Championships in California last January. There I saw thin wings, thick wings, pod-and-boom construction, Tee tails, Vee tails, light wing loadings, and heavy wing loadings. In short, a complete spectrum of ideas about how a two-meter sailplane should look and perform - embodied in some of the most beautiful creations one can imagine. The really spectacular thing about many of these ships was the performance they were capable of producing in flying multiple tasks: duration, distance, and speed. The designs I liked were clean, strong, and fast, yet they looked deceptively simple and straightforward. Frankly, I faced the sure knowledge that the two-meter sailplane class was literally exploding with development - this was where the action was, and it was where I wanted to be.

In contrast, I could find no really good reasons why I should not design and build a two-meter glider as the answer to what I personally was looking for in RC soaring; so I began the design. I chose a pod-and-boom to decrease 'wetted' area and drag. I chose a slim fuselage for the same reason, lower drag. I decided that the ship had to be easy to build, so the boom was designed to be built up from a single T-shaped crutch for strength, and skinned with balsa to form a triangular cross-section. The pod would be a simple rectangular cross-sectioned box, quickly cut out and assembled; just large enough to contain the radio. The stabilizer would mount nicely on the flat top of the boom, and the fin/rudder would sit on that.

I figured that if you're going to limit the wingspan, you'd better get some area, even if the aspect ratio has to suffer, so I designed essentially a 'plank' with only the outer panels swept back. The advantages of area are reduced wing loading and a good launch profile - steep and high. By choosing one of the new Eppler airfoils of semisymmetrical profile, I could offer speed without excessive weight penalty, while keeping a wing that is thick enough to provide great strength and capable of being loaded with internal ballast in the roots. Thus, the choice came down to the Eppler 193, 205 and 387 profiles - all very good, and well proven in RC sailplanes. I originally chose the Eppler 387, modified by Eric Lister to a 10% thickness and 4% camber for speed, low drag, and small pitching moment. The fact that the prototype used the 205 section only means that I had the ribs all drawn and ready to cut out, whereas I would have to draw the profiles for the 387, mod. 4-10. Lazy, some people would say..." 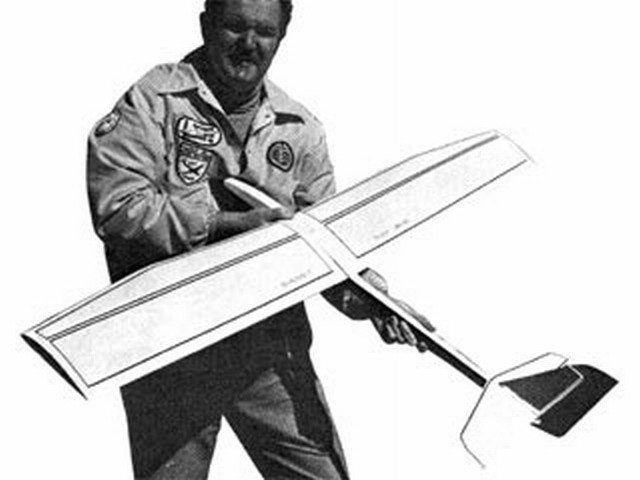