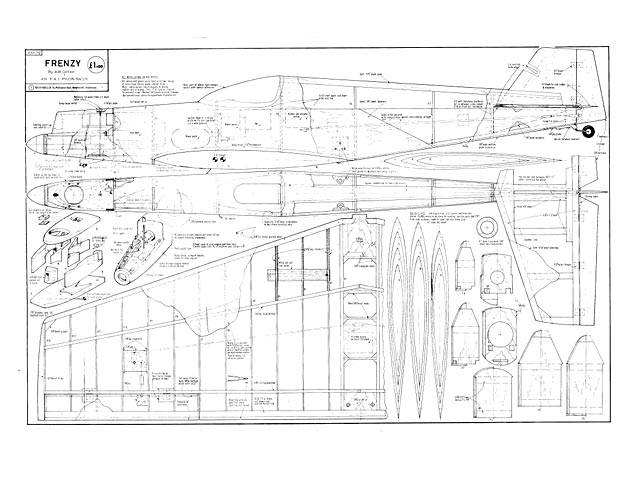 THIS, my 1971 racer, is the product of hours of brain-teasing, evoked by the sight of Frank Van den Bergh's Phaeton lapping my Cosmic Wind at least twice each heat, at the 1970 Nationals and at the Middle Wallop meeting. I just had to do something about that, so I started the old grey matter working overtime and came up with the following requirements:

These three add up to maximum acceleration from take-off and out of corners - a fact which was confirmed by Fred Deudney's articles on induced drag which appeared, comfortingly, after the prototype was built. Let's look into these requirements a little closer.

Minimum drag: This really had me scratching my head, and I eventually arrived at the idea of very sharp leading edges on wing, fin and tailplane with a fully symmetrical rib shape coming down to a very thin section at the tip. The wing and tail surfaces would also have swept-back leading edges, to produce a shape as near as feasible to a delta - the fastest wing planform. The fuselage has smooth flowing lines from the spinner to the maximum heightiwidth position at the rear of the cockpit - and this area is kept to a minimum by the gradual taper to the tail, which commences thereafter. The canopy is the streamlined rear section of a standard bubble canopy, which blends and directs the airflow around the rear turtle decking.

I have not used a retractable undercarriage, as I feel that any theoretical advantage is outweighed by the practical disadvantages, of which not the least is the weight penalty. Which leads me to the third requirement.

Minimum weight: This is largely up to the individual builder, but I can only say that my models have been designed and built so that the structure is strong enough, with the grades of wood specified on the plan. These have been arrived at over three racers, each one using lighter wood and modified structures, so that this model will stand up to all the G you can pull on it but, if you hit the ground (like I did at the Nats) there won't be much left. After saying which - if you are still with me you really must be interested in pylon racers, so now to explain as best I can the constructional methods I have used.

Construction. Cut out all the parts and make sure that you understand the plan before you use any glue. This should not take very long because, if you are going to build this racer, you will have built and flown quite a few planes already. If you haven't - don't build it.

Fuselage: After marking the former positions on the inside faces, join the fuselage sides and doublers together and set aside to dry. Mark the positions of formers Fr and F2 on to the engine bearers, find a block of wood to mount the bearer/former assembly on to and Araldite these together; remove from the block and check the alignment when hard. Heat curing the Araldite gives a better job.

Next stick the sides to this assembly and then build the fuselage in the normal way. The sequence is: formers, tailplane support block, fin/tailplane subassembly, backbone, turtle decking..." 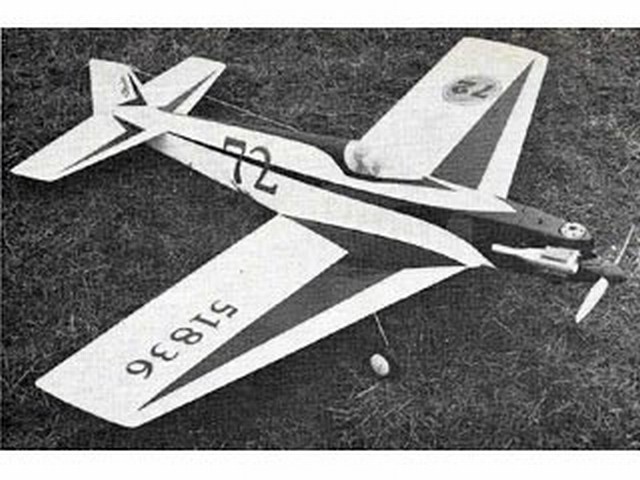