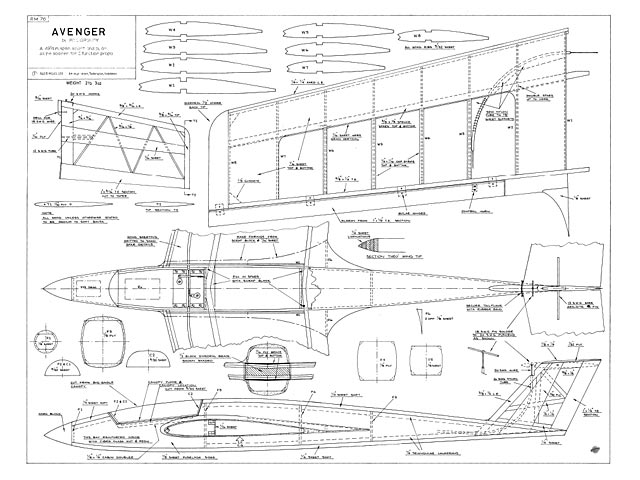 Quote: "A novel 'Fighter' type soarer that will start a new trend on the slopes this year! Avenger by Bill Grundy.

ARE you hooked on slope soaring, but looking around for something different? Something fast - exciting to fly! (Sounds like a TV advert) - then the Avenger fills the bill.

One afternoon clubmate John Ralph and I were chasing each other up and down the local ridge (very exhausting), when John suggested it would be a great idea if we were to have two or three fighter type models. As he was always belting me out of the sky in mid-airs (I am losing three-nil), I agreed that the models may as well look like fighters. The other soaring types in our club agreed that it was an exciting idea, too, but no one wanted to make a start. Rather than let such a scintillating idea fade away, I set about designing such a model. It was to have rakish fighter-like lines, and I thought a T-tail would give it that extra something, too.

The result turned out to be a one-piece model of very purposeful and striking appearance (even if I do say so myself) which, besides being fast enough for any pylon race, is highly manoeuvrable and quite acrobatic. The model uses ailerons and elevator, for compactness however, so it will not perform those manoeuvres which normally require rudder, unless you are particularly clever, or use some form of telekinesis.

My own Avenger has been strength-tested several times, when it plunged into the ridge at all angles, due to persistent radio trouble, which I have since cured (I dropped the receiver into the dustbin). I chose the well-tried Eppler 374 wing section because of its wide speed range, the T-tail to keep that back-end clean, and the all-flying tailplane, not for any aerodynamic reasons, but because it is neater and easier to install than elevators, on a T-tail model. The fuselage profile is also Eppler - it's a low-drag section, so why not a low drag fuselage?

Construction. Quite an advanced model, flying-wise, this is not a beginner's project from the constructional point of view either, though it will be found quite plain sailing for the bloke with a few average models to his credit. This being so, I am not going to go into copious detail on the construction. Have a good study of the plan first and, if there are too many things, you cannot follow, then you should put off building this model until you have built a few more run-of-the-mill ones. Some general constructional pointers are all that most average modellers will need, so here they are:

Start with the wing as it is a necessary part (for finishing the fuselage, I mean). All the ribs are shown individually on the plan, but you can use the sandwich method if you prefer it. Build up the wing using spruce spars, which are doubled up at the centre and webbed with in. sheet. After fitting the tube-and-cable aileron linkage and shaping the leading edge, fit the bottom sheeting (I use Evo-stik), trimming off level with the leading edge. Repeat with top sheeting, fit cap-strips and sand to shape before fitting the fuselage.

Having cut out the sides and all formers for the fuselage, wet the outsides of the sides (if you see what I mean) and glue them to the formers with PVA adhesive, bind with Sellotape and leave overnight to dry. In the meantime, start on the fin, building this over the plan, fitting one end of the nylon control linkage tube to it and gluing on the 1/32 in, ply side pieces..." 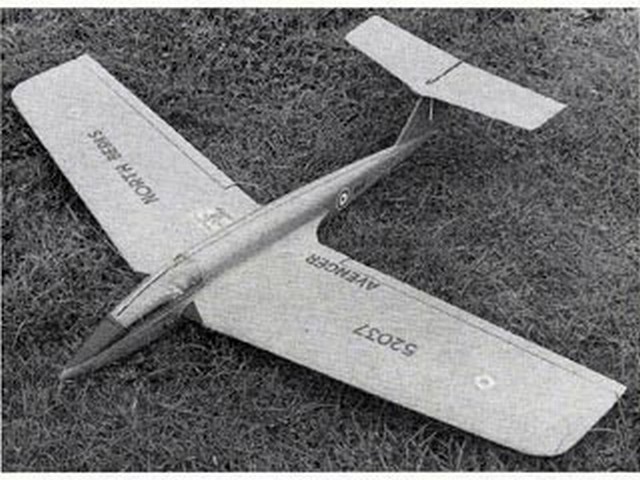 Superb model I built in 1972, it has resided in my loft since 1974 and I have just brought it out as I have returned to R/C flying. Here's hoping I don't wreck it first time out. The only weak spot I found was the tail/fin mounting which I see I shall have to repair before flying, ply discs on either side should suffice.
George McCree - 04/06/2020
Add a comment