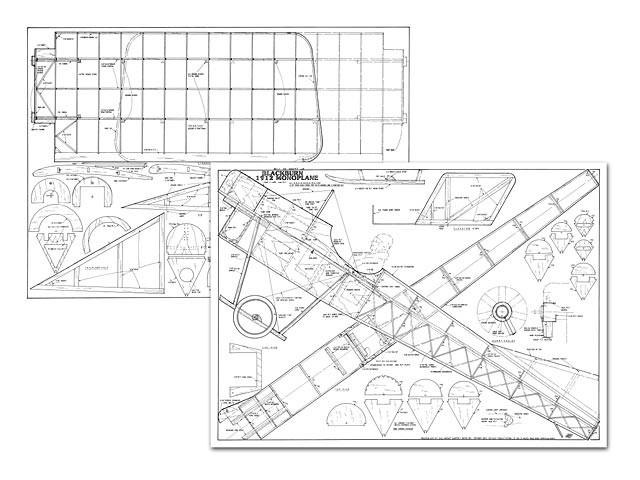 Quote: "Blackburn 1912 Monoplane model. 53 in wing span for three-function radio and .20 to .30 engines, by David Boddington

THE FIRST BLACKBURN MONOPLANE I designed was to 1/5th scale and was built, in four days, for the television series 'Flambards'. Built as near scale as possible (fortunately OW is only 30 miles down the road) the model featured a wing section similar to the prototype. Although it flew well enough in normal, slow, flight it did have one disconcerting habit. With full power on and in a dive there was a tendency to 'tuck under'. A change of wing section, somewhat in the face of aerodynamic theory, cured this problem.

Second of the Blackburn monoplanes was the 1/4 scale version which has proved to be very popular and is still kitted by DB models. In fact, I have had more feed back from modellers on this design than any other. Examples have won the South African Nats, come second in the Australian Nats and seems to give enjoyment to the flyers generally.

The smaller version presented here (approx 1/7th scale) follows the constructional methods of the larger versions ie it is functionally rigged. Originally built by Derrick Cox, powered by a Veco 21 engine, the model was loaned to Geoff Thompson who fitted a G-Mark radial engine - it seemed to be more in keeping with the spirit of the prototype Gnome engine. Unfortunately, the G-Mark was rather temperamental and flights with this engine were rather 'iffy'. I must admit to having lost the photographs of the model in its original form, the model is now showing signs of wear (and a little dust) but the illustrations should give an idea of how delightful the '1912' can look.

What engine you decide to instal will depend, to a large degree, on the type of flying you want to do. With the lower power range she will fly slowly - and scale like - but will be limited to calm conditions. With the larger engines (25 and above) the Blackburn can be flown in stronger winds and, of course, you can always throttle back for slow flight. Diesel engines are quite a good choice for this model, they will swing a large diameter propeller relatively slowly, a good feature for slow flying, lightly loaded models.

Radio Installation and linkages: Because of the triangular fuselage section there isn't a lot of spare space for the radio, so work out the installation before you start construction. If you can fit the throttle servo across the fuselage (in front of the elevator servo) so much the better as it allows the elevator servo to be centrally mounted. Closed loop cable linkages are shown to the rudder and elevators as these most nearly represent the full size control functions. Actually, the rudder horn should be slightly higher, with'the cables exiting the fuselage above the tailplane, but it is easier to route the cables as shown on the drawings. Engineering purists may be worried by the fact that the centres of the cable connections to the servo output and the horns are not identical, in operation this does not seem to give any problems! For those of you less concerned with scale accuracy you could use `snakes' and conventional rudder and elevator horns.

Preparation: There are rather more formers and ribs to cut out than you will get in the average sports model and I suggest that you do all the cutting out and wire bending before you commence construction. Accuracy of cutting and bending is important as it will make construction so much easier if all the parts fit first time.

In addition to resolving the radio installation you will need to mark on the front formers the correct engine bearer spacing for the motor being used, also the size of the tube for the nicad battery - this allows moving the battery to some extent to give the correct balance point. Cut-outs in formers F15 and F25 must be adjusted for the fuel tank dimensions (a 4 oz Mercury tank was used on the prototype model). Spoked, or vintage style wheels (3-5/8 in dia) are a must for the Blackburn. Details of how to make such wheels were included in the Autumn 1987 issue of R/C Scale Aircraft Quarterly.

Fuselage: Start by pinning down the 1/8 x 3/16 longerons over the plan view, the lower part of the fuselage will be built, inverted, over this crutch. Add crosspieces and lower half formers to the longerons (they should overlap the building board so that F13 and F14 can be glued at the rear end). Predrilled servo bearers should be glued to the formers before they are fitted and the nicad tube (.4mm plywood rolled) fitted insitu.

The undercarriage assembly is fabricated at this stage, build it onto a scrap plywood board with the spacing of the top cross members as for the fuselage (use mini saddles to hold the pianowire to the plywood). Bind and solder the pianowire sections together followed by the control line stranded cable cross bracing. Epoxy the spruce fairings and skids in position, but do not fit the 1/8 x 1/4 spruce crosspieces at this time. (These are fitted after covering is completed). Note that the front pianowire crosspiece is housed into the longerons (and 3/16in. sq. spruce) this is to allow the fitting of the engine bearers.

One point to note here. The centre of gravity of the prototype was near to the mid-point of the wing chord, but the model requres a balance point much further forward. This places the balance point quite close, vertically, to the wheel axle and, consequently, there is a risk of the model nosing over on landing - or even taking-off from grass. The wheel positions are already shown a little forward of scale, you can move them further forward if you wish. Epoxy the undercarriage pianowire crosspieces in position, but do not attempt to bind at this stage..." 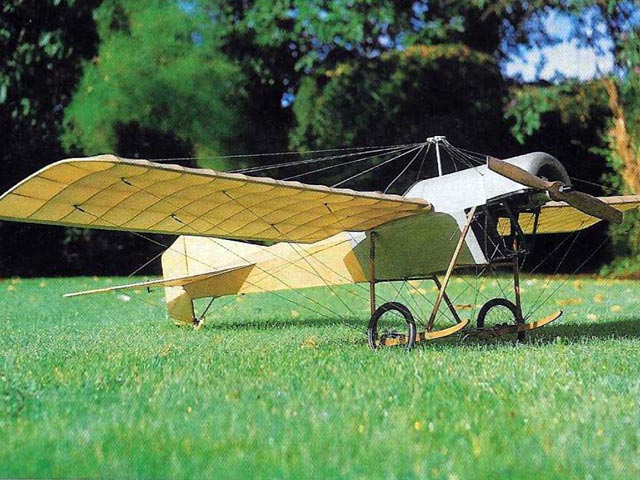