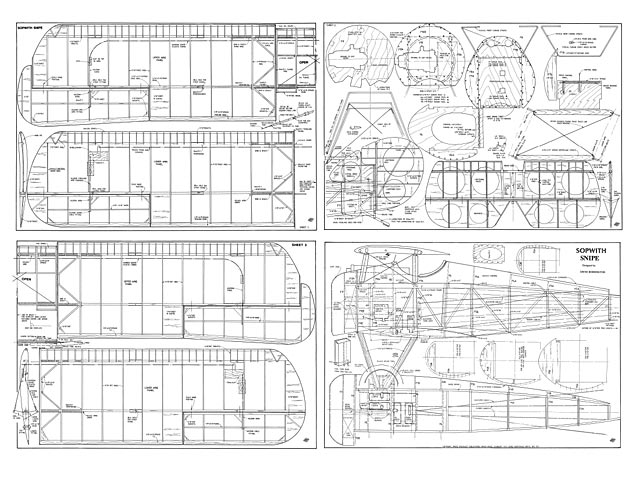 Quote: "Designed by David Boddington, built by Jolyon Bambridge, this accurate 1/16th scale, 62in wingspan model is for 40 - 60 engines and four function radio.

ONE CRITICISM that is sometimes levelled against the Free pull-out plans featured in R/C Scale Aircraft is the relative small size of the models. Obviously the size of the printed sheets limit the overall dimensions of our offerings to a great degree but this can be changed by splitting the drawings over two issues. When the magazine was still in its Quarterly format I was loathe to take this action - three months is too long to wait for part two - but now things are different. Thinking of suitable projects for a two part feature (if possible the basic fuselage should not extend beyond the plan parameters) two prototypes came rapidly to mind. One was the Hansa Brandenburg W29 seaplane and the other was the Sopwith Snipe WWI biplane.

The W29 drawings have, of course, already been published and so I set about the 'Snipe' myself. Selecting 1/6th scale gives a healthy 62 in wing span model which, until recent years, would be considered to be large. Engines from around '40' to '60' size should be suitable, try to select one that will not protrude beyond the cowling. Flying characteristics were not a concern, having designed quite a few WW1 biplanes I knew pretty well what to expect and if it flew anywhere near as well as Peter McDermott's 1/5th scale version it would be great.

Whether you start building immediately is up to you. It would be sensible to wait until the next issue when you have all the information to hand - but we don't always want to be sensible do we!

Background. Every effort has been made to make this model of the Snipe as accurate as possible, even to following the original works drawings where available. The only known variations to scale are in the wing section, where the thickness has been increased slightly, and in a simplification of the undercarriage springing. Purists could rectify these items and, with suitable detailing and finishing should end up with a very scale model. Three view scale drawings by Colin Owers use the same original drawing information so, hopefully, the model and the three views should agree.

An advantage with double bay biplanes is that, once the rigging has been permanently fixed, the outer wing panel may be removed as an upper and lower pair - the outside bay rigging stays permanently in place. This means that, if the model is dismantled for transport, there are just four rigging wire connections on each side of the fuselage ie. one pair of flying and one pair of landing wires. How these connections are made is for you to choose, you could go for metal devices - probably the quickest method - or with small brass plates and nuts and bolts, or scale turn buckles or forked ends as sold by Scale Model Research and Mick Reeves.

Preparation. Before you start construction do take the trouble to thoroughly inspect and understand the drawings. Decide on the locations of the radio equipment, positions are suggested on the drawing but the physical size of the servos will influence the bearer positions. Also you must decide on the engine to use so that you can space the engine bearers, cut away the formers as necessary and arrange for the throttle linkage route. Remember that the Snipe was a WW1 fighter and that it did not tear around the sky. For realism of flight you do not need a vast amount of power, more important is an engine capable of swinging a large diameter propeller.

I prefer to cut the wood parts and form the metal components completely before I start building, in this way greater accuracy can be achieved than trying to cut them piecemeal.

Fuselage. Instructions for WWI rotary engine powered, models often used to state: find a suitable sized aluminium teapot or saucepan for the cowl. - Well, I could never find one to fit, but if you can locate one with the right diameter and profile, good luck to you. If you decide to use a GRP, or built-up ply and balsawood cowl, then cut formers F11 and F10 accordingly.

Heart of the fuselage, as with the full-size, is the box framework. Constructed from 3/16 in strip, of various widths and 3/16 in sheet lower parts, two sides are formed, one over the other. Note that the 3/16 x 1/2 in top longeron extends into F10..." 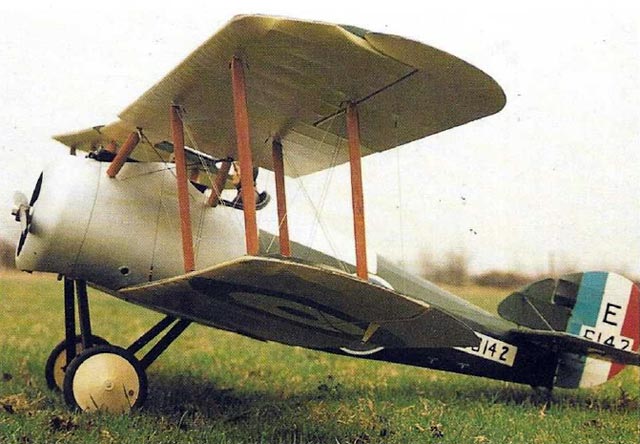