Quote: "Why I built the Corben Super-Ace: Having been to a couple of PFA rallies this summer, and thought that a home build would make a change from the warbirds I usually build. So after a look through some books, and then trying to find scale drawings, it was down to four alternative aircraft. After many hours of fiddling about with rulers etc I decided on the Super-Ace. Using the Williams kit drawings and some other info I found in an American magazine, decided the Ace looked good.

A scale of 1/6.5 was chosen because it gave me a span of 60 in. The wheels I had to hand fitted, and so did the Laser 50. So, with all portents good that early on, I had to get started. Also, four weeks later, I had arranged to meet David Boddington at Old Warden and this made me get on with the project. I think it works, I hope you think the same.

Flying: Well, this is the bit we all read first, so here we go. After waiting eight days for the 25+ mph winds to drop, the weather decided to give me a chance, so on a Saturday morning, the car packed, sandwiches made, it was time to go.

On arrival at the field only two members were there. After the 'Wot ya got now' etc, I grabbed the peg, fuelled up and started the Laser 50. Everything was going well. wind 10 knots straight down the strip, and after a little taxiing about it was time to take the plunge. Full up elevator, advance throttle. check swing with a tad of right rudder, off with the elevator, tail up, and moving at quite a rate (and only half throttle). After a run of 25-30 feet up she goes, fine so far. Climb up to 80 feet or so and time to turn. Crank in some aileron - funny she's knife edging! Agh! She needs some rudder, that's better - heart rate back to normal. After a couple of circuits Eric Dixon had found my camera and was saying things like - what about some low passes - no comment.

So after the photo session I took her up and started to do some aerobatics, loops, rolls (nice and straight for a high winger). I had already tried a couple of stalls, so thought a spin would be a good idea.
About 100 ft altitude, ease back on the throttle, she decelerates very slowly (she's a very slippery design), but as the speed decays and up elevator, the nose started to rise, now at 45°, full left rudder was added. Flick, spin and four turns later let go of sticks, nose down, opposite rudder, and out she comes. Very nice! I tried every manoeuvre I could think of, then some, (many non-scale, which would have pulled the wings off the full-size!)

Now the landing. Doing a right hand approach, and lining up down wind I throttled back to a nice slow Laser tickover. The nose was pushed forward (down) then using the engine to control the descent, I managed to do a nice three pointer (honest) - surprised me too! The undercarriage takes up all the little bumps. Taxi back to the pits and a little wipe down and well, after an airtest like that, what else can you do.

Have now moved the nicad 1 in forward, which has helped calm the Super-Ace a little. I have flown this aircraft for six flights (same day) and have come to the conclusion that she would fly on a good 30 2 cycle, very scale like. But if you like to race then no more than a 50 4 cycle... Keep it scale!

Fuselage: The basic fuselage is of box type construction, 3/32 in sheet, with 1 mm plywood doublers. Formers F1-4 are 1/8 plywood with 1/2 x 3/4 in beech engine bearers. Mount your engine to the bearers with blind nuts, (epoxy well).

Once the sides are cut out and sanded contact glue the ply doublers in place. Now score down the line at F2 and bend in the nose section. With the engine still bolted in place epoxy the nose formers together. When dry add the sides, making sure everything is at its correct position, and square! When all this is dry pull in the tail end. Add all the other formers. Sheet top front with 3/32 in sheet. The model prototype had fabric covering behind the pilot each side. but I wish I had sheeted this also (just trying to save weight at the tail, didn't need it). Add control rod snakes or closed loop and sheet lower fuselage. The nose also needs some 1/4 in sheet each side back to F2. Add nose block with plywood doubler.

Now for a choice, the prototype Super-Ace had flat sheet sides, later home build aircraft have a couple of stringers down the sides. to give a more rounded look. So, as you can see, to give me a choice of colours (not just yellow-black-silver) I put the stringers on mine, 1/8 in spruce will do fine and don't forget to put 1/4 sheet under the nose section as well as the sides..." 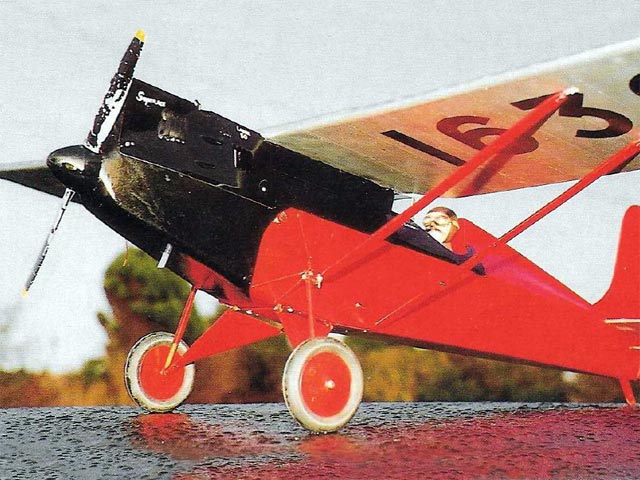