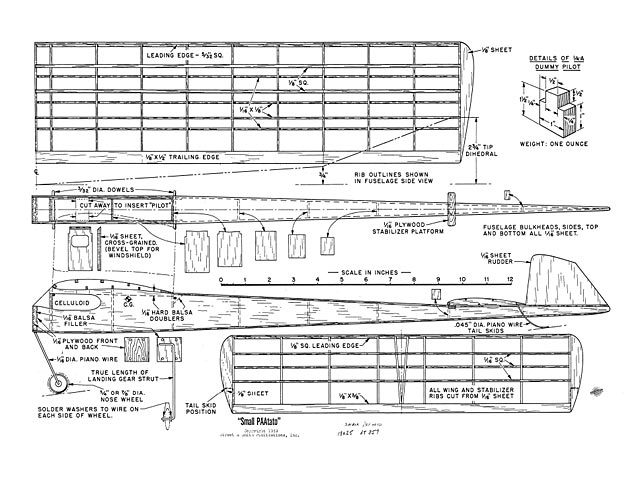 The PAA-Load events have embraced 'quarter-A' size engines! The reduced size should go a long way towards making PAALoad more popular, what with the simplification of the model due to compactness, to say nothing of easier transportability and speedier construction. Inherent strength of a smaller model will permit use through several contest seasons instead of the vulnerable giants that presently prevail.

In PAA-Load models I like to keep the dummy pilot and simulated cargo up forward to achieve the short-nosed, small-stabilizer concept that performs best in contest weather. On fair-weather days the big-stab jobs do turn in the best durations, but for the real contest work (usually windy) I'll take the model with the smaller stab that has a greater angu-lar difference between the wing and tail, allowing quicker recovery in gusts and less altitude lost. The small-stab model has a better transition from power to glide and is not plagued with 'bugs' of the spiral instability type.

The single-wheeled gear works well and allows easy take-offs. Wire tail skids (2) are mandatory, to comply with the rules. You will find the one-wheeler easy to get along with, as it is almost impossible to 'goof-up,' even on cross-wind take-offs.

With the dummy way up front, the taper of the cabin can start farther forward, keeping down cross-section and tail weight. The cabin section is long enough to allow shifting the dummy for glide trim. The dummy is inserted where indicated through the top of the cabin then shifted fore or aft for balance.

Styrofoam sheets, about 1/8 in thick, are used as spacers, allowing dummy movement in increments of 1/8 in - this is 'fine' enough. Do not be fooled with what seems to be a nice slow glide; for here the model can be stalling and on a windy day better time can be racked up with the dummy shifted farther forward. If this is not very clear, just make sure that you make enough test flights before going to any contest, so that you know how to trim the model for maximum performance in all types of weather.

With a wingspan limitation, undercamber is a must. The stabilizer shown might be trimmed just a little in area - but the gain in total performance would be very small. Poly-dihedral was employed to cut the wing down into small panels, making for easier construction.

A sheet balsa fuselage is used for max-imum strength and durability, with mini-mum weight. The 'sandwiched' landing gear with nut-and-bolt engine attachment is best - wood screws soon loosen, and are less desirable when adjustments are necessary. The nose section should be well cemented, as this is the heart of the model and takes a real beating, what with dummy, cargo, engine, and landing gear all contributing their stresses and strains.

Dowels were used to hold the wing in place - they should be just long enough to do the job and that's all. If too long, they will not allow the wing to pop off when an obstruction is met - more wings are broken this way than any other. The stabilizer platform is wide enough to allow easy tilt adjustments. Narrow platforms make adjusting too critical.

The rudder-aft-of-stabilizer works well. It does not seem to get blanketed out in turns, and if the stabilizer is knocked out of position, the flight is not ruined as is the case in rudder-on-stab jobs. The stab does not need to be keyed in place.

Accurate stopping of engine run is important. Your favorite, time-proven gimmick has to be light, as we have less weight to play around with in this small size.

Multi-spar wings are employed for ease of assembly and inherent strength. Anti-warpage qualities are good, but if you want to use some other favorite type, the responsibility rests with you. The simple sheet rudder needs no explanation, holds adjustments well, and runs down into the fuselage for maximum strength. We can not over-stress the importance of flying before any contest. It is a cruel feeling to do just 'passable' flying with a new job at a contest and later find that with just a little different trim much better performance was possible.

Declining interest in Clipper Cargo had come about partly because of the feeling of late that it is a specialist's class, like indoor models. And ever-in-creasing engine power meant models ungainly in size. The 1/4A event should go over big; now, with the wing-span limit and tiny power plant we have a durable combination. The all-up weight will not penalize the model..."

This is a very basic design and should fly very well and consistently. It seems a bit overbuilt for an .020, I'd suggest 1/20 sheet would be the thickest side and a 1/32 better, with longerons adequate to the dummy! Doublers from the nose to dummy and former stations! I think that airfoil is questionable w/a NACA 64071/2 probably better!
Bobbylang - 25/04/2016
Add a comment