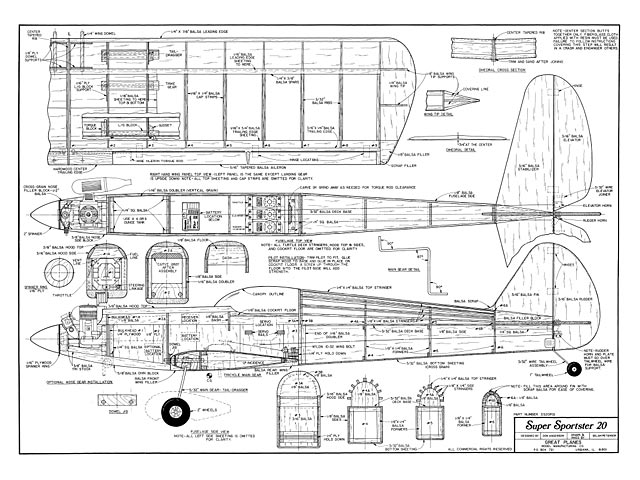 Update 13/11/2016: Replaced this with a good clean scan of the correct plan now, thanks to MarkWinstanley.

Seems the previous file was a resized 60 plan with a bad title block.

GOOD NEWS, model fans! Great Planes has added a new member to its Sportster family. She’s the attractive low-wing Super Sportster 20. Give this one a try and you’ll find she lives up to her name!

THE KIT: The kit is very well packed and protected. I found the balsa to be of the highest quality and well suited for its intended use. The hardware package was fairly complete. The motor mount, hinges, nuts and bolts, and even the wheelpants were all neatly tucked inside. The plans and step-by-step instruction booklet were clear and easy to understand.

CONSTRUCTION: The first step was to construct the tail group. All I needed to do was sand and hinge.

When this was completed I moved on to the wing assembly. At that point I had to decide if I wanted a tricycle gear or a tail-dragger, and I elected to go with the tail-dragger configuration. Ribs 3 and 4 had notches for the landing gear mount both fore and aft. I glued some scrap wood in the aft sections of the ribs for fillers. I next glued the 1/16-inch landing gear supports to the ribs and sanded them to the contour of the ribs, which I then laid aside.

I began assembly of the right wing panel by laying the bottom spar on the plan and adding all the ribs to the spar. Once all the ribs were in place, I added the trailing edge. Next I used a straightedge to draw a line on back of the leading edge about 3/32 inch from the top. This was for reference to align the ribs. I used a piece of 1/4 x 1/4 x 36-inch balsa stock as a shim under the leading edge and took advantage of my pencil line when it came time to place and glue the ribs to the leading edge. I added the top spar once that was completed. The next step was to add the center sheeting.

The time then came to turn the wing over and glue the landing gear block in place. I added the bottom sheeting, and capped the ribs. Then I added the sheeted wing tip.

To build the left wing I repeated all the above-mentioned steps. Once I had both left and right halves completed, I joined them. Great Planes supplied a wedge-shaped balsa center rib for the root end of the left wing, which made setting up the dihedral on the Sportster 20 quite easy. Using 5-minute epoxy, I glued the wedge-shaped rib to the left wing panel and sanded it to the contour of the wing. Next, I glued the right wing panel to it and added the ailerons.

Assembling the fuselage was my next challenge. First I prepared the fuselage sides by installing the 1/16 balsa doublers cross-grain on the fuselage sides. Next I marked the bulkhead positions and drilled the pushrod exits. When that was completed I made a trial-fit of the wing into the wing saddle. Once I was sure it matched, l laid the right side back over the plan and added bulkheads 2 and 3 before pinning it down. I aligned everything and added formers 2 and 3, then I added the left side of the fuselage. When all glued areas had dried, I added the wing hold-down block and all the 1/4-inch tri-stock braces. My next step was to pin down the deck base and add all formers and all the pushrod braces.

Assembly was going smoothly and it was time to pull the aft section of the fuselage together and glue the sides to the rear deck base. I then sheeted the bottom of the fuselage and turned my attention to the top of the fuselage. I started the top by preparing all top formers and then went on to install formers 1A, 2A, 3A, and 3B. Since the cockpit floor must be installed to determine the placement of the dash, I tackled that before preparing the hood side pieces. The balsa hood side pieces needed to be twisted in order to fit the front of the fuselage.

Adding formers 6A and 6B was the next task at hand. I pinned the stabilizer in place and aligned it with the back of the fuselage. (This gave the correct location for former 6B.) When that was complete I removed the stabilizer and added all the formers on the rear deck and 1/8 x 1/4-inch stringers. Adding the nose blocks and sanding all the needed areas completed the construction.

Then it was time to cover the Super Sportster 20. I chose Super MonoKote and was pleased with her glossy, streamlined appearance after it was applied.

Installing the radio and engine was the only project standing between me and completion of the Super Sportster 20. Using self-tapping screws I installed an OS 25 FSR ABC from World Engines to the motor mount supplied in the kit. The radio went in just as the instructions directed, with no problems at all.

There she sat-a real beauty weighing in at 3 pounds I0 ounces. She was complete and ready to head for the sky.

FLYING: The day of her maiden flight was great. The air was perfectly still and the temperature was 70°. The sun shone warmly as I took the few minutes necessary to assemble and fuel up.

I flipped the OS Max 25 and she came to life. After some minor engine adjustments there was nothing to prevent the Super Sportster 20 from taking to the air. As she taxied out I noticed she handled nicely on the ground. Once she was in position for takeoff I advanced the throttle slowly and she tracked straight, with little rudder input needed. At about half-throttle she broke ground and tracked like an arrow, with very little trim needed. After a couple of passes for photos it was time to pull out the stops. I had a good idea of how she’d fly since l’d flown one of her big sisters, the Sportster 40. I experienced no difference in the flying qualities. The Super Sportster 20 handled like a dream-she’s a real winner! 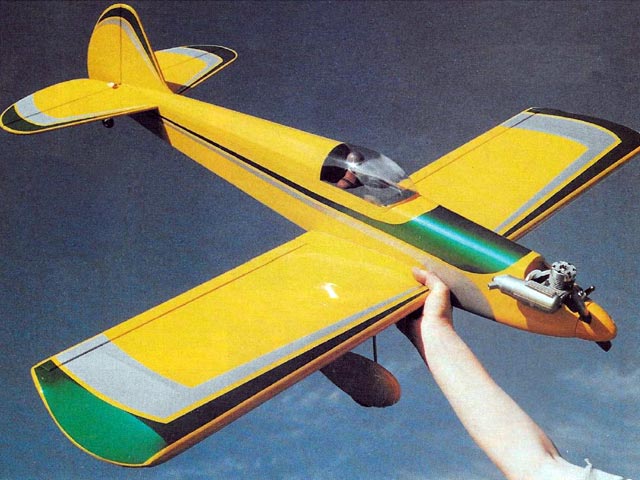 Ah. OK. Thanks for the corrections. Seems this is not a Super Sportster 20 plan, it's actually a re-sized 60 plan, but has been mis-identified. Will change this entry asap. Anyone out there got a clean 20 plan? Thanks
SteveWMD - 23/04/2016
Fixed now.
SteveWMD - 13/11/2016
Hi Mary - I thought you would like this photo of Don Anderson which was taken in my house in Detroit in 1972 [more pics 004]. Don was a test engineer in the General Motors' Pontiac Motor Division's Bumper Test Laboratory in Pontiac, Michigan. I was on a 1 year working assignment as a Body Engineer from Vauxhall Motors in England. This included two work experience periods and two at the General Motors Institute in Flint. I met Don during the second work period finding out about 5 mph bumper tests and we spent a lot of time talking about model aircraft. Don went on to set up 'Great Planes'. I don't know what model he had on his lap, but it certainly has the look of models he designed later in life for Great Planes.
ChrisPinn - 29/08/2017
Add a comment