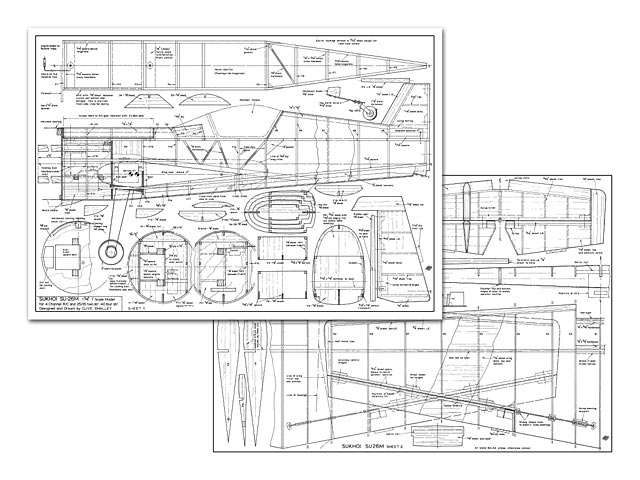 FIRST APPEARING at the 1984 World Aerobatic Championships the SU-26 represented a departure from the large slow-flying monoplanes of the Eastern Bloc countries typified by the Yak 18 and Z1 in 526 Series. Smaller, and with more power, the SU-26 has become more competitive over the intervening couple of years, until by the 1986 Championships, held at South Cerney, Gloucestershire, England, it was the preferred choice and used by all the Soviet team members.

The Model: The model design was based on the excellent three-view drawing, prepared by Pat Lloyd from original Soviet material, and study of the 80 or so photos taken by the author at South Cerney. It therefore represents the later SU-26M version with the revised canopy, slightly modified wing and tail tips, and with wing root fillets.

The prototype is powered by an OS 25 FSR, mainly because O.S. produce a helicopter silencer for this motor that fits nicely within the cowling. The plan proved rather deceptive in that the finished model appears somewhat larger in the flesh than the drawing indicated. A good 0.35 cu ins or 0.40 cu ins sports engine would give better vertical performance. This is a feature of the full size flight envelope that the 0.25 cu ins engine could not quite reproduce. Possibly the ideal power plant would be a 0.40 cu ins four-stroke such as the 0.S.40 FS Mk 2, but the rocker box will not be cowled, and the centre part of the firewall and former F1 will need to be located slightly further aft. As standard a 6oz square tank will fit between the bearers and fuselage side. All the R/C gear is located on or in front of the CG obviating the necessity for nose-weight.

One important point that may not be appreciated from a casual glance at the plan is that the model is 'One-Piece', R/C access is through a top decking hatch. There are two reasons for this option. Firstly with a mid-wing and fairly thick root section, a one piece bolt-on wing would have made for a weak fuselage. The alternative using two piece wing panels slid on to dowels presented difficulty around the wing fillets and constructing a neat mating joint on the wing underside due to the bulkhead curvature. The latter system would need an access hatch anyway.

Secondly any form of separate wing, on a small model, adds extra weight through the extra structure required. Consequently the wing loading slides upwards to the detriment of the flying characteristics. The author found no difficulty handling the model during construction, despite building in a restricted space. Just keep in mind that it is one-piece and don't turn around or 'fly' the model without thinking first. Storage and transportation should present little problem, as the design is smaller than many control-line stunters of a few years ago, which were nearly always one-piece, with little thought otherwise!

There are a few minor deliberate deviations from scale, most of which could be changed by the fastidious scale 'nut'. The most obvious is the reduction in aileron size and hinging method. The full size has HUGE ailerons which if reproduced at this model size would make it very twitchy. True the movement can be reduced but the higher gearing resulting would make centering of the aileron extremely difficult unless the servos had very good resolution. Even then ANY slop in the system would be magnified. If anyone is brave enough to try full scale ailerons, the author would be delighted to hear how you fare. For those wishing to try, the ailerons are the correct scale span but are reduced in chord. Simply moving the rear spar, aileron leading edge, and torque rod forward are the only mods needed. The aileron hinging has been simplified to normal 'model' practice, but could easily be made scale with short 1/4 in sheet bearing using centre-point hinges inset from the aileron leading-edge. This would be more appropriate with full scale ailerons. I would guess most builders will stick with the system drawn!

Washout, though not scale, has been included in deference to the stubby tapered wing planform, to make the low speed handling characteristics easier for Mr Average Pilot. There is a very interesting geometrical problem associated with including non-scale washout. Space precludes discussion here but this has been covered in depth in my Scale Column in the May edition of Radio Modeller as it is equally applicable to other aircraft. To digress slightly the May Radio Modeller will also feature a further page of colour close-up detail photos of the SU-26, differing from those presented in this magazine. Prospective builders will find this most useful for additional detailing work.

The elevator hinge-line has been re-positioned slightly further aft, though the tail outline remains scale. This is of less importance than the aileron mods and could be made true scale with less associated control problems.

The wing and tail aerofoil sections have been slightly modified to simplify building. These changes are not very noticeable on the completed model. That about covers the scale deviations. There is one other area where the choice is left to the builder, namely the clear perspex fuselage panels. The design is such that these can be incorporated or simply planked over and painted on. No other structural changes are necessary. In fact the decision as to whether these are fitted could be left until construction is completed. Either then cut away the planking or paint as desired. It is however easier to plank the fuselage in separate front and rear sections, so the choice is yours. Lets build a Sukhoi.

Construction: The construction notes have been kept fairly clipped to cover as much ground as possible. The wing and tail surfaces will be needed during assembly of the fuselage so logically should be built first.

Tail Surfaces: These are all built in a similar manner, straight on to one skin. Use only light balsa sheeting and pin down whenever possible to prevent any built-in twist.

Wing: Adding washout has made the relatively highly-tapered wing easy to build. It is basically constructed over the lower skin which can be pinned flat to the building board from the mainspar aft. The angles of the rib underside have been deliberately designed to be the same from root to tip. Building flat will automatically build-in the correct amount of washout (see Radio Modeller Scale Column).

At the time of writing ASP Ltd. were looking into the possibility of offering foam wing panels. My own view on this is that the built-up wing is quicker to build and is likely to be lighter in weight. It is purposely designed to be so. However if you choose to use foam wing panels, I would be interested to know how you go on. My original wing completed with torque rods and sanded to final shape weighed only 8ozs.

Make up the four skins oversize to allow for the curvature, around the rib front section. Mark all spar and rib positions. Pin down flat as FIG 1 and glue on the spar, setting at an angle with the template. I should have mentioned the wing can be built either in two separate halves or one-piece, 'rocking' each panel during construction..."

Note this design was also later published in 1992 by RCM as Sukhoi Su-26M (oz7455) which is the same plan but a nicer print, on more paper, so has more space to show full wing layout, etc. Probably an easier, clearer drawing to read. 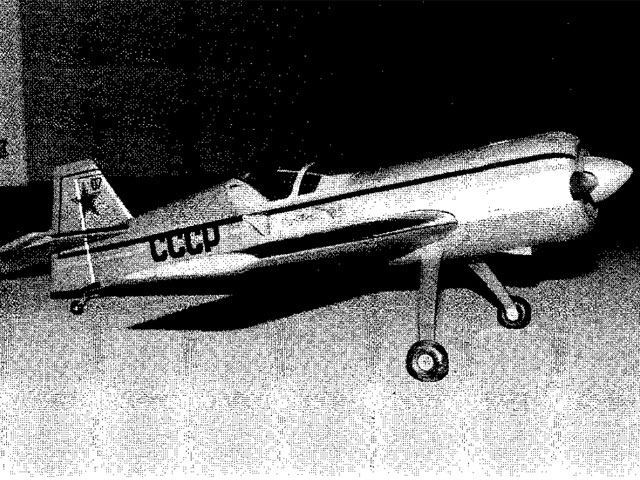 Neither the plan or the magazine article state control throw measurements, are they available?
C.Burgess - 05/11/2021
Add a comment