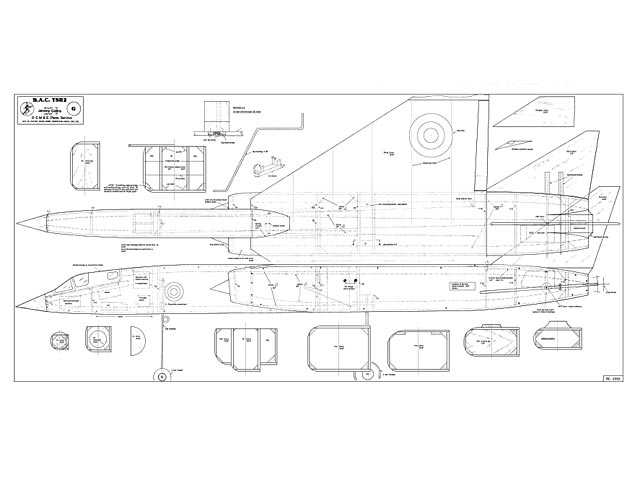 BAC TSR-2. Scale model of the prototype strike aircraft. This is a pusher prop style model, for 0.25 power.

Quote: "Jeremy Collins invites you to build a model of Britains ill-fated tactical strike aircraft. Designed for .25 to .35 engines and 4-function radio.

THE TSR2's UNUSUAL LAYOUT, with the long nose and delta-like wings and the sheer bulk of the aircraft (try and see the prototypes preserved at RAF Cosford or the Imperial War Museum at Duxford) make it an impressive piece of machinery.

The TSR2 had a chequered history. Born from an Operational Requirement for a tactical strike and reconnaissance aircraft able to fly at transonic speeds very close to the ground, it was designed to provide a tactical nuclear strike capability for the RAF and would have replaced the Canberra and also the Vulcan in its low-level role. The design combined elements from both the English Electric and Vickers proposals to OR339 and OR343, with the final design bearing closest resemblance to the English Electric design. As the TSR2 was a total 'weapons system' and Vickers had most experience in the electronics area, they were given leadership for the project, with English Electric responsible for the construction of the hardware.

Four prototypes were built, but only one (XR219) had flown when the project was cancelled in 1965. At that time the prototype had completed 24 flights and shown superb handling characteristics, although dogged by early problems with the engines and undercarriage. The single prototype that had flown ended its life as a gunnery target at Shoeburyness, assessing the damage absorbed by modern airframes. All jigs, production tools and parts were ordered to be destroyed. Fortunately two prototypes survived and are on view at theAerospace Museum at Cosford and the Imperial War Museum out-station at Duxford.

The TSR2 had been on my list of possible models for a long time and publication of the superbly detailed scale drawings in Scale Models in early 1985 put it high on the 'desirable' list. However a true-scale model, using ducted fan propulsion, did not appear possible because of the small wing area.

A study of some of the all-sheet near-scale models by Alex Weiss prompted thoughts of a similar approach to modelling the TSR2. Indeed the design and construction methods owe a lot to those used by Alex for his range of all-sheet models.

The Model: I would describe the model as a 'cartoon scale' design. I have stretched some of the dimensions to provide desirable model characteristics and in particular the wing leading edge has been brought forward to provide additional wing area while retaining the scale planform. The air intakes are moved forward a similar amount to maintain the relationship between wing root and intakes. To restore the characteristic long nose of the prototype, the fuselage has been extended forward of the wing leading edge. The effect of these stretches is not noticeable, and I think the model manages to retain the distinctive proportions of the prototype. In

other respects the outline is basically accurate, helped by the largely rectangular fuselage cross-section of the full-size, which lends itself well to the all-sheet construction. Control is by conventional ailerons and an all-moving tailplane (though lacking the anhedral of the full-size), unlike the prototype which used all-moving tailerons to control both roll and pitch, the wings carrying flaps only. Judging from the flying performance, true taileron control would probably provide enough authority, but I'm afraid I wasn't that confident at the design stage.

Power is provided by an OS 25FSR ABC driving a 9 x 6 pusher prop and it is worth pointing out that a powerful engine is essential for this model. Use of a 'cooking' or 'port' .25 is unlikely to provide sufficient urge, although a sport .35 might well be adequate. Using such a motor might require a larger fuel tank and some small adjustments to engine bay layout,

Construction is straightforward and is almost entirely from 3/16 and 1/4 in sheet and 3/4 and 1/2 in triangular stock. A fixed undercarriage is used, which although detracting to some extent from the in-flight appearance is practical. Substituting a dolly undercarriage would improve the appearance and save some weight at the risk of damage to the fuselage bottom and propeller on landing. Hand-launching might also be practical, as the low-speed handling is quite docile. I will admit that I have not tried this. If you have reasonably large hands it is possible to grip the fuselage at around the undercarriage position, but I have also suggested a recessed handhold on the plan which would provide a better grasp.

A lot of wood goes into the model and selection of the balsa for wing and fuselage construction must therefore be done carefully. Each sheet of 3/16 x 4 in balsa should weigh not more than two ounces, so light and mainly soft balsa should be used. The sheets for the wing should be slightly firmer. The design adds more than adequate rigidity, although the wing will seem very floppy before it is attached to the fuselage. Although the TSR2 has a long nose, which helps keep the CG in the right place, try and keep the aft end as light as possible. I had to add 4 ounces of weight to the nose and on the plan have shown the servos and nicad installed further forward (compare to the photographs) so as to help keep the CG in the right place.

Wing: Construction can usefully start with the wing, as this will be heeded to line up the aileron pushrods during fuselage construction. Cut out and glue together the wing components from 3/16 light balsa. Sand smooth on both sides, separate the ailerons, sand leading and trailing edges to section and glue in place the anhedralled tips. Mark on the underside of the wing where the fuselage will be glued and then cover the wing undersurface in white Solarfilm or similar, leaving the fuselage/wing glueing area uncovered. Cover and hinge the ailerons after epoxying the torque rods and control horns in place.

Fuselage: construction commences by cutting out the front and rear fuselage sides from 3/16 x 4 inch balsa, noting the outline marks on the plan. A strip approximately 3/8 in wide must be added to the 4 in sheet to provide adequate width. The rear fuselage incorporates most of the air intake sides as well, so there is a considerable overlap of front and rear fuselage sections. 3/4 and 1/2 in triangular balsa stock is glued along the edges of the fuselage sides. Saw-cuts will be needed in the triangular stock to allow it to conform to the curved edge of the sides..."

Quote: "Hi Steve & Mary, This scan comes from a copy of the original plan, captions have been retyped and formers relined for clarity. This is a model I always intended to build, but never got around to it. A bit late for it now, cleaning up the plan will have to suffice. But I do know now exactly how I would have built it. Cheers, KraftyOne" 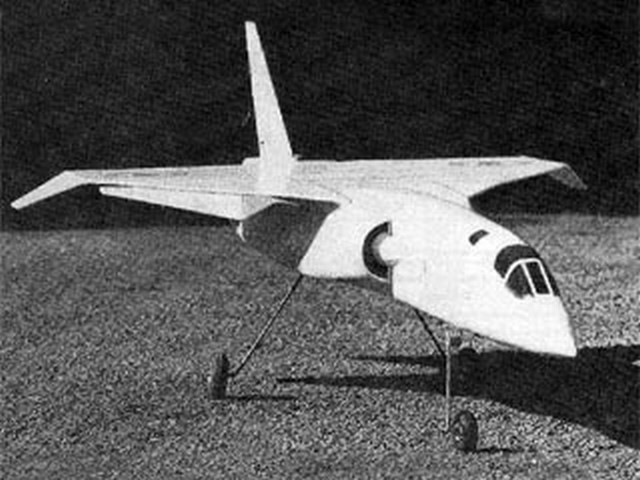