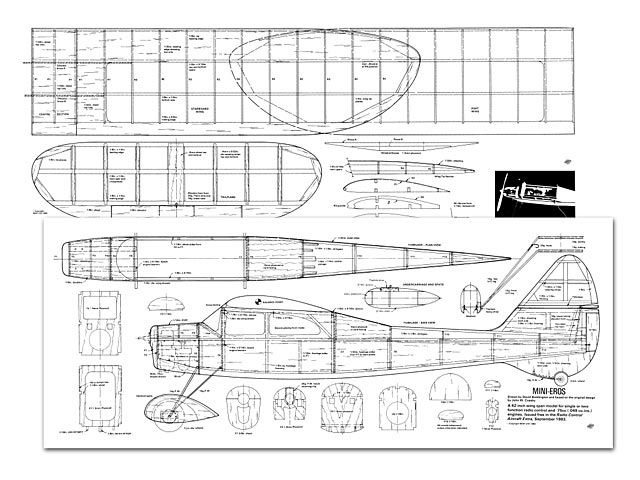 Quote: "Vintage, with a difference! Mini-Eros, by David Boddington.

Your full size pull-out plan for a half scale version of the vintage 'Eros' design. Designed for small diesels and glow plug engines of around .75cc capacity (.049 cu ins), and single, or two function radio.

I REGULARLY PASS by the field at the rear of my previous home where, as a younger and much fitter lad, I enjoyed much of my model flying, control line, free flight and later, radio control. It now horrifies me to think that we ever dare contemplate flying powered free flight models from this small patch, surrounded as it still is by trees, a road, two factories and some houses. The fact that we flew successfully from this restricted field on a regular basis, says a lot for the reliability and consistency of the model designs of the day and, I like to think, the skill of trimming out the models.

Although ours was a small village, (2,500 population) we had our own Aeromodelling club - the headquarters being the shed in our garden. One of our members decided to build the 'Eros'. To say that the model seemed large for those days is a classic understatement, it looked positively 'ginormous' and took up the whole of the shed during construction. When finished (it was powered by a 5cc Wildcat diesel) it was wheeled out to the 'back field' and given some test glides - down the hill towards the brook!

Having sorted out the glide the tank was filled and the engine timer, a vital control for powered free flight models, was set for a few seconds engine run and the model launched. Gradually, the model was trimmed out to give a left/left trim (left under power and on the glide) and, from experience, the timer set to ensure that the model would land back in the field; the length of engine run would depend on the strength and direction of the prevailing wind. It makes me feel quite brave just thinking about it!

Small is beautiful. The pocket-sized 'Eros' presented here uses similar constructional methods to the original and should please the traditionalists who delight in open structures and 'cutting and sticking'. Rudder and elevator surfaces have been purposely kept small as the intention is to have a 'guided free flight' model rather than an R/C creation capable of performing aerobatics. You can omit the elevator control if you wish - it would assist in fitting a standard size R/C output into the limited space available.

One of my four faithful old multi .75cc diesels powered the prototype model and any similar sized engine (PAW 90, DC Merlin etc.) could be fitted; 049 glo engines would also power the Mini Eros but, a diesel engine is more appropriate to this design.

Century Systems excellent miniature two function system was fitted in the prototype model, using a jack plug isolator/charging socket in lieu of an on/off switch. There are a number of other small R/C airborne units on the market having a total weight of 3 to 4 oz with two servos. Closed loop rudder control was used but you can take your choice of this system or a pushrod linkage.

Building costs of the 42 inch span model are very modest, but do take care in the selection of balsawood, particularly when pairing wing spars and fuselage longerons. I would not normally recommend using Cyanoacrylate as the principal adhesive for an R/C model, however, the size of this design does allow you to use it..."

Drawn by David Boddington and based on the original free flight Eros (oz1664) design by John Coasby, from 1948. This is a 41in wingspan model for single or two function radio control, with .75cc (.049 cu ins) engines. Issued free in the Radio Control Aircraft Extra, September 1983. 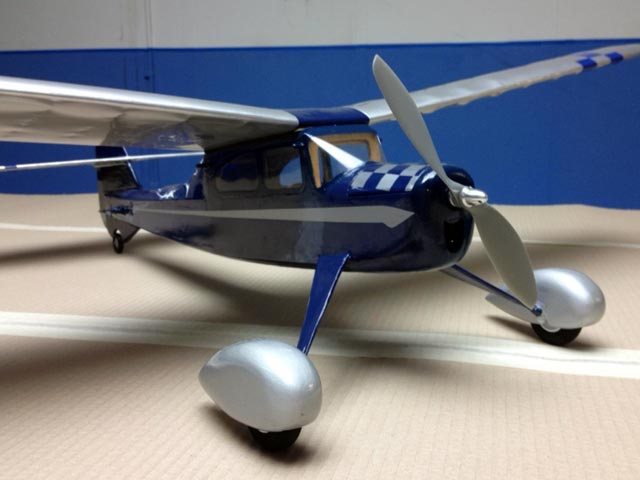