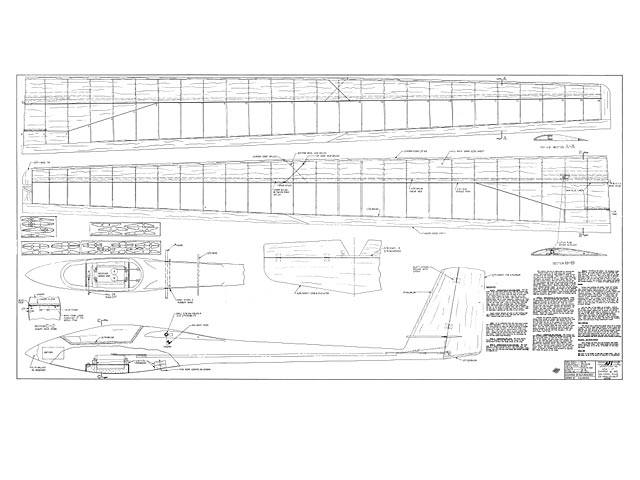 Quote: "Hello Steve, Attached is a file containing a full size PDF of an AstroFlight ASW-17 that was sold in kit form 40 years ago. I recently came into possession of an unbuilt kit and had the plan scanned straight off. Although it has a composite fuselage, it may be of use to someone doing a restoration or repair. Thanks for a great website....so many planes, so little time. Best regards, Steve"

Our author, a self-described glider nut, describes his project or 'that great big beautiful bird' which tells us that undoubtedly this was, to him anyway, a happy project.

I have been building and flying gliders for longer than I care to admit, and I have been flying R/C sailplanes for the last four years. I have a weakness for large sailplanes and for scale sailplanes so when Walt (MAN at Work) agreed to my doing this article on the Astroflight ASW-17, I waited with anticipation for the kit to come. I did not have long to wait as it was less than a week from the time I wrote Astro Flight until I received the kit by parcel post-special handling. (incidentally, that is an excellent way to ship model stuff; it is usually faster and the packages are not beaten up nearly as much.)

On opening the box I was impressed by the quality of the fiberglass fuselage. It is light (12 oz) for its size and is finished with a white gel coat that is absolutely flawless. There are no pin hole voids or mold imperfections of any kind. The seam between the two halves are tight and smooth to the point that it could have easily been used without any further sanding or painting. I did, however, spend about an hour working on the seam to get it completely smooth.

Inspection of the rest of the kit revealed a plentiful supply of wood and hardware to complete the model. The wood was quite a bit heavier than I would have picked out and on contacting Roland Boucher of Astro Flight, I was told that they, like all model suppliers, were having great difficulty obtaining balsa and that their last shipment was much heavier than they usually supplied. I checked two kits on the shelves of model shops and sure enough the balsa in these kits was much lighter. The hardware kit was complete with all parts needed to complete the model, even down to the hinges and horns for control surfaces.

The plans and set of instructions, including the latest modifications, were complete and detailed. The wing is big, 11 ft wingspan and 950 sq in area. The only thing wrong was the horizontal tail. It is terribly small, about 10% of the wing area. I have been designing gliders long enough to know that this is trouble in the making. After some soul searching I finally decided to build the model as designed, heavy wood, small tail and all and then report the outcome as honestly as I could. I did make some other modifications. I mounted the tail on a 1/16 plywood platform epoxied to the stub vertical tail with nylon screws so it would be easier to install a larger and lighter one at a later time. I also added light fairings to the bottom of the rudder to form a smoother continuation of the body lines.

The big change I made was to add spoilers to the wing to aid in spot landing events. These were 12 in long starting 12 in from the wing root and had 3/4 in chord. The spoilers were mounted just forward on the main wing spar and are actuated by torque rods. I have sent Astro Flight details of these and I think they may describe them in the instructions of future kits.

The construction is very straight forward. The die cutting on the ribs was above average; some of them were a little too tall at the trailing edge, but sanding fixed this. The spruce spars and the leading edge sheeting goes fast and results in wing panels that are strong in both tending and torsion. I put the wash out in the wing panels by completing the installation of shear webs between the spars and then blocking the tip trailing edge up while the top leading edge sheet is put on. This produces a permanent washout, and I think is superior to warping it in as suggested in the instructions, but their way will work. The tail is solid sheet and is precut so a little shaping is all that is required.

A problem did develop when the holes for the main wing wire were drilled in the fuselage. I drilled where they were marked on the body and then found the wing to be way out of line with the body and tail. After discussing this with Roland we came to the conclusion that the body halves are probably warping or shrinking slightly during the curing which upsets the alignment of the marks. He is considering jig drilling the holes at the factory in the future. I would suggest starting with a small pilot hole and then increasing it to full size only after carefully checking the alignment.

I covered the wing and tail with white Monocoat and finished the fuselage and canopy base with primer, wet sanded with 600 paper followed by a coat of white Hobbypoxy and a lot of rubbing compound and elbow grease.

Epoxying the canopy on the base and installing the radio completed the model. At this time I had worked on the model less than 40 hours including the installation of the spoilers. The completed model is big and beautiful. The lines are more pleasing to me than any other sailplane I have yet seen. Mine weighs 66 oz including 8 oz of lead in the nose to balance the model on the forward wing wire as called for on the plans. This is only 2 oz over the value shown on the plans and if lighter balsa was used in the tail I am sure that a couple of oz. could be saved there which would allow the removal of 4 or 5 oz of nose weight and retain the same balance point.

I sure did hate to fly the bird with that small stabilizer and risk tearing it up, but all must be risked in the pursuit of knowledge. So out to the field I went with John Kiker and Tim Brown from our club for moral support and Kirby Henson to take some pictures of the results.

A couple of cautious hand launches with Tim at the transmitter to try to correct any violent tendencies resulted in two nice long glides with no bad traits visible. We strung out my high start and made a couple of very soft launches, 10 to 20 ft altitude. Still no trouble. Higher launches revealed a beautiful flying bird with gentle handling characteristics. The model has a gentle stall without dropping a wing significantly and recovers easily. I still think the horizontal stabilizer is too small, but the model doesn't know it and just flies superbly. After several flying sessions, I experimented with moving the center of gravity and found that any rearward movement of more than 1/8 in resulted in a very rapid deterioration of the flying qualities. I would recommend balancing the model on the forward wing wire as shown on the plans or a little further (1/8 in.) forward.

The spoilers work well. They are not overly sensitive and the nose down trim change is gradual enough so that it is no problem to control even when flying down at low altitudes. As I said before the weight of the model could be reduced by at least 6 oz by using lighter balsa in the tail which would result in a lower sink rate, but at 66 oz the ASW-17 is fully competitive. Roland said that Astro Flight thinks that 60-64 oz is the ideal flying weight.

In summary, the Astroflight ASW-17 is a big, beautiful bird that is fully competitive in performance. I plan to build another one so I can have two for contests next year." 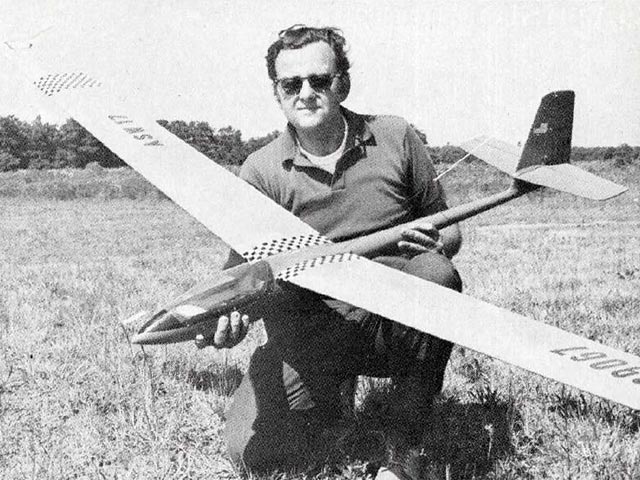 This ASW 17 kit was my second glider after I built the Graupner HI-FLY. It was a pleasure to build. I had many satisfying flights with it. It had one shortcoming in the type of conditions I was flying in which was poor penetration due to the flat bottom wing section. Other than that it was a good upgrade from my first glider. It was a beauty to behold. Unfortunately, I can't find the photo of it.
Ron Ashworth - 23/10/2020
Add a comment